Dams who double up in Group 1s few and far between

Finding a mare good enough to produce a Group 1 winner is extremely difficult; finding one that can produce two even more so. But how many mares have produced two or more winners of the very same top-level race? You can almost count them using the fingers on one hand. Internationally there have been numerous examples over the years but in Britain and Ireland, they occur once in a blue moon.

The last occasion took place at Ascot in 2014, when Noble Mission, trained by Lady Cecil, signed off his career with a neck victory over Al Kazeem in the Champion Stakes. Two years earlier, his big brother Frankel did exactly the same thing, bowing out with a victory in the same race, thus ending a 14-race career undefeated.

Just over a year earlier, the Aga Khan’s smart Darshaan mare Ebaziya produced her second Gold Cup winner when Estimate – gifted to The Queen by the Aga Khan – prevailed by a neck in the 2013 renewal. That famous double had been initiated all of 14 years earlier when the John Oxx-trained Enzeli was steered to victory by Johnny Murtagh in 1999.

Perhaps the most famous double in recent times was completed in 2009 when the brilliant Sea The Stars added another Derby to his famous dam Urban Sea’s burgeoning resume. She, of course, had already produced the 2001 Derby hero Galileo. Has there ever been two more influential stallions produced by the same mare? Possibly not. But two Derby winners from the same mare is a relatively common phenomenon.

“In Britain and Ireland, they occur once in a blue moon”

Windmil Girl’s sons Blakeney (by Hethersett) and Morston (by Ragusa) won the Derby in a four-year period between 1969 and 1973. Though Blakeney had his moments at stud, including with the Classic-winning brother and sister team of Julio Mariner and Juliette Marny, neither stallion ultimately made much of an impact on the breed.

In 1998, Jeff Smith’s Night Shift filly Lochangel landed the Nunthorpe Stakes five years after her older sister Lochsong (by Song) had initiated that rare double under Frankie Dettori. Both were trained by Ian Balding to reach the pinnacle of sprint racing but Lochsong was clearly superior to her younger sister, as their Timeform ratings of 129 and 119 suggest. Unfortunately neither mare managed to pass on their ability to their offspring, Lochsong producing two Listed winners and Lochangel only a Listed-placed gelding.

There could not be a starker contrast with the next set of siblings that won the same Group 1 race. This pair were the back-to-back 1983 and 1984 Cheveley Park Stakes winners Desirable (by Lord Gayle) and Park Appeal (by Ahonoora). Desirable went on to produce 1,000 Guineas heroine Shadayid, while Park Appeal’s major contribution to the breed has been the top-class Cape Cross, sire of Sea The Stars and Golden Horn.

Unfortunately, it was very much a case of failure at stud for our next pair Sally Brown and Untold, daughters of Unsuspected and winners of the Yorkshire Oaks in 1985 and 1986, neither producing a single black-type horse between them. But the same is not totally true for the Dewhurst winners of 1977 and 1983, Try My Best and El Gran Senor.

In reality, neither of these two Northern Dancer colts made a direct impact at stud. Try My Best, however, has thriving sire lines in both Europe and Australia, through his sons Waajib and Last Tycoon. The sub-fertile El Gran Senor was the more accomplished of the two as a stallion with 11 Group/Grade 1 winners to his name, but he has left behind no lasting legacy.

The aforementioned Juliette Marny was also part of a famous double for her dam Set Free. Juliette Marny’s 1975 Oaks victory was followed four years later by that of her half-sister Scintillate, a daughter of Sparkler. Juliette Marny went on to produce four Listed winners and her sister had a Group 2 winner, but neither created lasting dynasties.

That takes us right back to 1969, the year Levmoss won both the Gold Cup and Prix de l’Arc de Triomphe. His dam Feemoss would go on to produce a full-brother by Le Levanstell ten years later. That colt was named Le Moss and he would end up winning Royal Ascot’s premier staying race two years running for Henry Cecil in 1979 and 1980.

Feemoss also had the distinction of being the dam of yet another full sibling to the Gold Cup-winning pair in Sweet Mimosa, who won the Prix de Diane in 1970.

And just to include all mares foaled since 1960, we can add Panaview, the dam of the 1968 and 1970 Irish 1,000 Guineas winners Front Row (by Epaulette) and Black Satin (by Linacre). The Ribot colt Ribero completed the Irish Derby-St Leger double in 1968, one year after his full-brother Ribocco won the same Curragh and Doncaster Classics. 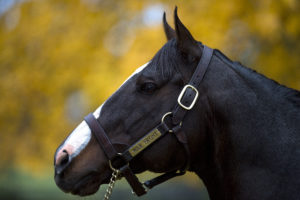 Up Next
Future looks bright for War Front