Bearing in mind that War Front has ranked as America’s highest-priced stallion for the last two years, at a fee of $250,000, it is easy to forget that he was available at one-twentieth of that amount – just $12,500 – when this son of Danzig began his stallion career at Claiborne Farm in Kentucky in 2007.

That comparatively modest fee reflected War Front’s failure to win a Grade 1 event during a 13-race career which had yielded only four wins, with his solitary Graded success coming in the Grade 2 Alfred G. Vanderbilt Handicap over six furlongs. In a country which gave birth to the expression that second place is just the first loser, War Front probably wasn’t greatly helped by having finished second in five Graded sprints as a four-year-old, even if two of these seconds came in Grade 1s.

War Front, who was born when Danzig was 25-years-old, also had to overcome the fact that none of Danzig’s American- based sons had come close to matching the influence exerted by two of their European counterparts in Danehill and Green Desert. Many had tried.

However, with the support of a syndicate which featured his breeder Joseph Allen, War Front has developed into the true heir to Danzig’s throne at Claiborne (even if his percentage of black-type winners, which stood at 12% at the end of 2019, falls short of Danzig’s 18%, achieved in a very different era).

Declaration Of War: is one of War Front’s sons who is drawing attention to themselves – Photo: George Selwyn

The question now, with War Front already 18-years-old, is whether his success as a sire of sires is going to mirror that of the great Danzig. As with all stallions, there have been some hits and some misses (such as War Command) among War Front’s older sons, but the overall picture is definitely encouraging.

Two sons from War Front’s eye-opening first crop did well enough to earn places at leading Kentucky studs. Data Link, a Grade 1 turf mile winner who joined his sire at Claiborne as a fee of $7,500 in 2014, was pensioned at the age of 11 in 2019 and has yet to sire a Graded stakes winner.

There has been better news of The Factor, a grey son of War Front who shone at around seven furlongs in California, where his victories included the Grade 1 Pat O’Brien Stakes and Malibu Stakes at three and Grade 2 San Carlos Stakes the following year.

Despite the presence of the Grade 1-winning two- year-old Noted And Quoted in his first crop, The Factor made a rather quiet start with his first two crops and he was leased to Japan for the 2018 season.

Fortunately, he enjoyed something of a breakthrough year in 2019, ranking as high as 14th on North America’s leading sires’ list, with the help of 13 black-type winners, led by the Grade 1-winning sprinter Cistron. The Factor also finished as high as seventh among North America’s turf sires, so he may be following in the footprints of his sire, another dirt performer whose progeny are often at home on a variety of surfaces.

A couple of War Front’s sons from his second crop – Declaration Of War and Summer Front – are also drawing attention to themselves.

Although Declaration Of War’s record stood at four wins from five starts by the end of his three-year-old season, it wasn’t until his demanding four-year-old campaign that he showed an enviable combination of talent and toughness, combined with admirable versatility in terms of distance and racing surfaces.

He won the Group 1 Queen Anne Stakes over a mile before adding a second Group 1 success in the Juddmonte International. He also covered himself in glory when returned to his native land for the Breeders’ Cup Classic, handling the fast dirt course so well that he was beaten only a nose and a head by the dirt specialists Mucho Macho Man and Will Take Charge.

Rather like Giant’s Causeway, another Coolmore star who went close to landing the Breeders’ Cup Classic, Declaration Of War was transferred to Coolmore’s American branch at Ashford Stud after only one year in Ireland.

By October 2018, though, an announcement was made that he would stand the 2019 season at the Japanese Bloodhorse Breeders’ Association’s Shizunai Stallion Station. This now looks to have been a one-way ticket, as there has been no return to Kentucky.

The motivation for the move probably stemmed from a combination of factors. His Irish crop hadn’t exactly set the Liffey on fire, even though it contained Olmedo, winner of the 2018 Poule d’Essai des Poulains, and the speedy Group 3-winning filly Actress. His cause probably also wasn’t helped by the fact that turf appeared to be the preferred surface of several of his best American runners, such as Speed Franco, Opry and Uncle Benny.

A ticket to Japan has often kickstarted a stallion’s career, and so it has proved with Declaration Of War. His six northern hemisphere Graded/Group winners in 2019 featured four two-year- olds and Declaration Of War ranked fourth behind Into Mischief, American Pharoah and Uncle Mo among North America’s leading sires of juveniles. One of these juveniles, Silver Prospector, won this year’s Grade 3 Southwest Stakes to put himself on the disrupted trail to the Kentucky Derby.

Declaration Of War had also shuttled to Australia for two seasons, standing the 2014 season at AUS$27,500 and the following year at only $24,750. Although he is credited with the comparatively modest total of 155 live foals, that hasn’t stopped him making a considerable splash.

First to hit the Group 1 target was the filly Winning Ways, who landed the Queensland Oaks. Next came the three-year-old gelding Warning, who was a decisive winner of the Victoria Derby, and then came his greatest triumph, when Vow And Declare, repelled the foreign raiders to take the Melbourne Cup.

Perhaps significantly, Declaration Of War’s trio of Australian Group 1 winners have all shown they stay better than their sire, with two of them receiving help from their broodmare sire Galileo. Declaration Of War’s French classic winner Olmedo has now been transferred to Australia and it will be interesting to see whether he can return to Group 1-winning form. 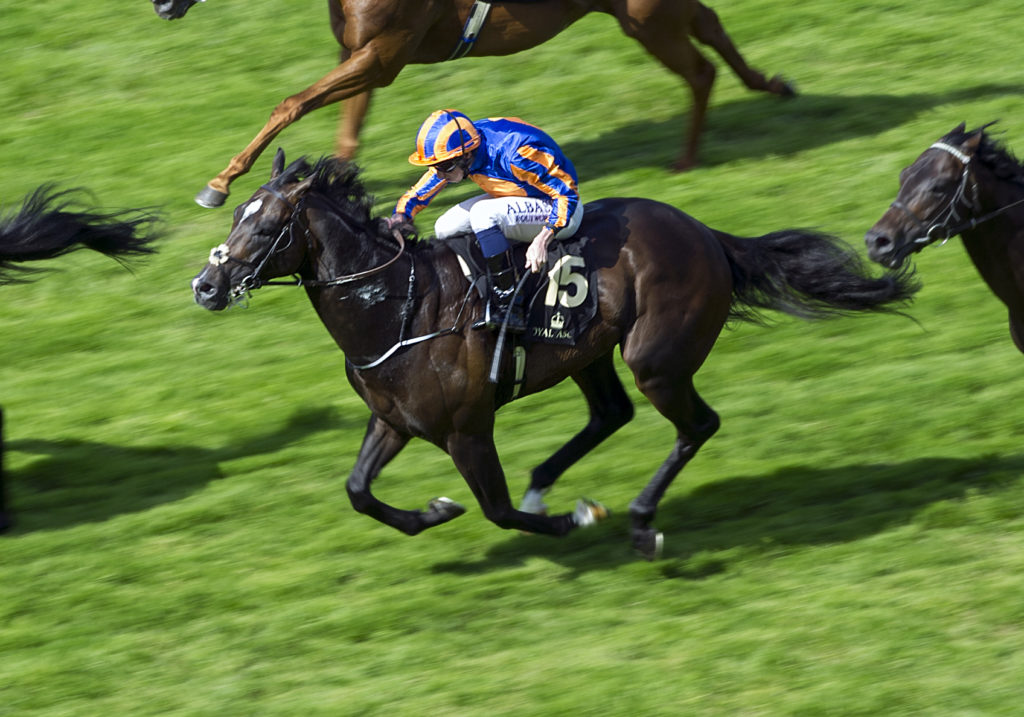 Due Diligence: stands at Whitsbury Manor Stud and repaid their faith with a pair of Group 3 winners from his first crop – Photo: George Selwyn

Whereas Declaration Of War took up stud duties when he was five, the good-looking Summer Front had to wait until he was seven. It was a bold decision by Brereton C. Jones and his family to add him to the stallion roster at their Airdrie Stud, an operation with a reputation for making stallions.

Summer Front hadn’t won a Grade 1 and he had spent most of his career racing on turf, as might be expected of a War Front colt with a dam by El Prado. What he had done was win all three of his starts as a two-year-old, including a couple of stakes races over a mile, and he had been rated 115 on the Experimental Free Handicap. He also trained on so well that he enjoyed Graded stakes success at the ages of three, four and five, earning in excess of $1 million.

Fighting Seabee became his first Graded winner when he landed the Grade 3 With Anticipation Stakes on turf as a two-year-old, but the colt who promises to put Summer Front on the map is Ete Indien. With a dam by Mizzen Mast, Ete Indien has won on turf and dirt and this €240,000 Arqana purchase scored by more than eight lengths in the Grade 2 Fountain of Youth Stakes.

Another of 2019’s successful first crop stallions was War Front’s son Due Diligence, who started his racing career with a victory at Saratoga as a juvenile before being switched to Ireland. Although very capable – as illustrated by a Timeform rating of 120 – Due Diligence won nothing better than a Listed race and he’s best judged on his second to Slade Power in the Grade 1 Diamond Jubilee Stakes.

The Whitsbury Manor team took a chance with him and he repaid their faith with a pair of Group 3 winners and a Listed winner among his 85 first-crop foals, sired at £6,500.

He clearly has plenty of potential, but a degree of patience may be required, as his second crop numbers just 39 foals and his third and fourth crops are even smaller. Hopefully he is receiving much stronger support in 2020, at his increased fee of £8,500.

War Front’s prowess as a sire of sires will soon undergo further testing, as the Group 1 two-year-old winners Air Force Blue and Hit It A Bomb both have their first juveniles racing this year. Both have had their moments in the sales ring, with Air Force Blue’s yearlings selling for up to $400,000 and his two-year-olds for up to $390,000. Hit It A Bomb, who stands for only $5,000 at Spendthrift Farm, had a two-year-old sold for $200,000.

We also have the tough-as-teak U S Navy Flag to look forward to, with this winner of the Middle Park Stakes, Dewhurst Stakes and July Cup having the added attraction of having a dam by Galileo.

Then there’s the very highly regarded Omaha Beach, a Grade 1 winner of the Arkansas Derby, Santa Anita Sprint Championship and Malibu Stakes who is the U.S.’s highest priced new stallion this year, at $40,000. 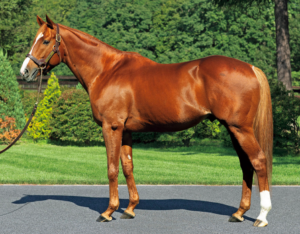 Up Next
Lucky Lilac a shining advert for Japanese star Orfevre