The word was Bobby Frankel thought the world of Binary, and although in the US she only managed a allowance race victory, she is proving to be influential as a broodmare

During my long innings as consultant to Juddmonte Farms, literally thousands of foals and yearlings were paraded for my inspection. My duties included the American branch for several years and viewing the young stock often represented a test of stamina, involving long hours in the glare and heat of a Kentucky summer. In the circumstances I think I can be forgiven for not remembering some of the youngsters, such as a 2003 Distant View filly out of Rainbow Quest’s daughter Binary. No doubt I should have remembered her better, as this filly – Foreign Language – now ranks as the second dam of unbeaten Derby winner Desert Crown.

However, a delve through my filing cabinets unearthed my photographs and notes. Foreign Language was the 70th of the 82 yearlings I saw that day. She struck me as attractive and – like her sire – was strong, rather short-coupled, with good depth. However, she had also inherited faults from  each of her parents. Although Distant View was a top-class miler, this son of Mr Prospector was far from correct in front. Consequently, it was arguably tempting fate to send him a daughter of Rainbow Quest, another who was often an influence for less-than-perfect knees.

Because of the conformational risks involved, the Distant View-Rainbow Quest pairing was tried only sparingly, with two of the five foals being out of Binary. The first, a colt called Binary Vision, made his debut for John Gosden in a mile maiden race at York in June 2004 and he was impressive, striding seven lengths clear under hand riding to establish himself as a bright prospect. Sadly, he was to race only once more, with a cannon bone fracture ending his career.

His sister Foreign Language never raced for Juddmonte and was sold for 18,000gns in the July of her two-year-old season, in 2005. Put into training with Neville Callaghan, she carried a 7lb claimer called William Buick to victory in a maiden race over an extended mile at Wolverhampton late the following year.

Although Desert Crown’s third dam Binary had moderate foreleg conformation, that didn’t prove any hindrance during her time with Andre Fabre. A debut winner at Longchamp and a Listed winner over 2,000 metres at Saint-Cloud, Binary also went within a short neck of becoming a Group 3 winner in the Prix de Psyche. The next step was to send her to the US to be trained by Bobby Frankel, with part of the motivation being the outstanding achievements Frankel had enjoyed with the similarly-bred Wandesta. Both of these big, strong fillies were sired by sons of Blushing Groom and Binary’s dam Balabina was a sister to Wandesta’s dam De Stael, both being by Nijinsky out of Peace, whose descendants have served Juddmonte tremendously well for decades.

Whereas Wandesta was transformed from being just a Listed winner in Britain into a champion turf mare in the US, Binary won only a nine-furlong allowance at Santa Anita. The word was that Frankel thought the world of Binary and she proved to be a much better broodmare than the disappointing Wandesta, perhaps helped by the fact that she represented a nick which produced an impressive 18 per cent black-type winners.  Rainbow Quest also sired the Derby-winning Quest For Fame from a granddaughter of Nijinsky.

From seven foals, Binary produced three sons – Binary File, Hawksbill and Binary Vision – which respectively achieved Racing Post ratings of 115, 110 and 103. Foreign Language was the only winner among her four daughters,  but one of the others was Binche, who was also sired by a son of Mr Prospector. Binche went within inches of becoming one of those blue hens with three Group/Grade 1 winners to her credit. Her Dansili filly Proviso became a four-time Grade 1 winner in the US; her Peintre Celebre colt Byword won the Prince of Wales’s Stakes; and Finche, by Frankel, scored at Group 2 level in France before being narrowly beaten in a couple of Group 1s over a mile and a quarter in Australia. Finche’s brother Baratti became Binche’s fourth black-type winner at Longchamp in April. Binche’s daughter Zatsfine is also keeping up the good work, her first two foals being the black-type winners Environs and Delaware.

Desert Crown isn’t the first notable performer descending from Foreign Language, as his dam, the mile winner Desert Berry, has also produced Archie McKellar, a useful two-year-old of 2017 who went on to earn a lot of money as Flying Thunder in Hong Kong. 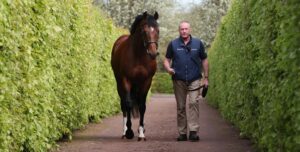 Up Next
Churchill taking flight to add to Galileo's dominance