Deirdre strikes a blow for Harbinger 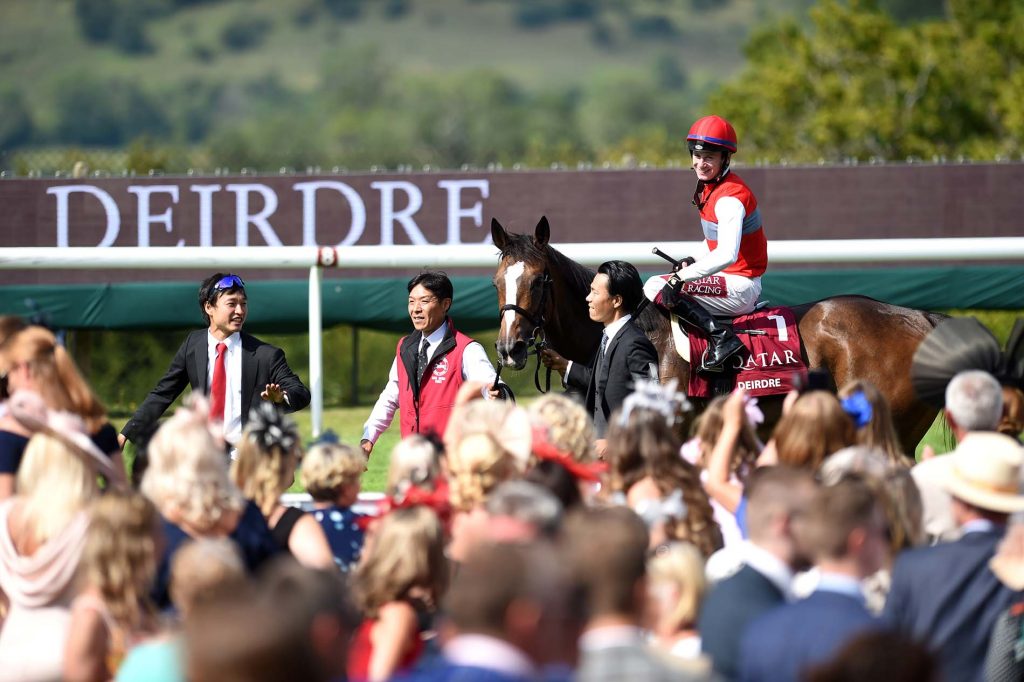 Deirdre and Oisin Murphy after their victory in the Nassau Stakes at Goodwood last week – Photo: George Selwyn

Ever since the days of Taiki Shuttle and El Condor Pasa, the message has been ignore Japanese runners at your peril, something that again rang out loud and true as Deirdre ran down Mehdaayih to grab Thursday’s Nassau Stakes at Goodwood for Japan.

Only two days before, the Japanese racing world had been plunged into mourning by the death of Deep Impact. Deirdre isn’t connected to the late supersire as such, but hers was a victory that once again underlined the strength of the Japanese industry on the world stage, a place fuelled by the remarkable influence of Sunday Silence and then his best son, Deep Impact.

However, although Deirdre carries a Japanese suffix, there is a familiar aspect to the mare thanks to a pedigree that represents a fusion of the Sir Michael Stoute stars Harbinger and Sonic Lady.

Anyone with a fine memory of Harbinger will appreciate the physical resemblance that Deirdre, certainly the strongest runner within the Nassau field, bears to her sire. A big, strong son of Dansili, Harbinger was patiently handled by Stoute, winning the Gordon Stakes on only his third start at three before sweeping the John Porter Stakes, Ormonde Stakes, Hardwicke Stakes and King George at four. It was the latter race, in which Highclere Thoroughbred Racing’s colt powered 11 lengths clear of the Epsom and Irish Derby winners Workforce and Cape Blanco, that sealed his position as the highest rated horse of 2010 by world rankings and the best four-year-old to grace European turf since Alleged some 32 years before; by then, though, Harbinger was in Japan, ready to commence his stud career at the Yoshida’s Shadai Stallion Station off the back of ‘a multi million dollar deal’.

Injury had cut short Harbinger’s racing career just days after his King George romp, and his sale to the Yoshida’s Shadai Group had been unveiled not long after.

“Harbinger was extremely well received by breeders from the outset”

In another era, his export would have been greeted with much dismay. As it was, while there was undoubtedly some disappointment, we are all aware of the commercial market’s current perception of the 1m4f horse, particularly one who failed to make the track at two.

By contrast, Harbinger headed to a market in Japan that isn’t so wrapped up in two-year-old racing and appreciates real stayers – look no further than Deep Impact, who won the Group 1 Tenno Sho Spring over two miles at Kyoto. He also remains the only son of Dansili at stud in Japan, thereby making him an appealing outlet to the vast number of Sunday Silence-line mares within the Japanese population.

Even so, the story of Harbinger’s second career is also a lesson of patience and perseverance.

Although now an established top ten Japanese stallion, it wasn’t as if he was an overnight success, especially in light of the opportunities afforded to him.

Harbinger was extremely well received by breeders from the outset, covering 211 mares in his first season at Shadai and another 222 in his second. Come the end of 2014, he was Japan’s leading first-crop sire by earnings. However, he had the advantage of more runners than any of his contemporaries, and those large numbers were also at play when he ended 2015 as the country’s leading second-crop sire.

Those championships are fine accolades but perhaps alarmingly, just one Group winner, Group 3 scorer Beruf, emerged out of a first crop that numbered 148 foals. And today, that group contains just three stakes winners.

A larger second crop of 167 foals is the source of another four stakes winners but as with the preceding group, no representative has won beyond Group 3 level. 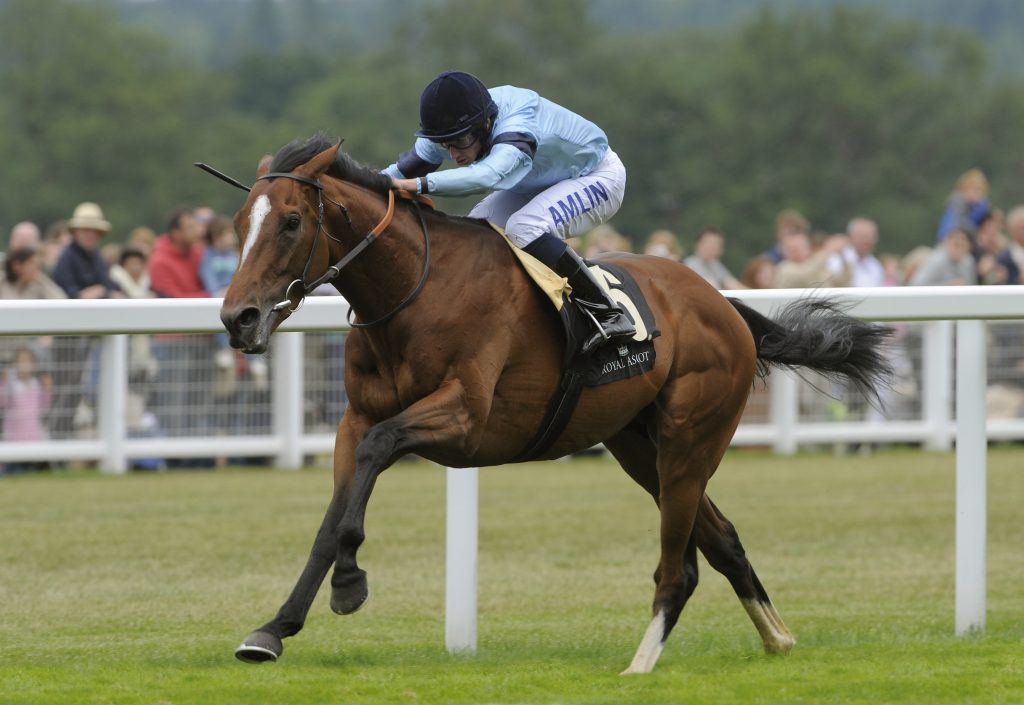 The story of Harbinger’s second career is also a lesson of patience and perseverance – Photo: George Selwyn

But then a major upturn in fortunes followed, primarily due to a powerful third crop that contributed to a breakthrough season in 2017.

That autumn, Harbinger was represented by three Group 1 winners in quick succession starting with Deirdre, who became his first runner to strike at the top level when successful in the Shuka Sho at Kyoto. A month later, another daughter, Mozu Katchan, landed the Queen Elizabeth II Commemorative Cup before Persian Knight capped the year with victory in the Mile Championship at Kyoto.

Each hailed from a third crop that numbered 118 foals and crucially both Deirdre and Persian Knight highlighted a growing affinity with the Sunday Silence line; while Deirdre is out of a daughter of Special Week, Persian Knight is out of a mare by the great stallion himself.

Since then, Harbinger has scaled Group 1 heights again as the sire of last year’s Arima Kinen winner Blast Onepiece, who shares his damsire, fellow Shadai heavyweight King Kamehameha, with Mozu Katchan, and Normcore, who captured this year’s Victoria Mile at Tokyo. While the latter is out of a mare by Kurofune, her second dam is also a daughter of Sunday Silence. Indeed, of his 17 stakes winners, 15 contain Sunday Silence somewhere in their background.

Harbinger’s popularity waned for the 2016 season, the year his first crop turned four and matters still looked dicey, meaning that he has only 64 two-year-olds on the ground. However, he covered 212 mares last season and was undoubtedly popular again this year at a fee of 6,000,000yen (£46,300), especially in light of the enforced absences from the Shadai roster of Deep Impact and King Kamehameha.

Deirdre is the latest star to hail from the behemoth that is Katsumi Yoshida’s Northern Farm, also responsible for other Group 1 winners Loves Only You, Lys Gracieux, Admire Mars, Gran Alegria and Al Ain over the course of this year alone.

She was bred by the farm out of the placed Reizend, also dam of the Listed-placed Odysseus. By Japanese Derby and Japan Cup winner Special Week, Reizend didn’t show a lot in four starts in her home country but as is typical of a Northern Farm inmate, boasted a pedigree out of the top drawer. Her dam, Soninke, was a British-bred daughter of Machiavellian and the final foal out of that brilliant miler Sonic Lady. Yet Soninke spent her entire stud career based in Japan for Northern Farm, for whom she left behind eight winners led by the Grade 3 scorers Northern River and Renforcer. Another daughter, Acoustics, foaled 2009 Japanese Derby hero Logi Universe.

While Harbinger encapsulated Stoute’s patient management, Sonic Lady represented another aspect to the trainer’s finesse. By all accounts, Sheikh Mohammed’s daughter of Nureyev, a $500,000 yearling, wasn’t easy, at times running too keen to do herself justice, as she did when third to Midway Lady in the 1986 1,000 Guineas. Sonic Lady had arrived at the race in possession of a big home reputation backed up by a pair of bloodless wins in the Blue Seal Stakes at Ascot at two and the Nell Gwyn Stakes at Newmarket on her three-year-old reappearance. Given how she failed to settle that day, that close third to a stronger stayer in Midway Lady was a creditable effort and subsequently fitted with a different bridle, she proceeded to land the Irish 1,000 Guineas, Coronation Stakes, Child Stakes, Sussex Stakes and Prix du Moulin. An unplaced effort behind Last Tycoon, albeit in a close seventh, in the Breeders’ Cup Mile represented a quiet end to an outstanding season.

Sonic Lady stayed in training as a four-year-old, and won a second renewal of the Child Stakes – a race won by her dam Stumped for Bruce Hobbs in 1980 – before running third behind Miesque in the Breeders’ Cup Mile.

A brilliant miler armed with an excellent turn of foot, Sonic Lady left behind only three winners but each were high-class, led by the Blushing Groom pair Hazaam, winner of the 1992 Supreme Stakes, and French Group 3 winner Sharman. Another colt, Soninke’s brother Mudallel, was a Listed-winning sprinter in Dubai while the unraced Cosmonaut, by Mr Prospector, sired several winners from his time at Collin Stud in Newmarket.

The family goes back to 1966 July Cup winner Lucasland, also the fourth dam of Attraction. Thus, it has never been far from the spotlight and in Deirdre, it is now behind yet another popular mare of great status and durability.

Up Next
Glittering array of yearlings slated for Fasig-Titpon Saratoga