There is nowhere quite like Saratoga, that small resort town north of New York City. Every summer, it becomes the focus of the North American racing scene, its name synonymous with high-class action. Year in, year out, the racing world descends upon the town to enjoy the meet, some as participants hoping for a slice of Saratoga glory or fans in appreciation of quality sport. And while those high stakes are being played out on the track, for one August week there is also plenty to play for in the Humphrey S. Finney Sales Pavilion, just minutes away on the Fasig-Tipton sale grounds.

The Fasig-Tipton Saratoga Sale is one of a kind among auctions in the US. As Lucas Marquardt so well outlined in his appreciation of Saratoga in the July issue of Thoroughbred Owner Breeder magazine, it “can boast of being the most consequential boutique sale in the US… and certainly the chicest.”

Staged across two evenings on August 5 and 6, the Saratoga resume of recent Grade 1-winning graduates reads like a who’s who of American racing. For instance, in 2013 you could have walked away with American Triple Crown hero American Pharoah, who was knocked down unsold at $300,000, while the previous year featured Robert Masterton’s $140,000 purchase of Tepin, whose victory in the Queen Anne Stakes at Royal Ascot saw her join rarefied company among America’s elite. Another great American mare, Songbird, was among those to change hands in 2014 when sold for $400,000 to Fox Hill Farm. Then there was the subsequent Belmont Stakes winner Tapwrit, who topped the sale in 2015 when sold for $1,200,000 to Bridlewood Farm, Eclipse Thoroughbreds and Robert La Penta.

As ever, it is a catalogue that boasts representation from the cream of the American stallion ranks – think War Front, Tapit, Medaglia d’Oro, Quality Road, Into Mischief, Uncle Mo and Curlin. An international flavour is also added by the presence of yearlings by Galileo and Zoffany; the latter, bred by Newstead Breeding Ltd, is a granddaughter of Lord Howard de Walden’s Yorkshire Oaks heroine Catchascatchcan.

The sale also provides an early chance to assess the better progeny of those younger stallions coming through the system.

The Darley-based pair Frosted and Nyquist emerged with real credit out of the recent Fasig-Tipton Kentucky July Sale, at which they fired in averages of $228,750 and $153,333 respectively. Runaway Metropolitan Handicap winner Frosted has 13 yearlings to represent him at Saratoga, including the half-siblings to Group/Grade 1 winners Dance With Fate (7; colt) and Mozu Ascot (24; filly), while the nonet by Kentucky Derby and Breeders’ Cup Juvenile hero Nyquist include the half-siblings to Graded stakes winners Native Bombshell (6; colt), Ever So Clever (8; filly) and Unspurned (184; colt) alongside a colt out of the Grade 1-placed All Due Respect (167).

Claiborne Farm’s Runhappy, who lit up the 2015 Saratoga meet with his romp in the King’s Bishop Stakes, is represented by a half-brother to multiple Grade 2 winner Kobe’s Back (154), while $14.7 million earner California Chrome, another American icon whose seven Grade 1 victories included the 2014 Kentucky Derby and Preakness Stakes, has a colt out of Grade 1 winner Magnificent Song (55) among his four entries.

Grade 1 winners Air Force Blue, Big Blue Kitten, Brody’s Cause, Exaggerator, Mshawish and Outwork are among the other first-crop sires with Saratoga representation. As for American Pharoah, whose first crop of runners already includes three stakes runners, he is one of the most heavily represented sires thanks to nine entries.

Below is a selection of other yearlings in possession of a page capable of lighting up the bid board.

Another filly in possession of an active family as a daughter of multiple stakes producer Promenade Girl, herself winner of the Grade 2 Molly Pitcher Breeders’ Cup Handicap and Grade 1-placed.

Promenade Girl has fared particularly well when crossed with the A. P. Indy sire line, as the records of two of her progeny, Cavorting Girl and Thirstforlife, attest; multiple Grade 1 winner Cavorting is a daughter of Bernardini while the Grade 2-placed Thirstforlife is by Stay Thirsty. And keeping this page particularly active are the current exploits of her three-year-old half-brother Moon Colony, recent winner of the Grade 2 Penn Mile Stakes.

This filly is one of seven entries by Gainesway Farm’s champion sire Tapit.

One of the most memorable moments of last year’s Saratoga meet came with the victory of that popular New York-bred Diversify in the Grade 1 Whitney Handicap. The hard knocking gelding was adroitly managed by Rick Violette, who was present to watch his fan favourite charge through the slop that day to win as he pleased; sadly Violette lost his battle with cancer later that autumn.

Ten-time winner Diversify was retired earlier this year as the winner of close to $2 million. In addition to the Whitney, he also struck in the Grade 1 Jockey Club Gold Cup and Grade 2 Suburban Stakes.

As such, there should be plenty of interest in his younger half-brother when he takes his turn in the ring as lot 104. By More Than Ready, one of those rare stallions to crack it in both hemispheres, he is the fifth foal out of his dam and also comes armed with the additional allure of being a
New York-bred.

War Front looks set to again assume a prominent role in proceedings thanks to a well-connected pair of fillies. They include lot 123, the half-sister to Ed Stanco’s Kentucky Oaks heroine Princess Of Sylmar.

Princess Of Sylmar sprang a 39/1 upset that day at Churchill Downs but went on to prove that was no fluke by following up in the Grade 1 Alabama Stakes at Saratoga and Grade 1 Beldame Invitational Stakes at Belmont Park. The daughter of Majestic Warrior was later sold for $3.1 million to join Shadai Farm and duly has several foals by Deep Impact to run for her in Japan.

This filly, bred by Barronstown Stud, is the sixth foal out of the stakes-placed Storm Dixie, herself a half-sister to Group 3 winner Rhythm Band. 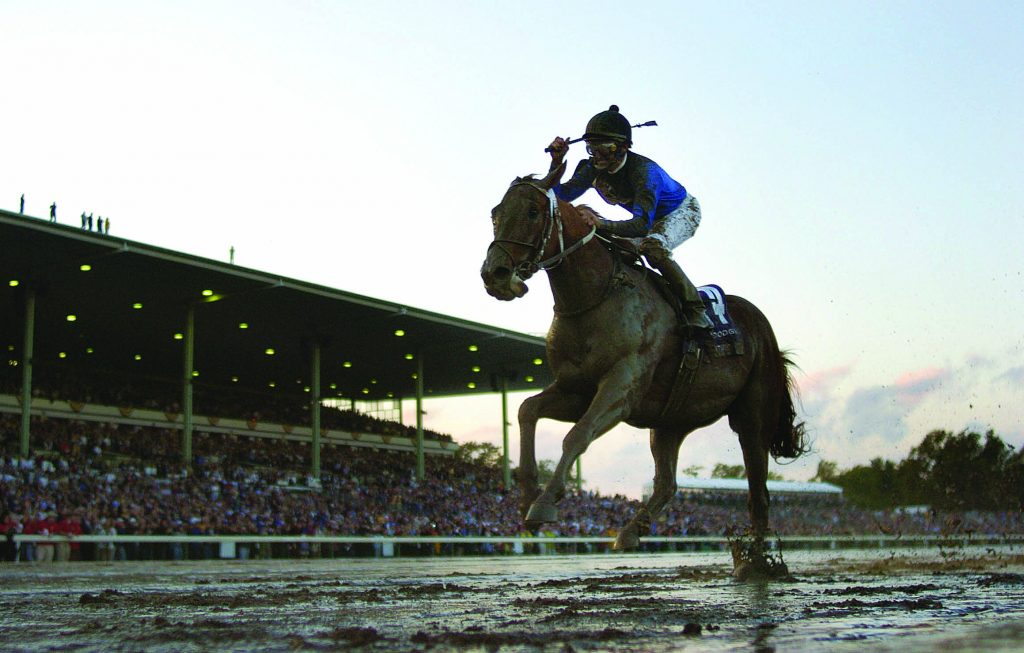 Curlin is a former Horse of the Year – Photo: Bill Selwyn

A power-packed draft for Hill ’n’ Dale Farm’s Curlin, bred the year his fee rose to $150,000, could well see the former Horse of the Year assume top spot as the sale’s leading sire.

For starters, he is represented by this colt, the first foal out of Grade 1 winner Taris who was bred by Heider Family Stables. Taris commanded $2.35 million in November 2014 from the Coolmore partners through Simon Callaghan following her win in the Grade 2 Raven Run Stakes. That swiftly proved to be money well spent as she went on to take the Grade 1 Humana Distaff Stakes and Grade 2 La Canada Stakes for the Callaghan barn.

Meanwhile, the next Curlin into the ring, a filly from Lane’s End Farm, boasts a particularly international pedigree as the third foal out of Twirl. Trained by Aidan O’Brien to win at Listed level, Twirl is a Galileo sister to champion Misty For Me, herself the dam of U S Navy Flag and Roly Poly.

The international theme is continued by lots 153, a colt who is the first foal out of Chilean champion Wapi, and 193, a colt out of Grade 1 Vanity Handicap heroine Byrama, a British-bred daughter of former Darley stallion Byrama.

Curlin’s powerful draft is rounded out by a sister to one of his best runners, Exaggerator. The colt’s glittering career for Keith Desormeaux included victories in the Preakness Stakes, Haskell Invitational and Santa Anita Derby. As such, he has been popular with breeders at WinStar Farm in Kentucky, where he stands for $30,000. Exaggerator himself is represented by five yearlings at Saratoga, starting with lot 1, a half-sister to Grade 2-winning two-year-old Corfu.

Artemis Agrotera was one of the star acts of the 2014 Saratoga meet for trainer Michael Hushion, her two victories that summer highlighted by a six-and-a-half length win over My Miss Aurelia in the Grade 1 Ballerina Stakes.

One of the best runners left behind by Roman Ruler, Artemis Agrotera later went on to land the Grade 2 Gallant Bloom Handicap to bring her earnings just shy of the million-dollar mark.

Lot 178 is her second foal after the Tapit colt Chestertown, who commanded $2 million from West Point, Masiello and Sierra Farm at this year’s OBS March Two Year Olds in Training Sale in Florida.

Incidentally, the catalogue also contains the progeny of another Saratoga Grade 1 winner of yesteryear in Embellish The Lace, the 2015 Grade 1 Alabama Stakes heroine. Her second foal, a daughter of Pioneerof The Nile, is catalogued as lot 218 from Bluewater Sales.

The sole yearling by European supersire Galileo catalogued, this Irish-bred was knocked down for €170,000 to Glenvale Stud at last year’s Goffs November Sale.

Officially bred by Coolmore, he is a half-brother to two winners led by William Haggas’ Lowther and Princess Margaret Stakes heroine Besharah. However, the further reaches of this family should resonate with an American audience, given that it includes a pair of Grade 3 Mint Julep Handicap winners in his granddam Kiss The Devil and her accomplished daughter Kiss Moon. 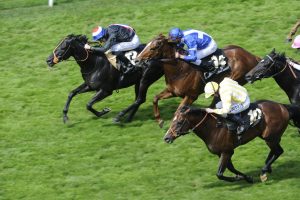 Up Next
A'Ali another gem for much-missed Society Rock