I was recently asked by a fellow of tender years to name the most significant innovation in racing during my innings as a chronicler of the Turf.

I might have said all-weather tracks. I might have nominated Sunday racing. I might have chosen trainers’ licences for women, or female jockeys. The coming of the Pattern could have been another option. I’ve been at this game for so long, I might even have opted for starting stalls, which were nowhere to be seen in my days as a cub reporter.

But when I turned my focus on individual races that weren’t around when I started out one came immediately to mind – an event that was the subject of fevered speculation for weeks before it arrived in the calendar, that caused a seismic shock when staged for the first time, and is now approaching its half-century as the contest that routinely rates as the brightest highlight of the sport in August.

The race is in its second incarnation now, long celebrated as the Juddmonte International, but it began life as the Benson and Hedges Gold Cup in an age when cigarette manufacturers were not regarded as purveyors of deadly diseases and those of us who smoked were not treated as pariahs.

Racing was grateful for any new sponsor in 1972, the more so for the liberal injection of prize-money that promised to provide York with a stirring contest featuring the very best of inter-generation rivalry.

Whether the innovation sold more cigarettes, who knows? But rarely has a sponsored event generated more publicity in the anticipation, in the enactment, and in the aftermath. It had all the hallmarks of a marketing man’s dream.

The backstory had its origin in the 2,000 Guineas of 1971, which was supposed to play out as a match between Mill Reef and My Swallow, but saw both upstaged in a sparkling display by Brigadier Gerard. There was no doubting the Brigadier’s superiority on that occasion over the Rowley Mile, but as he and Mill Reef both enjoyed extended successful runs thereafter, the public craved a re-match, perhaps over a different distance.

“It had all the hallmarks of a marketing man’s dream”

Most of the 37 turf writers entrusted with choosing the Racehorse of the Year for 1971 elected to ignore the Guineas form. There were only two nominees and Mill Reef was proclaimed champion, 30 votes to seven. The feeling must have been that he had won more glamorous races; there was no logic to the verdict.

What needs stressing is that Mill Reef and Brigadier Gerard were not just good horses. They were exceptional horses, each awarded a Timeform mark of 141 at the end of their three-year-old season. Search for a precedent was futile.

I had witnessed Nijinsky’s Triple Crown triumphs in 1970, the first such feat for 35 years, little imagining that two colts from the very next crop would rank above him. What a privilege it was to be a racegoer in those seasons!

There seemed to be reason to believe that a second clash between Mill Reef and Brigadier Gerard would materialise in their four-year-old campaign. They had targets in common, according to their connections, and the names of both duly appeared among entries for several Group 1 events. It was surely just a case of when their paths would cross. 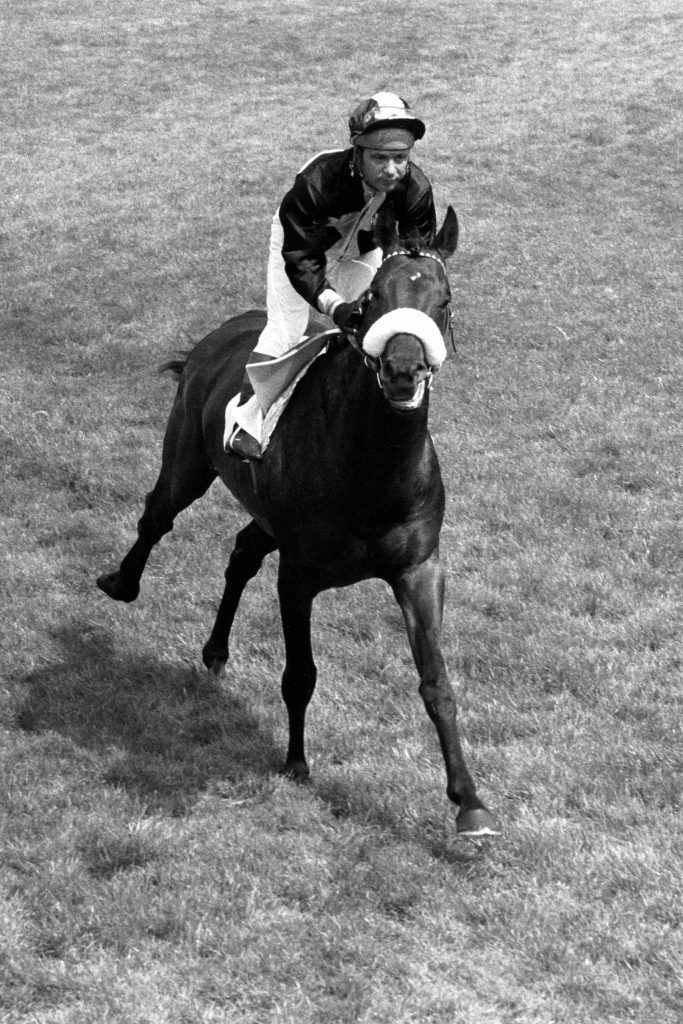 Mill Reef: developed a swollen hock which ruled him out of the Benson and Hedges Gold Cup

Mill Reef opened his campaign with an outstanding display in the Prix Ganay at Longchamp at the end of April. His ten-length rout of Amadou on that occasion suggested that he was every bit as good as on his previous visit to that course, and towards the end of May Brigadier Gerard collected victories in the Lockinge Stakes at Newbury and the Westbury Stakes at Sandown Park. While less than spectacular in those races, he preserved his unbeaten record comfortably enough and gave the impression that there was better to come. And so there was.

However, Mill Reef’s next venture, in the Coronation Cup, did not result in the romp expected of him. He had only three to beat, including his own pacemaker, Bright Beam, starting at the prohibitive odds of 2-15, and when he drew alongside Homeric a furlong and a half from home, everyone expected him to burst clear for an authoritative triumph.

It was not to be. The blinding acceleration he had displayed in the Ganay was missing, and Geoff Lewis had his work cut out to preserve a neck advantage at the line. This was not the real Mill Reef. He had to be sickening for something.

Sure enough, Mill Reef was soon laid low by a virus that affected many of his stable companions at Kingsclere. The eagerly anticipated clash with Brigadier Gerard, set for the Eclipse Stakes, was now in jeopardy.

The Brigadier tuned up for Sandown with a five-length score in the Prince of Wales’s Stakes at Royal Ascot and when news came that Mill Reef would not be ready for the engagement, the outcome of the Eclipse was a foregone conclusion.

The King George also went by without Mill Reef, and Brigadier Gerard, in his first attempt at a mile and a half, won it with less than his usual authority. The latest postponement of the re-match meant a further rescheduling, this time to take place in York’s new headline event.

“The upstart villain Roberto was three lengths clear at the finish”

Again there was disappointment, as after Mill Reef had finally returned to a full training regime, he developed a swollen hock. No sooner had the media labelled the coming Benson and Hedges Gold Cup ‘the race of the century’, it was off again.

Still, it wasn’t as though the York contest had suddenly lost all meaning. Brigadier Gerard had won his first 15 races, and was bidding to match Ormonde and Ribot, who had each registered 16 wins in an unbeaten career. It did not seem to matter that he would be opposed by Roberto and Rheingold, the one-two from the latest Derby. The Brigadier was a 1-3 shot, while Rheingold, recent winner of the Grand Prix de Saint-Cloud, found limited support at 7-2. Roberto, who had finished down the field in the Irish Derby, was neglected at 12-1.

Lester Piggott, who had won the Derby on Roberto, preferred Rheingold this time, while Panamanian-born Braulio Baeza, who had never ridden in England, was the surprise choice as Roberto’s new partner. An upset did not look likely.

How wrong we were in making that assumption. Baeza drove Roberto into a clear lead six furlongs from home and his mount kept galloping strongly. The Brigadier mounted a challenge under Joe Mercer’s urging, but fully a quarter mile from home it was evident that the runaway Roberto was not for catching. The upstart villain was three lengths clear at the finish, having shaved nearly two full seconds off the course record.

It was not too much to suggest that the result left a nation in shock. Nearly half a century later I find it hard to name another race that had such a stunning impact on all who witnessed it.

Brigadier Gerard won two more races to wind up with a career record of 17 wins from 18 starts. Mill Reef was never seen in public after the Coronation Cup, his career ending as the result of a fractured near-foreleg that required pioneering surgery to save him for what turned out to be an illustrious innings at stud.

Timeform favoured Brigadier Gerard at the end, awarding him a rating of 144 – second-best only to Sea-Bird (145) at the time – with Mill Reef on 141.

The race that made such a sensational debut in 1972 has proved an outstanding fixture in the calendar ever since, with memorable performances by such as Sea The Stars and Frankel among the highlights. Chances are that the 2019 version will give us something worth remembering this month. 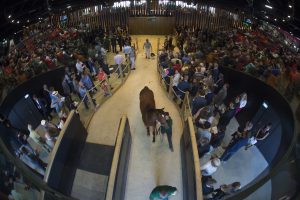 Up Next
Optimism runs high ahead of Arqana August Sale