Through the ages, a wide variety of techniques have been used in the suspect business of divination, ranging from sacrificing goats to the less messy tarot cards. For me, though, it’s the entries for the four French Classics (plus the Grand Prix de Paris).

They may lack that air of mystery, but they are a useful means of making a few predictions for the coming year (not that I could have predicted last year’s Prix du Jockey-Club success of Wootton Bassett’s son Almanzor, or the Grand Prix victory of the Air Chief Marshal colt Mont Ormel).

Altogether, there are just over 500 individual horses entered for the two Poulains races, the Jockey-Club, the Prix de Diane and the Grand Prix (which I have included on the basis that its distance makes it a closer equivalent to the Derby than the Jockey-Club, with the longer race also helping the stallions whose progeny require a stiffer test of stamina).

Inevitably there is some correlation between the stallions’ fees and the size of their representation in the Classics. It will therefore surprise no-one that the incomparable Galileo leads the way. In fact, he is responsible for little short of 10% of the nominees for the five Group 1s, with a total of 48 sons and daughters, from a 2014 crop of 162 foals. 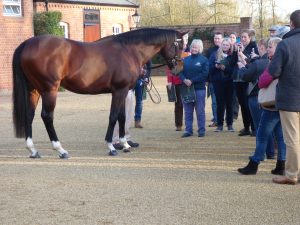 Frankel has 30 entries for the French Classics

Thanks to The Gurkha, Galileo has now been responsible for winners of all five Group 1 races under review. He also cropped up as the broodmare sire of last year’s Poule d’Essai des Poulains and Prix de Diane winner La Cressonniere. Galileo also leads the way among the broodmare sires of the Classic entrants, with a total of 19.

It is Frankel, one of Galileo’s stallion sons, who has the second-highest total of entries, with a whopping 30 individuals from a first crop of 111. The established Group winners Fair Eva, Frankuus, Queen Kindly and Toulifaut are supported by an intriguing collection of lightly-raced winners, such as Cracksman, Eminent, Icespire, Mirage Dancer, Monarch’s Glen, Swiss Storm and Lady Frankel, a half-sister to the dual French Classic winner Lope de Vega, who was successful on her debut at Saint-Cloud on March 19.

It could also pay to take note of some of the youngsters which, at March 5, were still unraced. William Haggas’ Elyaasaat, a son of the Breeders’ Cup Filly & Mare Turf winner Lahudood, is entered in all three colts’ contests. Andre Fabre, trainer of Lady Frankel, has Finche, a half-brother to the Group 1 winners Proviso and Byword.

Al Shaqab paid €800,000 for the filly Middle East as a two-year-old – she ran second on her debut at Chantilly on March 10 – and also has a homebred colt, Oshayger, out of Breeders’ Cup Filly & Mare Turf winner Zagora.

Another of Galileo’s Classic-winning sons, New Approach, has suffered a slight fall from favour, as illustrated by the fact that his 2017 fee is £30,000, compared to £80,000 in 2014 and 2015. Don’t forget, though, that his 2017 Classic contenders were conceived after he had run away with the first-crop sires’ title in 2012. He has nine nominees, including five trained by Fabre, so a revival may be on the cards.

The jury is also out on Nathaniel, another of Galileo’s top middle-distance sons. Although his results with his first two-year-olds were less than spectacular, there’s good reason for thinking that his progeny will improve substantially from two to three. He has six entries, including the promising British fillies Enable and Precious Ramotswe, each of whom made a winning debut on the all-weather.

Another young stallion who generally failed to live up to expectations with his first juveniles last year was Excelebration. He is standing the 2017 season at €10,000, having started out at €22,500, but he is another who possibly deserves a little patience. He has six nominees, including Shahjalal and Zeyzoun, a pair of unraced French colts bred and owned by the Aga Khan.

There’s also Brittanic, a David Simcock colt who has won his first two starts over Newcastle’s all-weather, and Richard Hannon’s Barney Roy, who is widely expected to develop into a smart performer. Barney Roy is one of the 19 entries with a dam by Galileo.

Another of last year’s first-crop sires, the very fast Australian horse Sepoy, has a quality team of six. Although it is far too early to be jumping to conclusions, it could be significant that five of the six are fillies.

It is no surprise to find that Fastnet Rock’s eight-strong team includes four out of Galileo mares. Two of them, Intricately and Rivet, have already made major contributions towards the flourishing Fastnet Rock-Galileo nick.

Needless to say, Fastnet Rock is by no means the only son of Danehill with a sizeable squad for the French Group 1s, with the veteran Dansili having 14, Redoute’s Choice 13 and Exceed And Excel eight.

In addition to Pharaonic, Juddmonte has John Gosden’s Shutter Speed, Dermot Weld’s Titus (plus the twice-raced Tempera), while Shadwell’s filly Talaayeb will be bidding to add to Dansili’s fine record with Rahy mares.

Dansili’s fee in 2013 was £80,000, whereas Redoute’s Choice was easily the highest-priced French-based stallion at €70,000. Redoute’s Choice’s fee at Haras de Bonneval reflected his outstanding achievements with the likes of Stratum, Snitzel, Miss Finland and Lankan Rupee in his native Australia.

Several of Redoute’s Choice’s French-trained contenders have shown plenty of promise, including Deep Inside, Spotify, Gold Luck, Golden Attitude, Wajnah and Normandie, but the one which will surely attract the most attention is the as-yet-unraced Zarmitan, a son of the exceptional Zarkava. Watch out too for John Gosden’s filly Astronomy’s Choice.

Redoute’s Choice shuttled to France for just two seasons but France still has two high-priced stallions in Le Havre, at €60,000, and Siyouni, at €45,000. Although both of these comparatively young stallions have already enjoyed success in the French Classics (Le Havre has two daughters who have completed the Pouliche-Diane double), they are rather short of representatives this time.

Their 2013 fees – and the stage of their respective careers – need to be factored in, as Le Havre was priced at only €5,000 in his fourth season and Siyouni was available for €7,000 in his third season. Siyouni still has a pair of likely sorts in Kestila and Straight Right, who have so far raced mainly in the provinces.

Another popular French stallion, Kendargent, has a 12-strong team led by the Listed winner Xaarino. Spare a thought, too, for the ex-English Myboycharlie, who has a team of six, even though his fee at Haras de Mezeray is only €4,500. Perhaps there will be another Euro Charline or Camprock among them.
When I reviewed the French Classic entries last year, Sea The Stars ranked second only to his half-brother Galileo, with 27 nominees.

Subsequent events were to justify these Classic aspirations, as the 27 featured such as Harzand, Across The Stars, Cloth Of Stars, Mekhtaal and Zelzal. However, they came from a crop of 124, whereas Sea The Stars’ 2017 contenders come from a crop of only 74. This helps explain why he has ‘only’ 12 entries in the five French Group 1s under review. Most are still untried but Big Challenge was a stylish winner of his only start for Saeed bin Suroor.

This colt shares the same broodmare sire, Maria’s Mon, as last year’s Jockey-Club winner Almanzor. It could also pay to make a note of the promising filly Listen In, a half-sister to those smart colts Dominant and Es Que Love.

Of course, Dubawi has a CV packed with outstanding achievements and he ranks third on the list behind Galileo and Frankel, with a total of 21 from a crop of 112 foals. He is well placed to add to his tally of Classic winners with the Prix Marcel Boussac winner Wuheida heading a team which also includes Coronet, D’bai and the once-raced winner Ettisaa.

Potential dark horses are the unraced Mabrook (out of Galileo’s smart daughter Mahbooba and therefore bred to the same cross as Night Of Thunder and Dartmouth); the high-priced Parabellum; and Plumatic, a son of the Group 1-winning Plumania.

There’s also good cause to be optimistic about Shamardal, as this winner of the Poulains and Jockey-Club is strongly represented with a team of 17.
Several have already enjoyed stakes success, including Alrahma, Blue Point, Heuristique and Really Special. Bearing in mind that Shamardal is still only 15 and his eldest daughters are only eight, there is plenty of credit attached to having six nominees out of his broodmare daughters.

Excelebration, with six nominees, is another who perhaps deserves a little patience

Shamardal’s son Lope de Vega, who emulated his sire’s French Classic double, had 13 entries last year but only six this year, from his third crop. However, the six include three British winners headed by the Group 3 winner South Seas.

Invincible Spirit is another with a 17-strong team, most of which hold engagements in either the Poule d’Essai des Poulains or Pouliches. Pick of the bunch at this stage has to be National Defense, winner of the Group 1 Prix Jean-Luc Lagardere. Then there’s Fabre’s Inns Of Court, a once-raced winner on Polytrack who has the attraction of also representing the powerful Invincible Spirit-Mr Prospector cross. Like the Group 1-winning sprinter Signs Of Blessing, Inns Of Court is out of a Seeking The Gold mare.

The only American-based stallions with five or more representatives are War Front with 13, the late Street Cry with six and Medaglia d’Oro with five. Predictably, most of the War Fronts are in the care of Aidan O’Brien, who has a very strong hand. Brave Anna and Roly Poly both ranked among the top four fillies on the European two-year-old ratings and Lancaster Bomber ranked fourth among the colts on 117, with War Decree and Intelligence Cross also well ranked on 113 and 110 respectively.

Sir Michael Stoute’s Zainhom could be the pick of the Street Crys. Interestingly, Medaglia d’Oro’s team of five represents a reduction of seven from the previous year, which raises the question of whether Godolphin now consider his progeny more at home in the US.

Up Next
Fortune favours brave breeders