It’s not so long ago that Britain was viewed as the poor relation to Ireland and France when it came to National Hunt breeding.

There’s no doubt that the Cheltenham Festival is not the be-all and end-all of the jump racing season, even though many commentators and some participants now act as if that is the case. But it is of course a showcase meeting and, as such, its results are both important and informative.

In recent years, the mid-March action at Prestbury Park has given followers of British National Hunt breeding much to cheer about, especially when considering the relatively small pool of jumping broodmares in this country compared to our competitors. In 2015, Coneygree became the first Britsh-bred winner of the Cheltenham Gold Cup in 20 years, and lo and behold, 24 months later, along comes another one.

Congratulations to Bryan and Sandra Mayoh, who feature as the TBA’s Breeder of the Month in this issue, but that was decided even before Sizing John won the Gold Cup and was gained instead for his victory in February’s Irish Gold Cup. The co-breeders also celebrated a Listed mares’ hurdle victory for Lifeboat Mona at Sandown in January and it’s a safe bet that another Breeder of the Month title will be heading their way.

Following a Grade 1 treble for Britain’s leading jump sire Kayf Tara at last year’s Festival, three of the four championship races went the way of British-breds this time. The loss of Midnight Legend last July has been much lamented and his posthumous honour now as the sire of a Gold Cup winner should be a spur to persuade some jumping owner-breeders to keep a well-bred male horse entire throughout his career over obstacles with a potential stud career in mind.

That said, the Cheltenham Festival provided a terrific advert for Derby winners, with Authorized, Sir Percy, High Chaparral and none other than Galileo each siring at least one winner. It is, however, a double-edged sword for those intent on trying to keep top-class middle-distance horses to the fore as Flat sires. 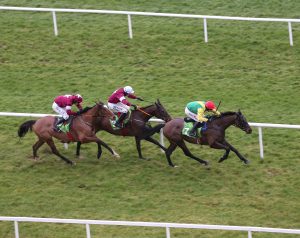 Of course Galileo’s popularity will never wane, but High Chaparral was never properly afforded the respect he deserved before his untimely death, Sir Percy is similarly overlooked and Authorized was transferred from Dalham Hall Stud to Darley’s French wing at Haras du Logis some years ago.

Authorized enjoyed double success at the meeting, first with dual Festival winner Tiger Roll in the JT McNamara National Hunt Challenge Cup, and later in the Stayers’ Hurdle, one of two Thursday Grade 1 winners for Graham and Andrea Wylie.

Before being bought to go jumping for the Wylies, Nichols Canyon ran for the partnership of Elaine ‘Legs’ Lawlor and former ROA President Rachel Hood. It was Hood’s former fellow ROA council member Sally Rowley-Williams who enjoyed another day in the spotlight on Wednesday courtesy of her admirable Queen Mother Champion Chase winner Special Tiara. The ten-year-old posted a much deserved success, both for him and for his trainer Henry de Bromhead after Special Tiara had finished third in the last two runnings of the race.

Bred by David Young, he was, of course, another big Festival winner for Kayf Tara, while the former British-based Mount Nelson enjoyed a major breakthrough in the National Hunt world as the sire of Albert Bartlett Novices’ Hurdle winner Penhill. The six-year-old’s victory surely proved to be a bittersweet moment for his breeder Newsells Park Stud, who were also responsible for Galileo’s swankily-bred Coral Cup winner Supasundae, as well as Supreme Novices’ Hurdle runner-up Melon, a son of Medicean.

It is no secret that Newsells Park’s Manager Julian Dollar was loathe to part with Mount Nelson, who left Royston for Ireland’s Boardsmill Stud at the end of the year. His Cheltenham success will have been a huge fillip for his new owners but, as previously alluded to, it can only make the situation harder for middle-distance Flat horses at stud.

However, a label doesn’t change a stallion’s genetics, so if you believe in a horse strongly enough, stick to your guns and try to breed yourself a Wicklow Brave, my personal favourite of all the Cheltenham runners with his bold effort in the Champion Hurdle after last year’s Irish St Leger victory.

Up Next
Benchmark for brilliance