After an early foal? The data behind the foaling dates

Those of you faced with the task of buying foals or yearlings on a regular basis will recognise the indeterminate number of mental calculations that need to be made when assessing any young prospect. For some, one of those could be foaling date, especially if its pedigree suggests that it ought to reach its full potential as a two-year-old rather than later on in its career. A speedily-bred youngster with an early foaling date would surely be ideal if you want to strike early and perhaps put yourself in a position to have a go at one of the big Royal Ascot two-year-old contests? Well, the data suggests that it’s not as straightforward as that.

In a study of over 150,000 foals born in Britain and Ireland over a period of ten years from 2008 to 2017 that sought to examine their effectiveness as two-year- olds, the results were certainly interesting. Perhaps the biggest take away is that you can be too early with a foal. Those foaled in January were at a distinct disadvantage compared to their February- and March-foaled counterparts. This will not surprise most of us, as we all know how a harsh winter month can curtail the development of a young foal – from preventing it getting valuable exercise to the lack of spring grass for its mother.

Although January-foaled two-year- olds only made up 11 per cent of the total sample, the findings were based on 16,803 individuals – certainly a robust sample size on which to base some worthwhile conclusions.

The first thing to note is the fact that fewer January foals than February and March foals even make it to the racecourse as two-year-olds – 32% compared to 46 per cent among February foals and 39 per cent of the March foals. That is quite a significant reduction given the perceived advantage they have over their younger rivals. Even when they do make it to the racecourse, they are less likely to win than February and March foals as our strike-rates of 31.5 per cent, 34.3 per cent and 33.2 per cent suggest. True, these differences are less significant, but when stacked up against the number of foals they become very stark indeed. The two-year-old winner-to-foal percentage for January foals stands at just 10 per cent, compared to nearly 16 per cent for those born in February and the 13 per cent in March. It’s an identical story for percentage juvenile stakes horses from foals – 3.4 per cent among those born in January and counter intuitively very nearly double that rate at 6.2 per cent among February foals. March-foaled two-year-olds, with their 4.9 per cent stakes horses from foals are also comfortably clear. In fact, April foals with 3.2 per cent, are just about as successful as January’s. 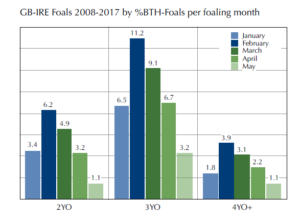 So, to summarise, it seems getting your mare pregnant on the earliest possible cover is demonstrably not the best way to go. It’s also patently clear that later foals are also compromised to one degree or another by their lack of maturity when it comes to two-year-old racing.

But what are their prospects of catching up through their three-year-old season? Well the short answer is that they do not recover the lost ground, certainly not to the degree we might expect. January foals still cannot match the rates of success of those born in the following two months.

Your probability of getting a three- year-old winner from a January foal stands at 46.2 per cent, up from the 31.9 per cent at two, but again well below the 61.1 per cent of February foals and the 52.9 per cent of those with a birthdate in March. Moreover, it’s not just January foals that cannot make up lost ground, it’s also those foaled in April and May, and they do not have the excuse of having had to deal with a harsh winter in their early life. Their strike rates of 18.7 per cent and 9.2 per cent are rather disappointing given the extra time they have had to mature. These trends are also manifest in the black-type scores of the various groups, the five monthly totals panning out at 6.5 per cent, 11.2 per cent, 9.1 per cent, 6.7 per cent and 3.2 per cent. And things don’t get any better when you examine the record of the various groups as older horses, the winner-to runner andsStakes horse-to- runner rates following a very similar downward spiral after February.

So why, after three years on the racecourse, should there be any discernable difference in the performance of various racehorses based solely on the month they were born? I must admit I have one extra theory that I’m sure plays a significant part in the phenomenon. During many hours looking at broodmare reproductive patterns, I have noticed that the progeny of mares, particularly younger mares, with no breaks in production, tend to have better outcomes on the racecourse. I can see that very same pattern in the data I have chosen for this study. Racehorses with both a year older and a year younger sibling are over 60 per cent more likely to be a stakes horse than a runner whose dam was barren both the year before and the year after it was born.

In fact any break in production seems to have an adverse effect on the foals either side of that break.

Now there are many reasons why this might be, ranging from the benefits of having a more equitable temperament of pregnant mares nursing a foal at foot compared to less patient barren mares, right through to the possibility of a change in the constituents of a mare’s milk once she becomes pregnant.

Clearly, this is an area that requires further study, but whatever the reason, there is no denying that the existence of siblings the year before and the year after has a huge beneficial effect on the athletic ability of a racehorse.

Assuming then that this is the case, ask yourself this question: what months of the year is this scenario most likely to play out? Common sense tells us that if your foal is late, there is less likelihood of the mare getting pregnant again. And our data bears this out, with only 58 per cent of mares in our study producing a May foal going on to produce a foal the following year. Compare this to the 68 per cent of mares producing February foals that then have a foal a year later.

Could it be that when we talk about the effect of foaling dates on performance, we are really talking about something quite different. 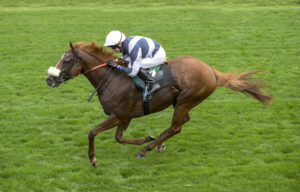 Up Next
Years of international cultivation continuing to bear fruit