Young stallions off the mark

There have been fewer than ten juvenile races in Britain and Ireland so far in 2011 but four first-season stallions are already jostling for position at the top of the table with a winner apiece.

Coolmore’s Dylan Thomas was first off the mark with his very first runner, Snowflake Dancer, trained by Jim Bolger for June Judd. Bred by Barronstown Stud, she is a daughter of the Sadler’s Wells mare Snowy Day in LA.

Next to score was Cheveley Park Sud’s Dutch Art, also with his first runner, Miss Work Of Art, out of Lacework, by Pivotal. The robust chestnut filly was bred and sold as a yearling by Newsells Park Stud and thus gained a double bonus on winning, with £10,000 from the Racing Post Yearling Bonus Scheme, and another £10,000 from Newsells’ own sales initiative.

It never takes long for Welsh-based trainer David Evans to have a two-year-old winner and this season is no exception. On Thursday, Jack Who’s He, a son of Red Clubs, who is not currently on active stud duty, won at Leicester. The Irish-bred colt is a graduate of Knocklong Stud and now races in the colours of Barry McCabe.

Red Clubs spent most of his racing career with a rear view of Amadeus Wolf, having finished runner-up to him in the Gimcrack, the Middle Park and the Duke Of York Stakes. He had the edge in their respective breeding careers for only 24 hours as Amadeus Wolf fired in his first winner at Musselburgh on Friday.

Hamza, trained like his sire by Kevin Ryan, looked every bit the professional despite being three weeks shy of his second birthday. He was bred by Lady O’Reilly’s Castlemartin Stud and Skymarc Farm and is out of Lady Shanghai, a half-sister to Dandyman, another high-class sprinter from the sole crop of Amadeus Wolf’s sire Mozart. Amadeus Wold stands at the Irish National Stud. 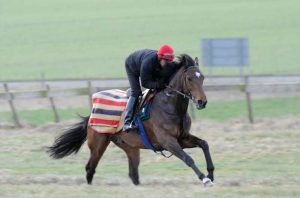 Up Next
Does a low key start matter?