A pair of youngsters by Mohaather and Bated Breath jointly topped the first day of the Tattersalls December Foal Sale in Newmarket on Wednesday when sold for 80,000gns apiece.

On what is a traditionally low-key session, their sales led the way on a day that featured the sale of 189 lots for a total of 3,128,300gns. The median showed a marked improvement from the corresponding day last year, leaping by 30 per cent to 13,000gns while the average increased by eight per cent to 16,552gns. However, it was clear that a number of vendors failed to clear their costs as illustrated by a clearance rate of 70 per cent – further underlining the fact that the market takes no prisoners on those lots deemed uncommercial.

Tom Goff and Rupert Gregson-Williams of Wardley Bloodstock came out on top for the co-topping Bated Breath filly, bred and sold by Yvonne Jacques’ Carisbrooke Stud. The breeder bought her winning dam Naqaawa through Brian Grassick Bloodstock as a three-year-old in training and campaigned her to win at Chelmsford City and run fourth in the Listed John Musker Stakes. Just as importantly, however, she is well-related as a Shamardal half-sister to the Listed winner Shaqira and Listed-placed Adhwaa, in turn the dam of this season’s Strensall Stakes winner Alflaila.

“She’s a beautiful filly from a very good farm,” said Tom Goff of Blandford Bloodstock. “She has a very good back pedigree but I thought that she just had loads of class and quality – a good body, beautiful head and very good movement.

“She could come back to resale next year or race on – we’ll see how she progresses through the year.”

The filly was bought on behalf of composer Rupert Gregson-Williams, whose works include the scores for The Crown and Hotel Rwanda, for which he received the European Film composer award. 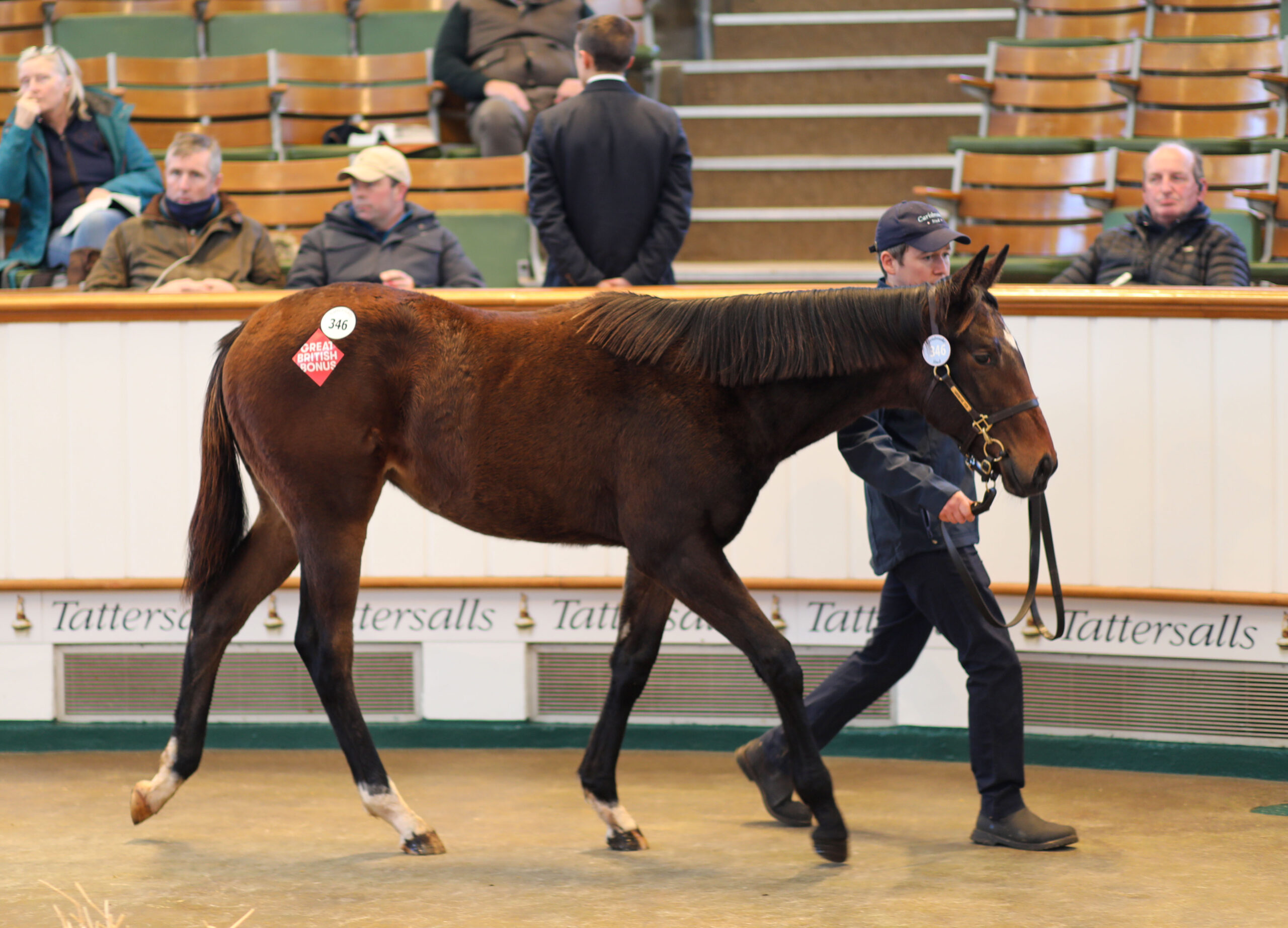 Shadwell’s Mohaather was among a host of first-crop sires to catch the imagination yesterday thanks to a colt out of Lady Freyja who sold out of the Brook Stud draft for 80,000gns to Joe Foley of Ballyhane Stud.

Foley had to outbid Luke Barry of Manister House Stud for the colt, whose multiple-winning dam is a Mayson half-sister to the Listed winner Party Boss and top hurdler Countrywide Flame.

“He looks a real Showcasing type and he reminded me a bit of Soldier’s Call,” said Foley. “He’s a lovely colt from a good hotel. I suspect we’ll keep him to race – he looks a real weapon.

“The mother was a good race filly, she was rated 90 so was useful. We actually bought a Ribchester filly from the same family here in Book 3.”

He added: “I underbid Mohaather as a yearling so am very keen to buy one – I’m a big fan. He was a really high-class racehorse. His acceleration in the Sussex Stakes was a joy to behold.”

On a day when six foals by first-crop sires filled nine of the top ten spots, a son of Whitsbury Manor Stud’s Sergei Prokofiev also hit the right note by selling for 72,000gns to Flash Conroy’s Glenvale Stud.

Sold by James Read’s Selwood Bloodstock, who co-bred the colt with Seascape Bloodstock, the colt is a half-brother to winning two-year-old Dajarus and from the family of Canford Cliffs.

“The sire seems to be getting gorgeous looking horses from what we have seen,” said Charles Shanahan, who signed the ticket. “He was obviously in training at Ballydoyle and it was thought he had an awful lot of potential. From his stock that we have seen, we thought it would be great to get one looking like the one that we have bought.

“This colt is a great mover, has loads of scope, loads of strength, everything you look for in a foal that you want to sell on as a yearling. He was definitely the one we wanted to buy today.”

Darley’s Earthlight also enjoyed a good result thanks to the sale of a colt bred by Alex Frost’s Ladyswood Stud out of the Group 3-placed Invincible Spirit mare Some Spirit for 65,000gns.

Yeomanstown Stud outbid Luke Barry for the colt, whose dam was purchased by Ladyswood Stud for €50,000 through Blandford Bloodstock at last year’s Arqana December Sale. His sale marked the highlight of a busy day for Barton Stud, which wound up as the session’s leading vendor thanks to the sale of 13 foals for a total of 251,500gns.

“He was a lovely colt bred by Alex Frost’s Ladyswood Stud,” said the stud’s Tom Blain. “It’s a lovely farm and they’re great people – we love selling for them.

“We had the colt for prep and he was very straightforward and professional. Then he came here and performed very well.

“It was a good price and I hope he does very well for Yeomanstown.”

He added: “I like the Earthlights. I saw plenty in Ireland and I’ve seen plenty here, and I think he’s getting good stock.”

Among the other first-crop sires to find favour on Wednesday, Newsells Park Stud’s St James’s Palace Stakes winner Without Parole was represented by a colt who was knocked down to Julie Wood’s Woodstock for 46,000gns.

“We had some success this year with [Newbury novice winner] Rich by Cracksman, who is obviously a son of Frankel [like Without Parole],” said Woods of the colt, bred and sold by Natton House Thoroughbreds. “So this year I thought I’d get in on the Frankel line again and his first-season sire son Without Parole.

“This is a nice foal, he looks quite compact at the moment, has a touch of class and is a good walker. It is a nice page and he was popular, but I thought he was nice enough to be one to go for.”

The foal sale continues tomorrow from 10am. 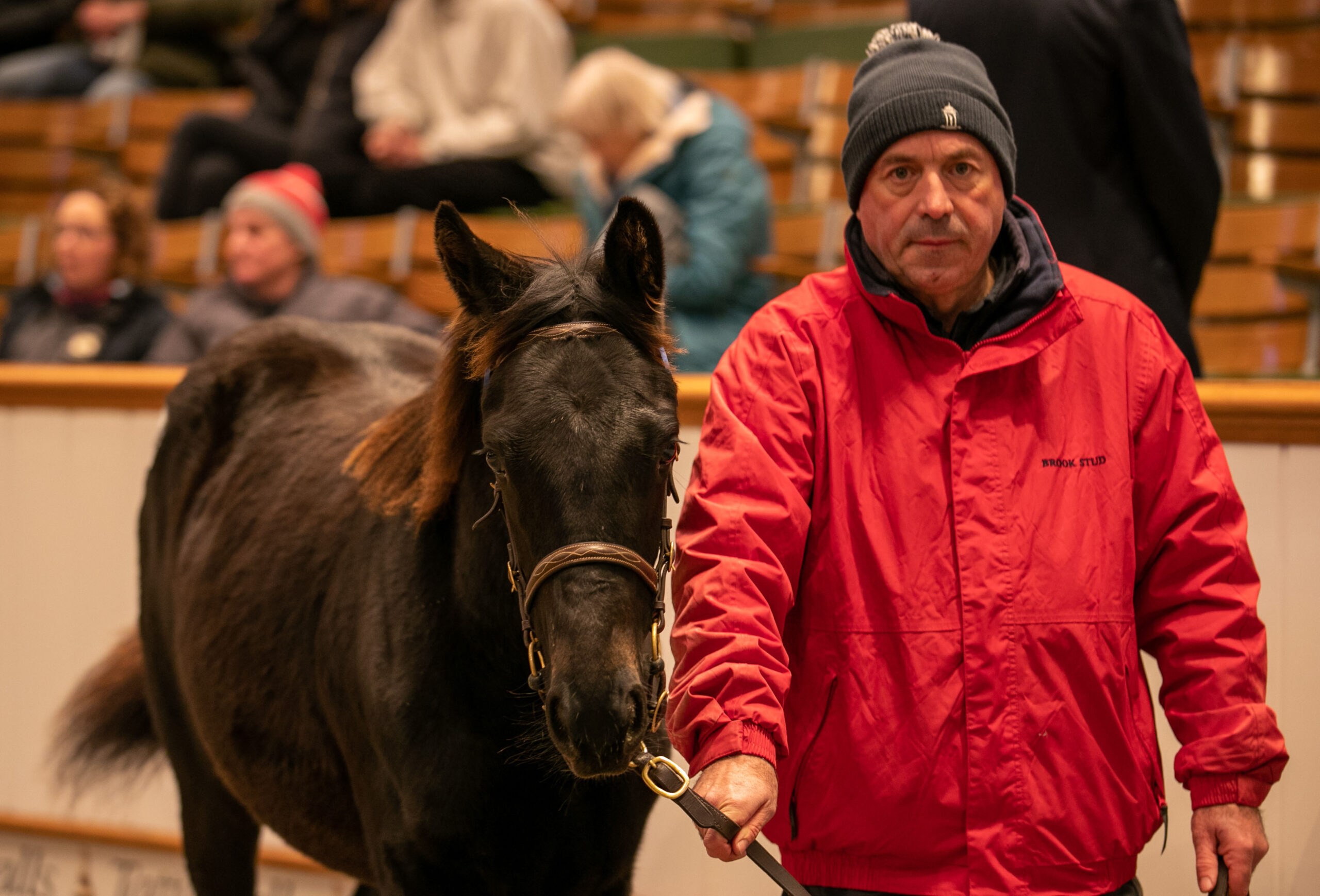 This Mohaather colt provided a good result for his young sire. Photo – Tattersalls 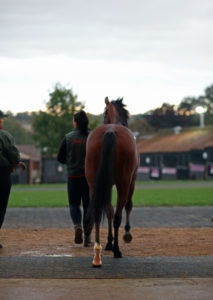