Japanese investment was a key element to the recent winter Kentucky breeding stock sales, and unsurprisingly those buyers were again active during the opener to the Tattersalls December Mares Sale in Newmarket on Monday, notably Katsumi Yoshida’s Northern Farm, which paid a session-topping 450,000gns for the well-related Crimson Rock. 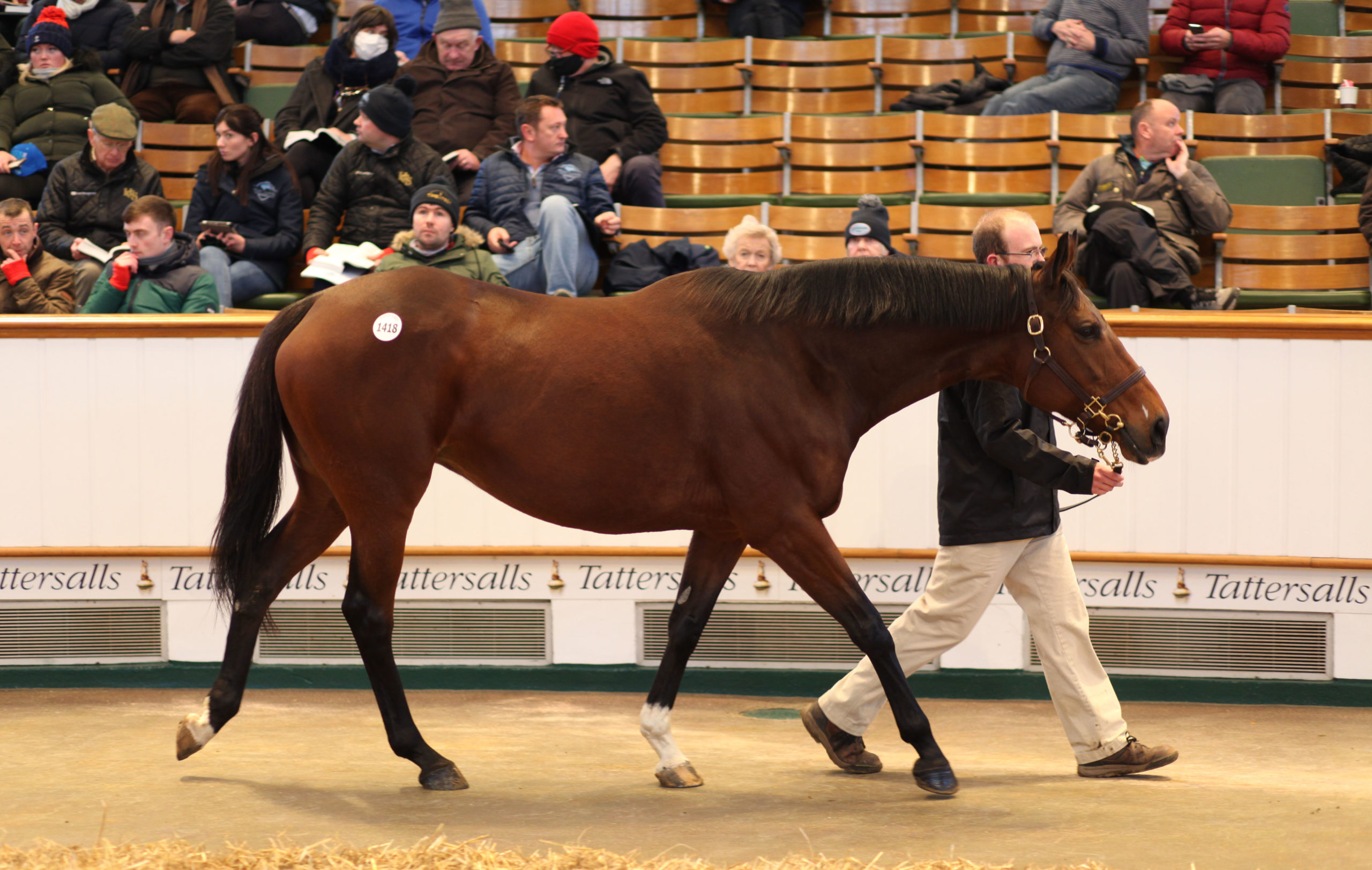 As a half-sister to champion Peeping Fawn and member of the exceptional Best In Show family, Crimson Rock holds vast international appeal, and as such, it was interesting to see Greg Goodman of the Kentucky-based Mt. Brilliant Farm and agent James Wigan make bold plays for the mare. However, neither could match the firepower of Shingo Hashimoto, bidding on behalf of Northern Farm.

“It’s one of the best female lines in the world,” said Hashimoto. “She’s very attractive and Fastnet Rock has done well in Japan so we thought she would be a good fit. It’s too early to say whether she will ship straight back to Japan. The family has done well with Deep Impact [sire of Peeping Fawn’s Group 1-placed daughter September] so she could suit one of his sons.”

The Yoshida’s Shadai Stallion Station is home to no fewer than six sons of Deep Impact including young Group 1 sire Kizuna, who is perhaps best known in Europe as the sire of this season’s Prix Foy winner Deep Bond, and new recruit Contrail, who capped his glittering career on Sunday with a brilliant victory in the Japan Cup.

Crimson Rock was bred by the Coolmore-affiliated Barnett Enterprises out of the Group 1-placed Maryinsky, dam of the aforementioned Peeping Fawn in addition to Group 1 winner Thewayyouare. Her second dam, 1982 Kentucky Oaks heroine Blush With Pride, foaled Kentucky Broodmare of the Year Better Than Honour, in turn dam of the Belmont Stakes winners Rags To Riches and Jazil in addition to Grade 2 winner Casino Drive, himself a former Shadai stallion. 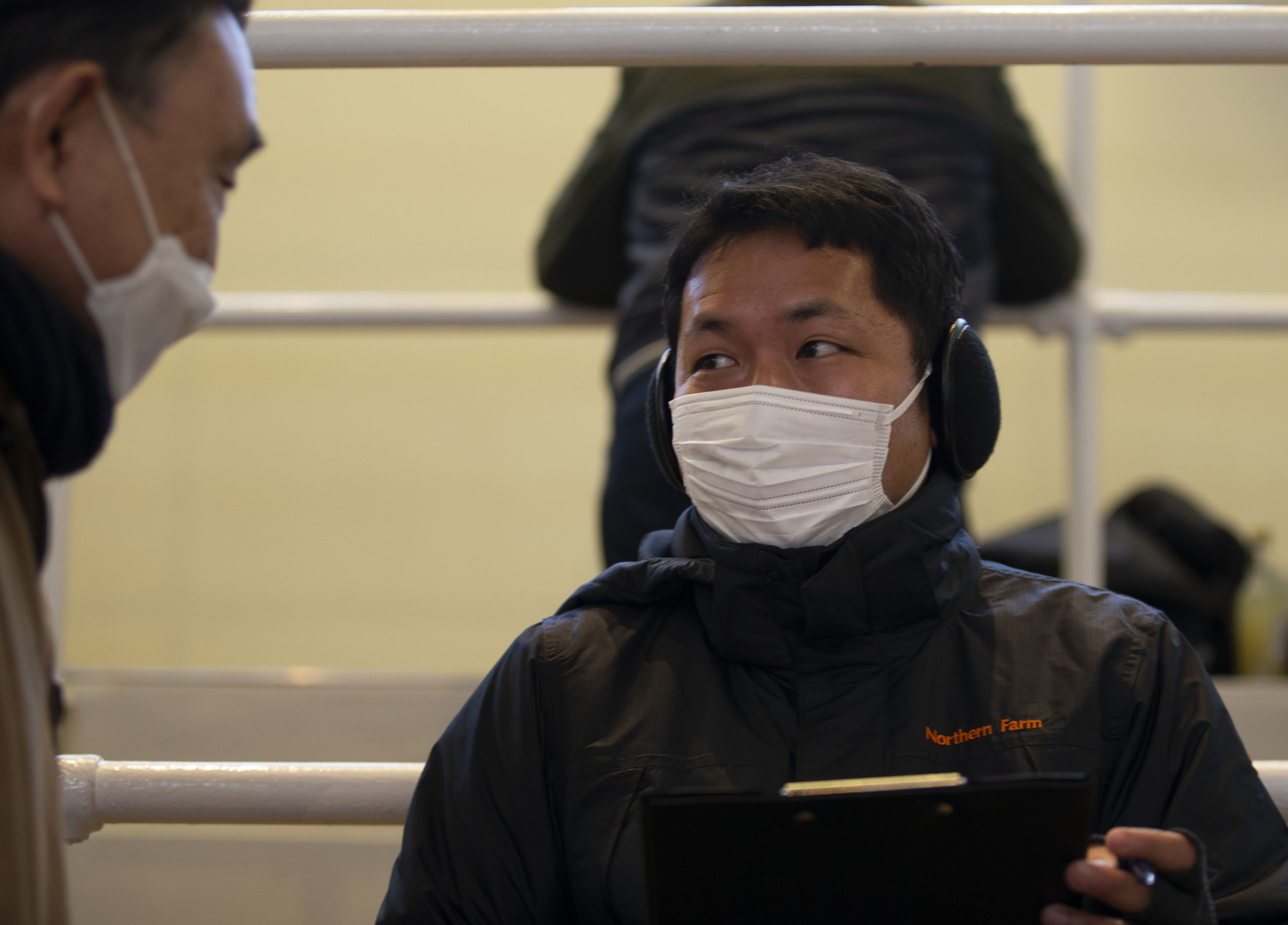 Crimson Rock originally commanded $1 million as a yearling at the 2015 Keeneland September Sale from Spendthrift Farm but wound up racing for Sheikh Mohammed Bin Khalida Al Thani with Ralph Beckett. She won first time out in a back end two-year-old Newbury maiden but wasn’t seen for another year and failed to shine in two subsequent outings.

The Al Shahania Stud partial dispersal continues tomorrow when the Group 1 winners Flotilla and Blond Me are set to go through the ring.

The eagerly anticipated draft of fillies from Juddmonte Farms are set to take their turn in the ring late on Tuesday in a departure from the operation’s usual Wednesday evening slot. However, there was a taste of the interest to come on Monday in the older Juddmonte mares, which were led by the sale of Midday’s half-sister Sun Tide to Charlie Vigors.

Signing as Notting Hill Bloodstock, Vigors had to go to 400,000gns to outbid Marc-Antoine Berghraght and Hesmond Stud’s Nurlan Bizakov, standing with Roger Varian on the back stairs, for the four-year-old Siyouni mare, who was sold in foal to 2,000 Guineas hero Kameko.

“She’s for a new English client,” said Vigors. “This is their first mare and the plan is to build a boutique broodmare band. It’s a wonderful family to buy into and she’s carrying a nice commercial cover, which gives us plenty of options. I’m sure they might race the odd filly but they would sell as well – plans are fluid.

“She’s an athletic, neat, attractive mare and that gives us plenty of options.”

Sun Tide hails from Juddmonte royalty as a half-sister to champion Midday, whose six Group 1 victories included three renewals of the Nassau Stakes at Goodwood, and the Group 3 winners Sun Maiden and Hot Snap. Midday has already made her mark at stud as the dam of two stakes winners in Midterm and Mori.

Second dam Modena was also something of a blue hen for Juddmonte as the dam of 11 winners including Oaks heroine Reams Of Verse, Group 2 winner Manifest, Group 3 winner Modernise and the Listed scorers High Walden and Novellara. Another foal, Elmaamul, won the Eclipse Stakes for Sheikh Hamdan. 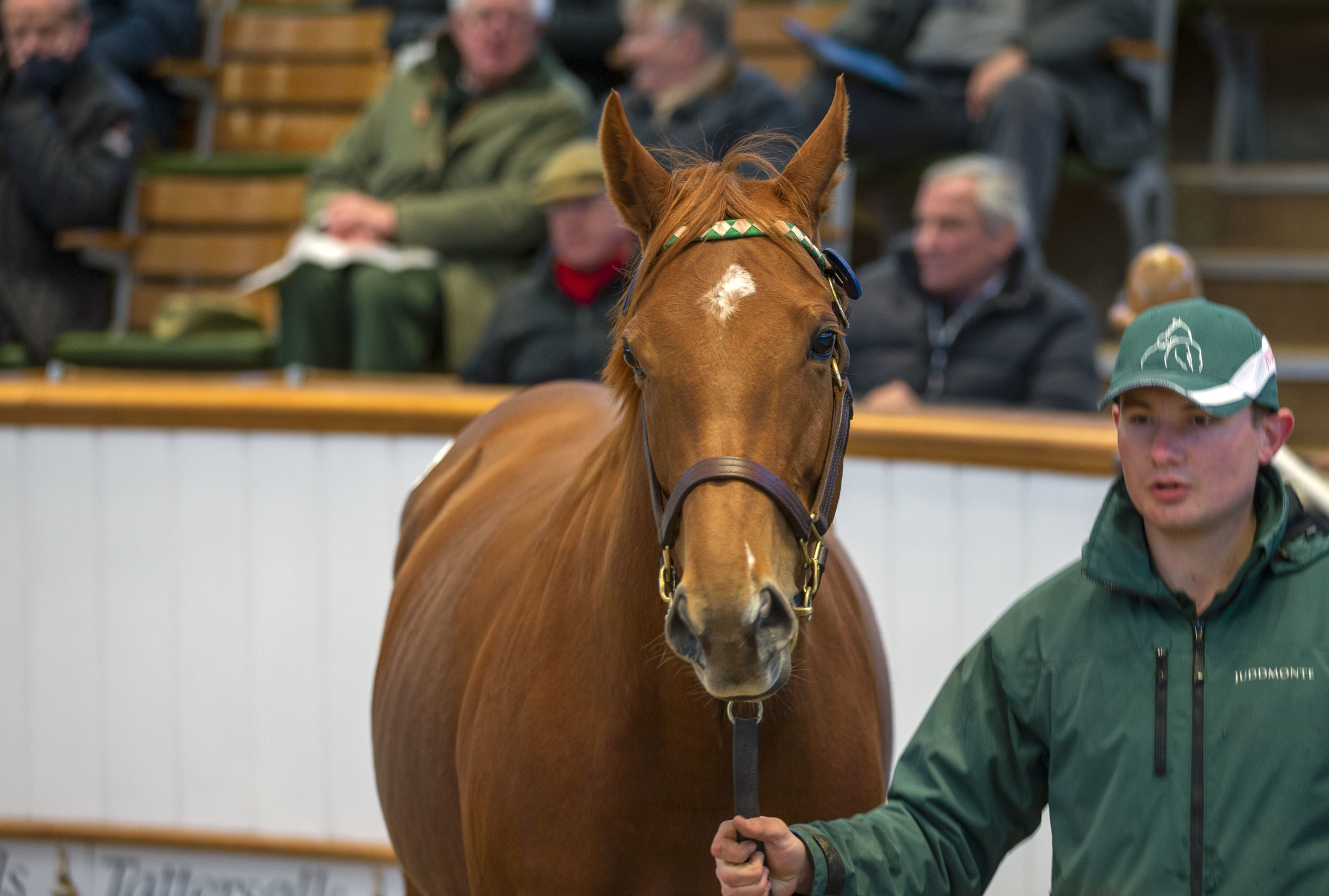 Sun Tide: half-sister to Midday was purchased for a British-based client. Photo – Tattersalls

Sun Tide was preceded into the ring by a similarly regally-bred Juddmonte offering in Tacitly, a Dubawi daughter of the Falmouth Stakes heroine Timepiece for whom Robert Nataf went to 375,000gns.

Not only does she hail from the immediate family of buzz sire Time Test but she is also in foal to Frankel; the resulting foal will be bred on the same Frankel – Dubawi cross as Derby hero Adayar.

Nataf was acting on behalf of a partnership between a client belonging to Nataf and Ecurie des Monceaux.

“The pedigree speaks for itself, and she is in-foal to the right stallion,” said Nataf. “It was not a brain scratcher!”

Monceaux’s Henri Bozo was on hand to observe the purchase and added: “And her price was within where we wanted to play. We have to discuss plans for her, but she could be one for Wootton Bassett.”

The Juddmonte draft also included the dual Group 3 Fairy Bridge Stakes winner Tested, a daughter of Selkirk from Juddmonte’s Roupala family for whom Amanda Skiffington signed at 290,000gns. Sold in foal to Bated Breath, Tested is the dam of this season’s Listed-placed two-year-old Deodar.

Also sold in foal to Bated Breath was the 2008 Prix Marcel Boussac heroine Proportional, who was knocked down to Blandford Bloodstock for 150,000gns.

The sole mare on offer in foal to Kingman was also understandably popular, selling for 330,000gns to Eddie O’Leary of Lynn Lodge Stud.

The mare in question, Model Guest, was a smart performer for George Margason, who saddled her to run third in the 2018 Group 3 Rockfel Stakes, and is a daughter of Showcasing, who is already showing promise as a broodmare sire as the damsire of three stakes performers.

“She’ll come back to Ireland and if she produces something like herself we’ll be ok,” said O’Leary, signing through Mags O’Toole. “She’s a beautiful mare, very light on her feet, and there are some very good crops coming through for Kingman.”

O’Toole also signed at 310,000gns for the classy Roger Varian-trained Lady Hayes. The daughter of Kodiac was bred by Gigginstown Stud and sold through Lynn Lodge as a yearling to Kerri Radcliffe on behalf of George Bolton, for whom she ran second in this year’s Lancashire Oaks. She is likely to continue racing, reported O’Toole.

Also set to stay in training is this year’s Nell Gwyn Stakes runner-up Statement, who was knocked down to Stephen Hillen for 300,000gns. 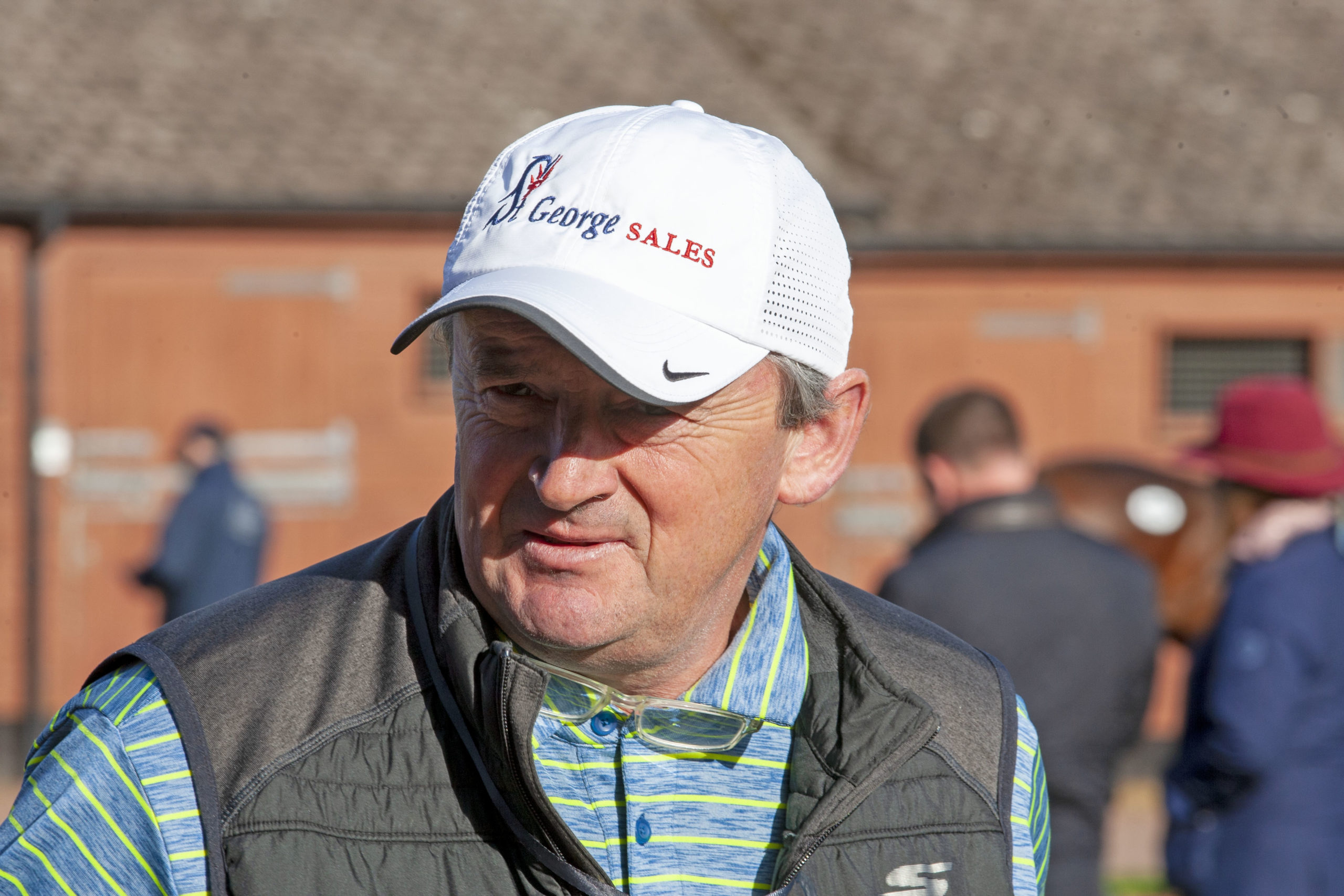 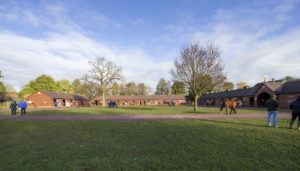