Yearling Bonus Scheme to be reviewed

The future of the Racing Post Yearling Bonus Scheme, which came into existence ahead of the yearling sales of 2009 in a bid to boost a depressed bloodstock market, will be decided this spring, with opinion within the industry divided as to whether it should continue for a fourth term.

Scheme Chairman John Osborne said: “We’ll have to make a decision in April or May. A lot of people want to see it continue and some people feel it’s an unnecessary expense. The sales companies were sceptical at the beginning but they have enjoyed working with the scheme and don’t want to see it end.”

“The fund itself has fallen over the last year simply because the number of horses going through sales has fallen,” said Osborne. “That in itself makes the scheme less effective as we are unable to offer the same number of bonuses.

“Gratifyingly, the sales in 2011 were not as dreadful as they have been. The scheme’s stated purpose in bridging the trough in the bloodstock sales market has been achieved, so perhaps there’s less of a need for it.

“Having said that, everyone knows the pressure we’re under with prize-money. It would be a pity, when UK prize-money has suffered so much through a reduction in the levy and sponsorship, if we were to turn round and say ‘you’re not having these bonuses either’.”

Richard Wayman, Chief Executive of the ROA, reiterated the appeal of the bonus scheme for racehorse owners, saying: “During a period when there has been a number of factors making racehorse ownership less attractive with, as a result, owner and horse numbers declining, the Racing Post Yearling Bonus Scheme has proved to be a very welcome initiative.

“The prize-money associated with maiden races has suffered particularly badly in recent years and the scheme has provided a much needed boost to races at that level. As with most initiatives, it is sensible to take stock from time-to-time but I am convinced that it is essential that the industry continues to find innovative ways to encourage investment in horses.”

Through her column in the January issue of Thoroughbred Owner & Breeder, TBA Chairman Kirsten Rausing welcomed a review of the scheme in light of reduced foal crops and improved sales results.

She said: “The upturn in market conditions has encouraged a review of the incentives which the breeding industry has crafted over recent years to stimulate demand. The Racing Post Yearling Bonus Scheme was one concept which found a great deal of support from the racing industry and breeders should be proud of the fact that they were prepared to fund this initiative to keep our share of the leisure pound or euro.

“With the darker days hopefully behind us, the organisers are wisely reviewing this scheme. I applaud their efforts and am confident that they will find the right way forward.”

Among those horses to have collected bonuses for their owners through the first two years of the scheme are Oaks winner Dancing Rain, who landed a Newbury maiden before her Classic victory, the Coventry and National Stakes winner Power, Richmond Stakes winner Harbour Watch, Nunthorpe heroine Margot Did and Cheveley Park Stakes winner Lightening Pearl. Outside Britain and Ireland, bonuses have been won in France, Italy, Germany, Spain, Greece, Hungary, Russia, Sweden, Denmark, Norway, Poland, Slovakia and the Czech Republic. 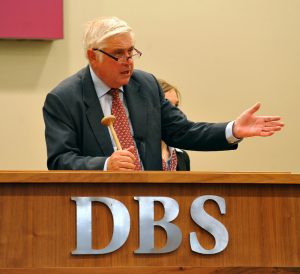 Up Next
Last hammer fall for DBS Vice Chairman