Former jump jockey turned dual-purpose trainer, David Dennis, is welcoming in the new year with brand new developments at Tyre Hill Stables situated at the foot of the Malvern Hills in Worcestershire.

Over a ten-year period Dennis rode over 240 winners including at Grade 1 level, yet turned his attention to training in September 2013 taking over the current premises from trainer Andy Hobbs.

In just his second season, he notched 32 winners under the National Hunt code and throughout 2015 took 13 races on the Flat from just 19 horses he unleashed.

One of his leading lights, the eight-year-old gelding Roman Flight has won eight races over hurdles and fences since his switch from David O’Meara.

The most recent of those successes came during Hennessy weekend when picking up a valuable Class 2 prize.

He sports the Favourites Racing Syndicate silks which are Tyre Hill’s biggest supporters, responsible for way over half of all inmates.

Located in 140 acres of farmland near the village of Hanley Swan, the current complex was split between a bottom and top yard, each separated a distance apart. Several other stables are also dotted around the vicinity.

The construction of 60 new stables in American style barns has helped to address the de-centralisation issue and focus the team’s day-to-day work.

“Putting three American barns which hold 20 each under one roof makes sense and makes life a lot easier,” said Dennis.

“We applied for planning permission three years ago so it’s been a long time coming. We got the build under way at the start of the year and now we are at completion.”

Another notable new development is a state-of-the-art eight horse walker, which includes a lunging ring in the centre. This replaces the pre-existing five-horse walker.

Very much a young trainer going places, Dennis hopes this revamp will help him and his staff achieve the goal of 40 winners next season.

I think we’ll be more efficient as a team

Dennis continued: “This gives us room for expansion in terms of numbers and I think we’ll be more efficient as a team.”

He added: “We’ll be able to house more horses together in a healthy environment, whereas the old stabling that we were using was a little bit dated and there were always some concerns.”

The horses were all moved into the new American style barns earlier this month and have settled in well. There is only some groundwork remaining before construction is completely finalised. 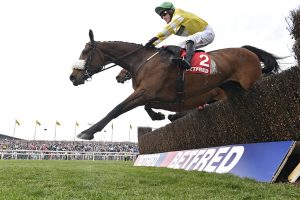 Up Next
Destrier in top nick for Welsh National