World at his feet

He is described by his trainer Mouse Morris as “a big, raw bugger” but Gigginstown House Stud’s Rule The World will doubtless be a warm order in the Cheltenham Festival ante-post markets after cantering to a 16-length win over Minsk in the Grade 2 Slaney Novice Hurdle at Naas on Sunday.

Last season’s Champion Bumper winner Champagne Fever was sent off 1-4 favourite but a disappointing run in third – 40 lengths adrift of the winner – was attributed to a respiratory tract infection following post-race investigations by trainer Willie Mullins.

Morris has also trained two of Rule The World’s half-brothers – Venalmar (Kayf Tara), who also won the Slaney Novice Hurdle in 2008 and followed up by finishing just a quarter of a length behind Fiveforthree in the Grade 1 Ballymore Properties Novices Hurdle at the Cheltenham Festival, and four-time winner Elysian Rock (King’s Theatre), wh0 was third in a Grade 2 novice chase.

Rule The World, a six-year-old son of Sulamani, is the tenth foal of the Persian Bold mare Elaine Tully, herself a decent dual-purpose performer who has produced eight winners under National Hunt rules, four of which have gained black type. Making up the quartet is her daughter One Gulp, who was a dual Listed hurdles winner and was placed at Grade 2 level. She is closely related to Rule The World being by Sulamani’s sire Hernando.

A Classic winner with six Group 1 victories to his name, Sulamani became a Classic sire with on the Flat his first crop when Mastery landed the St Leger for Godolphin for 2009. Having started his career at Dalham Hall Stud in Newmarket, he served stints in Brazil and France before being bought privately by Richard Venn on behalf of the Cashman family to stand at David and Teresa Futter’s Yorton Farm in Shropshire as a National Hunt sire.

He is already represented by Grade 1-winning hurdler Cash And Go and now Rule The World looks yet another talented contender to advertise the merits of his sire to jumps breeders in Britain and beyond. Also among his promising young jumpers is the Charlie Longsdon-trained Spirit Of Shankly, a dual wide-margin bumper winner who was third in a Listed novices’ hurdle at Kempton in October, while Oliver Sherwood trains a six-year-old half-sister to Riverside Theatre named Rock Me Gently.

From 25 runners this season, Sulamani has been represented by ten winners, a strike rate of 40%. 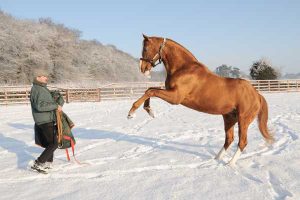 Up Next
Selkirk dies at 25