World at his feet

The Ladbrokes World Hurdle may have been viewed as a duel between Big Buck’s and Annie Power in some quarters but nobody told More Of That, who spoiled the party by refusing to buckle when outstaying the mare by a length and a half. At Fishers Cross was a further five lengths back in third, while Big Buck’s crossed the line in fifth place and was immediately retired by trainer Paul Nicholls.

For the second time this week, the second colours of JP McManus were borne to victory by Barry Geraghty, with retained jockey AP McCoy on the first string At Fishers Cross. McCoy had also chased the Geraghty-ridden Jezki home when guiding My Tent Or Yours to a second-place finish is Tuesday’s Champion Hurdle.

There was some consolation for the champion jump jockey, however, as he initiated a Thursday double for the Jonjo O’Neill stable when galvanising Taquin Du Seuil to glory in the opener, the JLT Novices’ Steeple Chase. More Of That became the third winner of the week for the trainer as O’Neill also saddled Holywell for a Grade 3 success over fences on Tuesday.

“Jumping the last, I thought he would keep galloping,” said O’Neill of six-year-old More Of That, who is now unbeaten in five starts. “I had a little doubt in my mind that Annie Power might not quite get home but she gave us a fair fright. It’s nice that there was no pressure on us today.

“It was AP’s decision. He believed in his horse and I believed in mine. Barry wasn’t too bad, was he! AP was adamant that he wanted to stay on At Fishers Cross which I’d have done because he was proven over the trip and they’d got him jumping much better.

“Barry got him into a lovely rhythm and the horse jumped brilliantly today. He won this race for me 10 years ago with Iris’s Gift so it’s nice to team up again.

More Of That and his full-brother Eastlake both won at Cheltenham on December 14 and Eastlake could yet bring about another notable family double as he is declared to run in Friday’s Johnny Henderson Grand Annual Chase.

Willie Mullins, who is sharing the top spot of the Cheltenham leader board with O’Neill and David Pipe, indicated that Annie Power could next be seen back on home turf at Punchestown.

“I think that she ran to her mark and we were beaten by a better horse,” he said. “We were in a good position at all stages and I don’t have any excuses. She jumped very well – I can’t say that she made a mistake, got penned in or anything like that. It was a good horse race.

“We will look at everything for her. We have been at every trip this year and we will see how she comes out of that and see what race to go for. She might go to Liverpool or I would say Punchestown at this stage. That would have been a hugely hard race and time-wise, Punchestown would be a bit better.”

Having landed the Arkle Trophy on Tuesday with last-gasp winner Western Warhorse, David Pipe and Tom Scudamore were flying high again on Thursday with a double courtesy of Dynaste and Ballynagour, both of whom were beaten favourites in the same races at last year’s Festival.

Outgunned last year by Benefficient, Dynaste turned the tables to take the Ryanair Chase by two and a quarter lengths from long-time leader Hidden Cyclone. Again sent off as favourite, Dynaste ran home strongly up the hill to the delight of the winning jockey.

“That’s definitely made up for last year!” said Scudamore. “I came here thinking he was a certainty 12 months ago but there’s no such thing at the Festival. He didn’t disgrace himself but I don’t think he did himself justice that day.

“It was a really good championship race today run at a decent pace. I was able to bide my time and he’s jumped really well. The only point where I thought they’d got away from me was at the third last where he made a little mistake.

“However, this race is on the New Course and that makes all the difference to this fellow. It’s just that bit stiffer which allowed him to get back into the race and I knew I’d win when he winged the second last.

“He’s just a very good horse. He gives you the confidence to just get on with it. I just have to point him in the right direction and hold on tight.

“I am delighted for the horse, for the owners and David – they have done such hard work. After the King George he wasn’t himself and that was the real him today. What a thrill. This week has been amazing. I’ve had some great rides and to win two Grade One races is something special.”

Ballynagour gave owner Allan Stennett another day to remember at Cheltenham with an impressive victory in the Byrne Group Plate. Stennett also owned Salut Flo, who won the same race in 2012 and was sadly lost recently to colic. 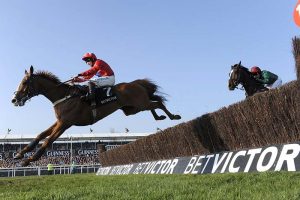 Up Next
Family affair as Sire De Grugy triumphs