Five years on from finishing down the field on his final outing in the Haydock Sprint Cup, Wootton Bassett – a Group 1 winner and unbeaten at two – has been a rapid achiever within the European stallion ranks, now in his fifth season at Haras d’Etreham in Normandy.

Originally a £46,000 yearling purchase at the DBS Premier Sale in August 2009, the son of Iffraaj had a sensational start to his racing career with trainer Richard Fahey.

He won all of his five races during his juvenile campaign, capped off in fine style when he made every yard of the running in the Group 1 Prix Jean-Luc Lagardere at Longchamp’s Arc meeting in 2010.

A busy first season apparently took its toll on Wootton Bassett, as he failed to fire as a three-year-old, running only four times, all at Group 1 level.

It seemed to Fahey and owners Frank Brady and The Comic Cases that the colt had fallen out of the love with the game. Therefore the decision was taken to sell him on after his final outing at Haydock.

“I told Richard [Fahey] to start looking for a buyer and we came up with a buyer. We negotiated and came up with a price and everybody was happy,” reflected Brady.

“Haras d’Etreham took quite a gamble buying him – and they paid quite a few quid.”

Despite entering stud on the back of disappointment on the track, Wootton Bassett has flourished since joining the team at Haras d’Etreham, managed by Nicolas de Chambure.

The de Chambure family has operated at their base, situated in the Bessin near Bayeux, since the 1940s, a breeding ground that has produced the likes of champions Urban Sea and King’s Best.

Even though Wootton Bassett’s first crop of two-year-olds excelled – which made him the champion first-season sire in France last year – his biggest success to date came when the Jean-Claude Rouget-trained Almanzor, his three-year-old son out of Darkova (Maria’s Mon), landed the Prix du Jockey Club at the start of June.

A somewhat surprise winner on the day, this victory comes early on in Wootton Bassett’s new career. Another of his exciting three-year-olds in training is Do Re Mi Fa Sol, who was only narrowly denied in the Group 2 Prix de Malleret earlier this month.

Paul Hanagan, who rode Wootton Bassett in all his races, still keeps an eye on his former mount. He gave him his first Group 1 win as a rider at a time when he was also crowned champion jockey for the first time, a period the 35-year-old reflects upon with pleasure.

Hanagan said: “He was a very good horse and a kind type as well as being just an absolute gent.

“It’s really nice to see what’s happening. It’s frightening when you see this stuff, you start to show your age when things like this happen.”

Wootton Bassett’s star could rise even higher this year. Almanzor will be targeted at a host of Group 1 races across Europe and is currently entered in next month’s Juddmonte International at York, which could add another high-level triumph to his and his sire’s record. 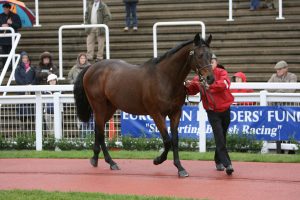 Up Next
The clock stops on legendary jumps sire