A pair of millionaire colts sparked life into the second day of Book 1 of the Tattersalls October Sale in Newmarket on Wednesday.

Various participants have remarked on the selective feel to trade over the past few days but the figures paint a positive picture, and indeed the presence of two million-guinea lots did much to boost a sale for which there had been no breakthrough seven-figure lot during the opening session the previous day.

The American-based Woodford Racing, a syndicate fronted by Bill Farish of Lane’s End Farm, swooped to purchase the session-topping lot, a son of Sea The Stars bred and sold by Watership Down Stud who cost 1,200,000gns through Charlie Gordon-Watson.

Woodford Racing was busy at the recent Keeneland September Sale, where they signed for $4,705,000 worth of stock led by $1.7 million and $1.6 million colts by Quality Road and City Of Light. This is their first purchase in Europe.

For Gordon-Watson, it was a sale that continued a successful association with the Darara family. The agent purchased the Top Ville mare, a Group 1-winning half-sister to Darshaan, as a foundation mare for Watership Down Stud for Ir470,000gns back in 1994. The mare went on to become a tremendous asset for Andrew and Madeleine Lloyd-Webber as the dam of dual Group 1 winner Rewilding and then Dar Re Mi, a wonderful filly who carried the stud’s colours to victory in the Yorkshire Oaks, Pretty Polly Stakes and Dubai Sheema Classic.

In turn, Dar Re Mi bred champion Too Darn Hot, the high-class middle-distance filly Lah Ti Dar and this colt’s dam So Mi Dar, who was trained – like the rest of the family – by John Gosden to win four races including the 2016 Musidora Stakes.

This colt is her second foal. 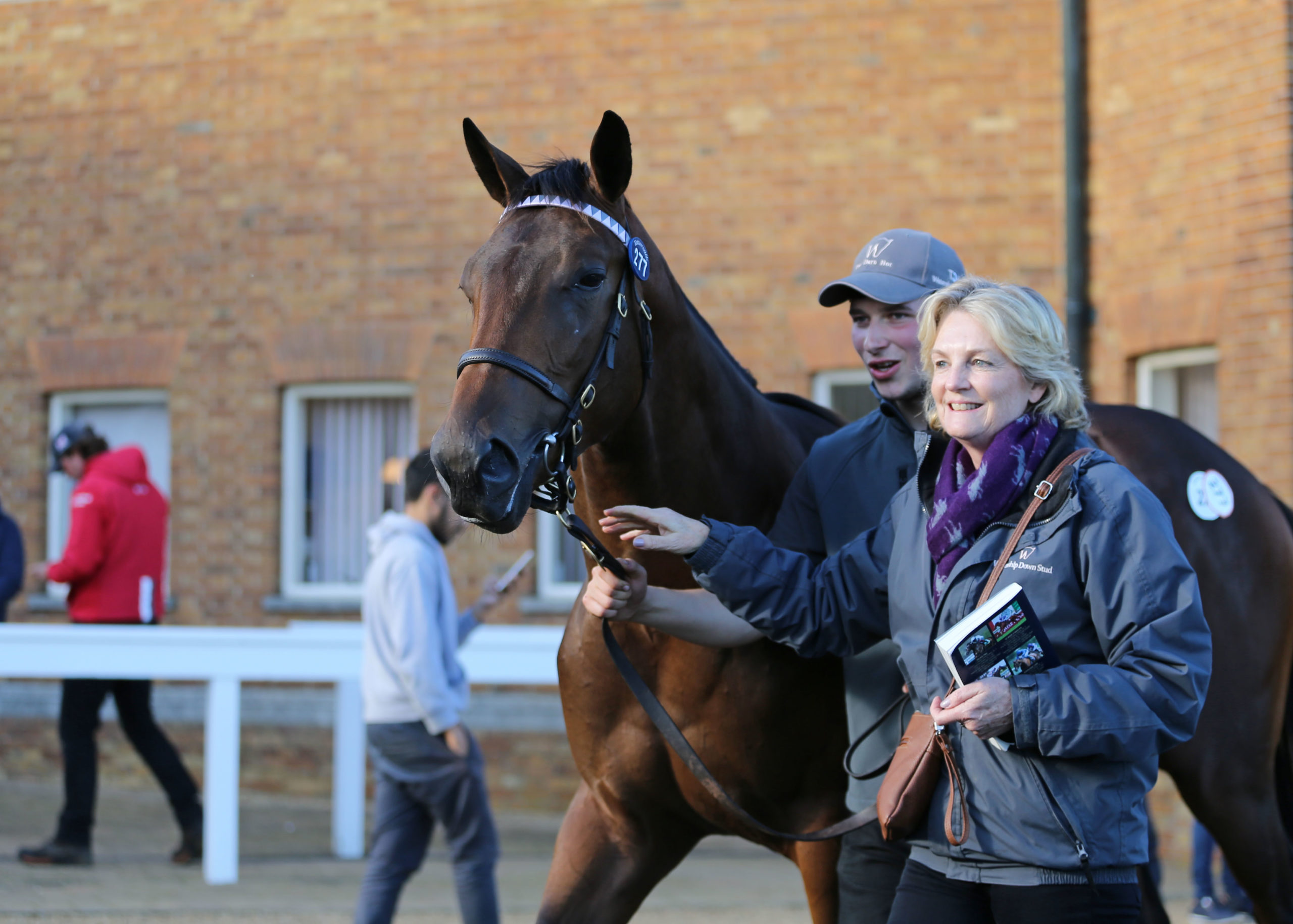 “And Andrew arrived just in time! He came into the ring just as he was at the 700,000gns mark so maybe he’s our lucky charm!”

Training plans are undecided but although Woodford Racing is an American-based outfit, the colt is likely to remain in Europe.

“Bill rang me about an hour and a half ago,” said Gordon-Watson. “I think he saw a bit of an opportunity with the way the market is and it was a plan that was put together very quickly. Obviously I know the family backwards having bought Darara, and then I bought the first foal out of Dar Re Mi, [the Group 3-placed] De Treville.

“For me, he was the best horse in the sale. He’s very typical of the family but a bit bigger – they can be on the small side and he’s a Sea The Stars.”

A good day for Sea The Stars also consisted of the sale of a half-sister to top two-year-old Cursory Glane for 680,000gns to One Agency. The filly was bred by Merry Fox Farm out of Time Control, herself the 1,200,000gns sales-topper at the 2006 renewal of this sale. 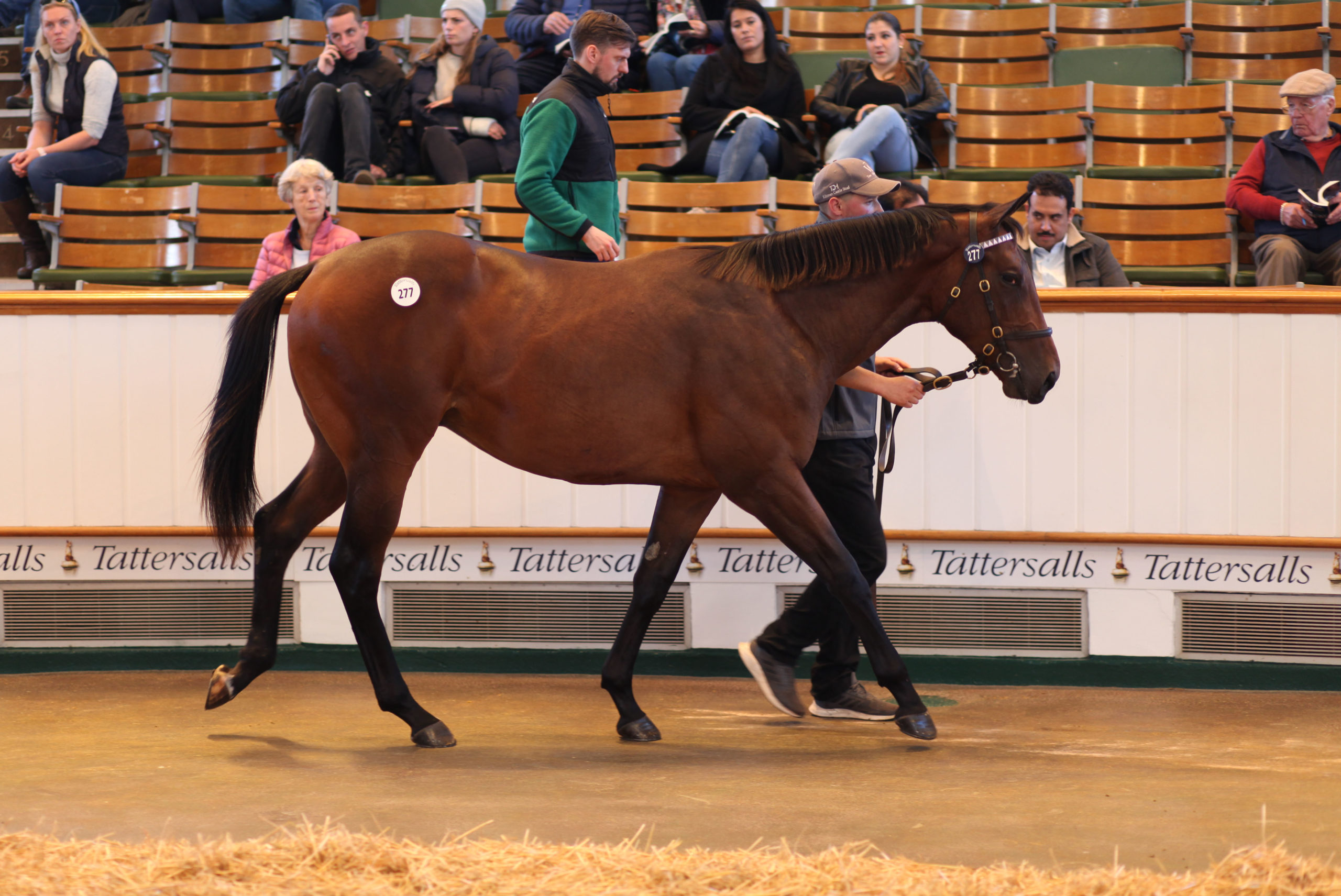 In a scene reminiscent of some of the great Tattersalls clashes of the past, MV Magnier and Sheikh Mohammed went head to head on two of the most desirable colts on offer.

On each occasion, both parties were situated outside the ring, their bids fired to the spotter as they stood facing each other in front of an attentive audience. And on each occasion, it was Magnier who came out on top, with a bid of 1,100,000gns sealing the sale of a Kingman colt out of Group 2 winner Turret Rocks and that of 925,000gns securing a Frankel relation to Grand Lodge.

The sale of the Kingman colt was a poignant one for vendor Corduff Stud, who bred him in partnership with the late John Corcoran.

“It’s a great result,” said the stud’s David Egan. “I didn’t think they [Coolmore] were on him but they showed up and bought him. John Corcoran had the mare, he raced her with Jim Bolger. She’s a big, beautiful, Fastnet mare, she was so honest on the track, and John envisioned what he wanted to do with her and this colt. John is no longer with us but he was very involved with the mating, so it’s great.”

The colt is the first foal out of Turret Rocks, who was saddled by Bolger to win five races including the May Hill, Blue Wind and Meld Stakes. She was also second in the 2015 Prix Marcel Boussac. 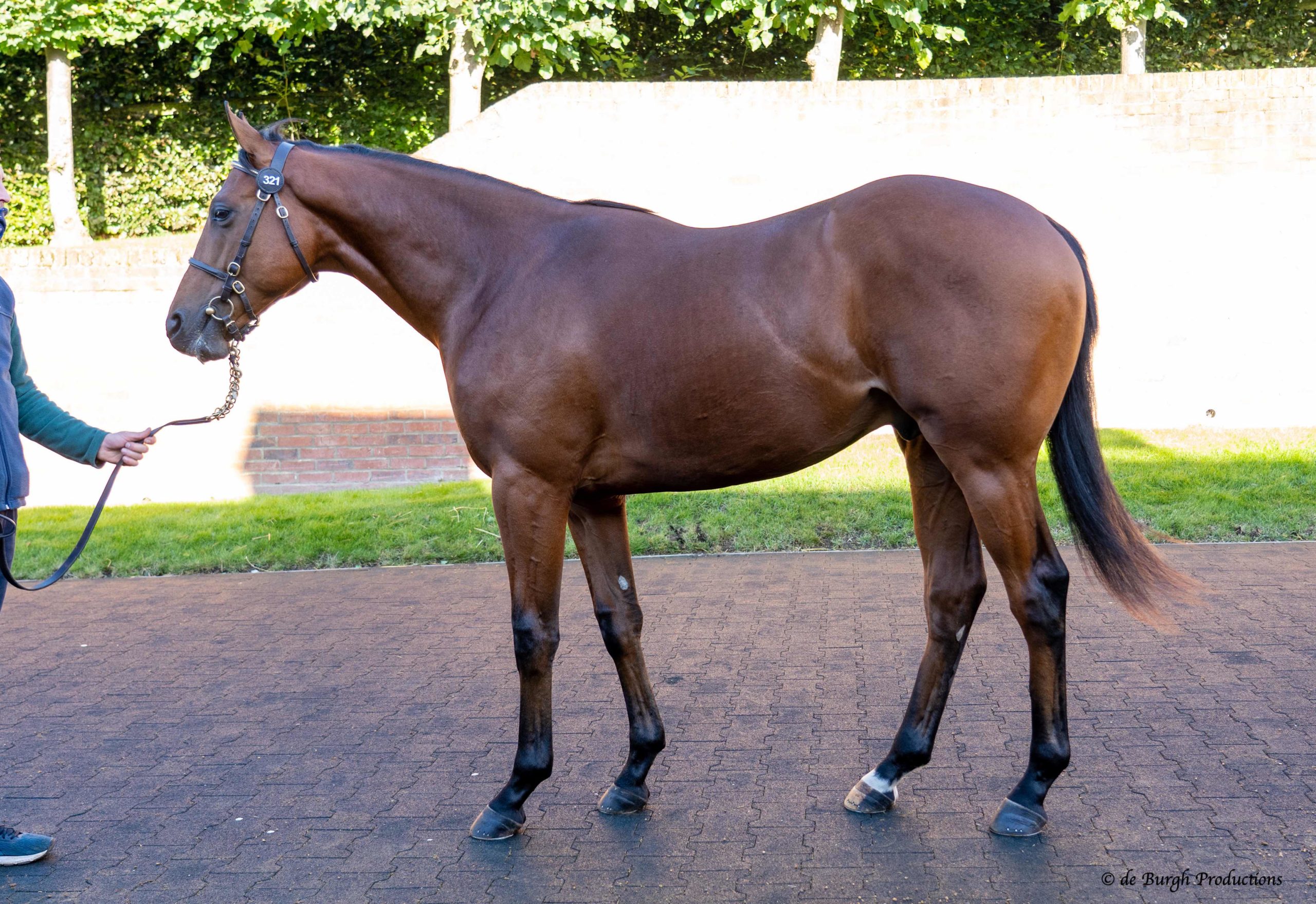 Meanwhile, the sale of the Frankel colt continued a remarkable commercial run for breeder Andrew Stone of St Alban’s Bloodstock following the 725,000gns sale of his Lope De Vega colt out of God Given the previous day.

“He’s a very nice horse and Frankel is obviously doing very well,” said Magnier. “We’ve been very lucky buying off Newsells Park Stud in the past. We wish Graham Smith-Bernal the best of luck in his new venture, may it be very successful for him.”

He added: “We’re seeing Galileo doing very well as a sire of sires – you have Frankel, Australia, New Approach, Teofilo, they’re all doing well so the future is bright. This is a great-moving colt.”

The colt is a half-brother to Grade 2 Glen Falls Stakes winner Mrs Sippy and out of Qushchi, a Listed-winning daughter of leading Australian sire Encosta De Lago bred when her sire stood his single season at Coolmore’s Irish base in 2009. Further back, this is the fine Lord Howard de Walden family of Grand Lodge, himself a successful Coolmore stallion of his time. 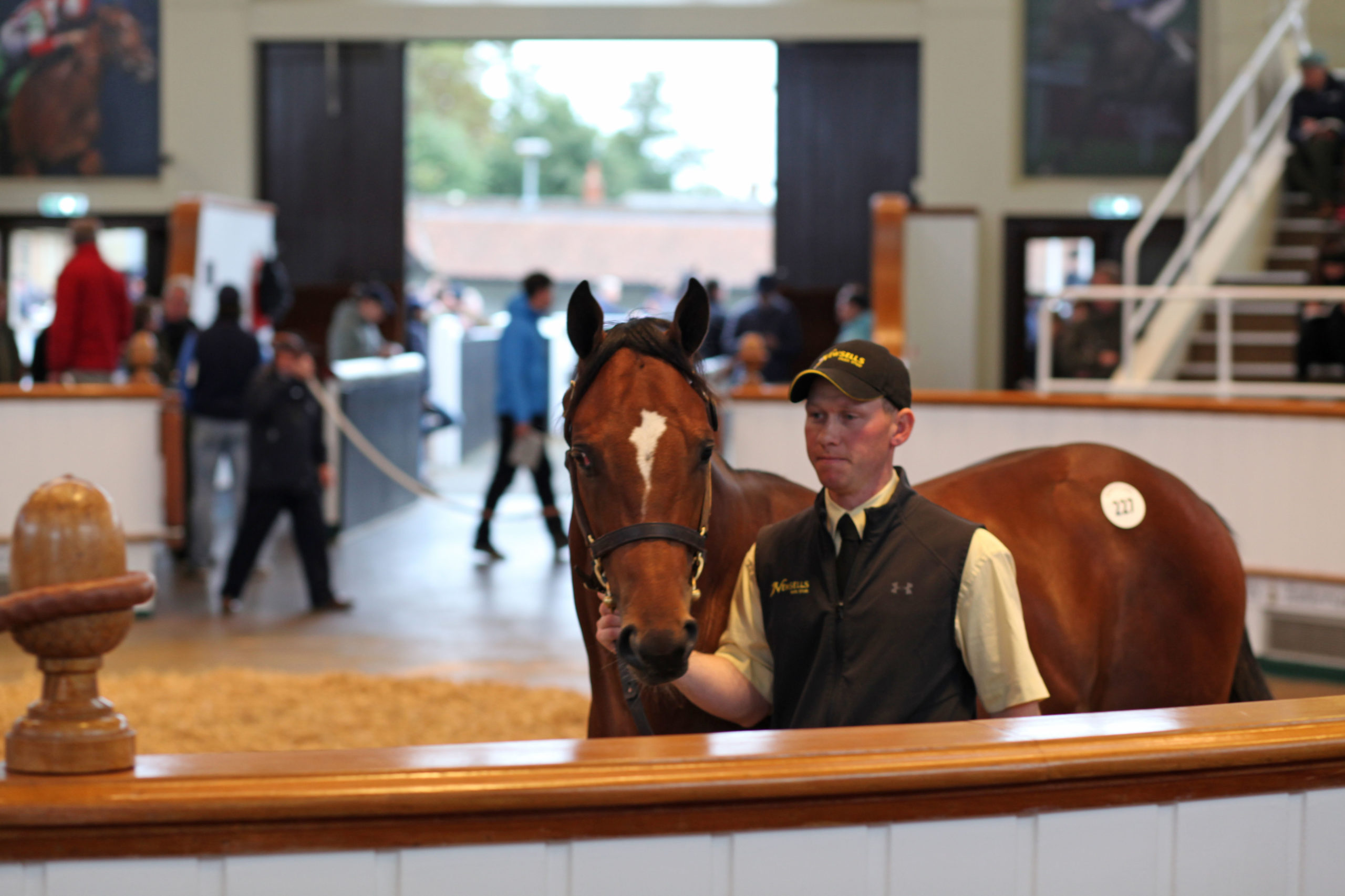 Unsurprisingly, Galileo himself wasn’t far from the action, notably as the sire of a sister to Group 3 winner Lancaster House who was sold by David and Diane Nagle’s Barronstown Stud for 800,000gns to Alex Elliott.

Elliott, standing with the Coolmore team, outbid Michael Donohoe of the BBA Ireland for the filly, who was bred by Barronstown out of the Grade 2 Royal Heroine Mile heroine Quiet Oasis.

“She’s for a new owner with Ralph Beckett,” said Elliott. “It’s a real privilege to be able to buy a filly like that, and very exciting. I remember Quiet Oasis from my time in California. She was a very good racemare for Paul Reddam and she’s already produced a good horse in Lancaster House.

“This filly is a real collector’s item. She’s hard to fault and it’s very exciting to be able to buy a filly of this potential.”

Previously dam of a Galileo filly, Drummer Girl, who sold for 2,100,000gns at this sale two years ago, Quiet Oasis is a sister to the Prix La Rochette winner Young Pretender and from the famous Lodge Park Stud family of New Approach and Park Express.

As anticipated, American investment has been a key element to this sale, with Klaravich Stables, Mike Ryan, Liz Crow, Ben McElroy and Bridlewood Stables among those to have make their presence felt during the first two days of trading.

On Wednesday, Craig Bernick of the Florida-based Glen Hill Farm joined the fray when paying 650,000gns for a beautifully-bred Kingman filly from Adrian O’Brien’s Hazelwood Bloodstock.

Bred by John Camilleri of Fairyway Thoroughbreds, the filly is the second foal out of Ring The Bell, a Galileo sister to the brilliant fillies Hydrangea and Hermosa in addition to Australian Group 1 winner The United States. Ring The Bell is also a half-sister to high-class sprinter Fire Lily and out of Group 2 winner Beauty is Truth, a member of the popular Kilfrush family of Glorious Sight and Zipping.

“We bought a Kingman filly yesterday that we thought was the second best filly here, and now we’ve bought this filly, who we thought was the best,” said Bernick. “It’s a great family, particularly for fillies, there are a lot of Group 1 winners down the page.

“We actually have a filly out of Fire Lily [Willamette Valley] with Jessica Harrington – she ran the other day and was a little disappointing but we still think a bit of her.

“This filly comes from a great farm and a great breeder – John Camilleri has bred a lot of good horses. She’s also obviously by a very good stallion. Perhaps Kingman has had a bit more success with his colts but I can’t see that he won’t be as successful with his fillies in time.”

Glen Hill has horses in training in both North America and Europe, and while plans are undecided for this filly, she is likely to remain over here for the time being.

“She’s a filly who could go anywhere,” said Bernick. “But she’ll probably start off over here. She looks like she could be a miler and our really good filly races over that distance don’t really start until the older horse programme. So hopefully she’ll do well over here before then.”

He added: “Prize-money is a problem over here, no question. And it’s an issue that needs to be addressed. But we love having horses over here, we love the racing and we love the business. If you can get black-type here, it places an excellent value on them. The quality is so well established and highly regarded all over the world and when they do well, there’s always a benchmark value. You can’t argue with the market.”

The sale continues tomorrow at 11am. 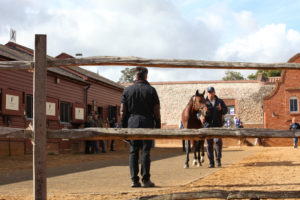