Recent winner Wood Ranger was snapped up by Qatari owner Hassan Ali Abdul Malik for €64,000 at the Goffs Online Summer Sale on Tuesday.

Noelle Walsh’s homebred, a three-year-old son of Kodi Bear, has won twice from nine starts including at Naas last month where he made all to land a 6f handicap for trainer Willie McCreery. The gelding hails from the family of Irish 1,000 Guineas runner-up Pennkenna Princess.

Speaking to Racing Post Bloodstock, McCreery said: “I’m pleased for Noelle and her husband Jim, they couldn’t get a bid for him at the sales and he’s already won about €47,000.

“He’s a nice, solid horse who has been very consistent and given them a lot of fun – it was nice that the first time Jim and Noelle could actually see him run was when he won at Naas the other week.

“It’s only a bit of a shame that we had him in the Scurry [at the Curragh] on Saturday, which is a very valuable race, but it closed before the sale was finished and we didn’t keep him in as obviously we didn’t know where he was going.”

The Aga Khan offered six horses at the timed online auction with the top lot from their draft being Ebasari, a three-year-old gelding by Lope De Vega, who was bought by Willie Mullins for €47,000.

Goffs Group Chief Executive Henry Beeby said: “We are pleased with a satisfactory level of trade in our Online Summer Sale which proved once again that Goffs Online is a timely and successful platform for selling horses in training to an international audience at relatively low cost to the vendor.

“Goffs Online has turned over more than €10.5 million since its introduction in 2020 and is now a permanent fixture at Goffs, offering an additional avenue to the market place at all our sales both in person and virtual.” 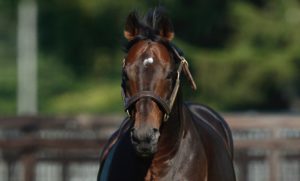