Wonderful Tonight’s journey to competing in this year’s Prix de l’Arc de Triomphe took another step forward as she captured the Lillie Langtry Stakes at the Qatar Goodwood Festival on Saturday.

Denied the chance to participate in last week’s King George VI and Queen Elizabeth Stakes due to firm ground, Wonderful Tonight was granted her favoured conditions after nine millimetres of rain fell overnight at the West Sussex venue.

Having won the Hardwicke Stakes impressively at Royal Ascot last month, the four-year-old raced noticeably keen as she was stepped up back to 1m6f for the first time since capturing the Prix de Royallieu at Longchamp last October.

William Buick, who had kept a tight hold of Wonderful Tonight as she tracked leader Makawee for most of the race, allowed his mount to hit the front more than three furlongs from home as she was visibly cruising.

However, Buick had to keep Wonderful Tonight up to the task as she appeared not to be doing much in front as outsider Tribal Craft attempted to reel her in. But it was not to be as the filly stayed on to win by two lengths.

“You kind of have to break her stride the whole way as she wants to go. She probably has more speed than last year. You could probably get away with dropping her down in trip, rather than stepping her up.

“I decided not to run her in the Nassau as I wanted Emma Banks [Lady Bowthorpe, owner] to win the race, so we went for the Lillie Langtry instead.

“She will probably have a run in the Yorkshire Oaks or at Deauville next. She will then go for the Prix Vermeille before the Arc.”

Buick added: “It’s a mile and six furlongs. I know she has won over this trip before in Paris last year, but I think she’s a bit speedier now. She doesn’t need to be running over this trip again.

“To be honest, she races how she always does. She’s energetic and I was delighted to get a lead on her. We went slow and she took it up a fair way out but has stuck on all the way to the line.

“She has got a bit stronger since last year and with that she has probably got a bit quicker. This trip probably stretches her a bit now but she’s very good, so she has got the job done.

“It’s a long way on this ground, it’s heavy and hard work. We opted to go to the stands’ side just to get a bit of better ground. She’s got the crowd on one side and it’s a lot for her to take in, but she’s a magnificent filly.

“I think she is a different filly to last year. She has more pace, is more consistent and is just better. She is a very good mover so there is no real reason why she should want soft ground. Her form suggests she is better on it, but if it was Good to Soft or Good ground, I wouldn’t be worried.

“If the ground came up like this [in an Arc], she is a class filly and you would have to give her a chance. She won a good Hardwicke, was impressive that day, and is now unbeaten in her last four races at Group 1 or Group 2 level.”

Her owner Chris Wright was on hand to witness the performance and he said: “It was great to watch. I thought Jeff Smith’s filly [Tribal Craft] gave us a bit of an anxious moment in the last furlong maybe but half a furlong out, it was alright.

“My personal view is that I wouldn’t go over a mile and six in a hurry. I think she would be happier in a fast-run mile and a half in the Arc.

“We’d like to get a couple more runs into her before the Arc if we can. There’s the Yorkshire Oaks, which is going to be a tough race, and, depending on the ground, there is the Prix Pomone at Deauville the same weekend. Then I suppose you have to look at the Vermeille, which she ran in last year and was beaten a couple of lengths, but the ground was pretty fast that day.”

There was a first victory in the Stewards’ Cup for trainer Michael Dods as Commanche Falls came with a late withering run to win the 6f handicap.

Winning jockey Connor Beasley said: “This means a lot. Commanche Falls is a horse that’s just got better and better with each run.

“Fair play to the boss and the team at home. They’ve got him in tremendous form. He comes to every gig and today was his best performance ever.

“He travelled really well today and when I got him off the bridle and got a bit of space, I knew he would always dig deep for me – it was a fantastic result.

“The far side were ahead of me when I looked with about two and a half furlongs to go. However, once I got him rolling, Commanche Falls digs deep. Once I got him off the bridle I felt he was eating up the ground and it all happened well.

“He has progressed with each race, has got better and better and today was a career best for me and the horse. 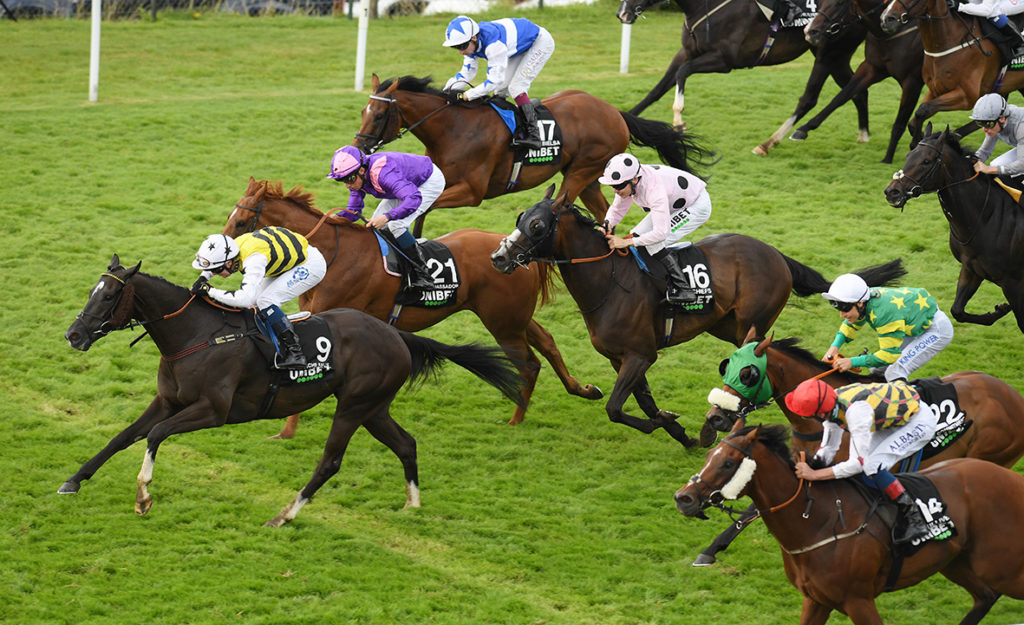 “I had a bad fall at Wolverhampton in 2015. I fractured my skull, did my neck and back and did a good job on myself.

“There were always doubts, but there were no doubts in my mind about coming back. I went to Jack Berry House and was off for eight months in total. I came back and my first two rides were at Wolverhampton – it was some story to tell.

“I always had it in my mind that I would get back to where I wanted to be.”

Winning co-owner Ian Drysdale added: “It was amazing, absolutely amazing. We weren’t sure he would like the ground but he’s been coming up the weights and we knew that he would get in so we decided to take our chance.

“The first three furlongs we couldn’t see him but that’s just the way he runs. Once we saw him we were confident that he would finish his race strongly. The heart was fluttering a bit.

“We’ve been very lucky because Dakota Gold won some very nice races for us. The first time Dakota Gold won a big race we were in cloud cuckoo land but this is the biggest occasion we’ve had. This fella is his half-brother. The mare sadly died when foaling this horse.

“He’s in the Ayr Gold Cup. The handicapper will have his say but Michael [Dods] makes all the decisions.”

In the Stewards’ Sprint handicap, the consolation race for the Stewards’ Cup, it was the John Quinn-trained Mr Wagyu who emerged victorious.

A double on Saturday for Andrew Balding with Oo De Lally and Imperial Fighter guaranteed the leading trainer award went his way with five victories recorded at this year’s Qatar Goodwood Festival.

His biggest winner of the week was Alcohol Free in Wednesday’s Sussex Stakes and the trainer said: “I thought we had a chance coming into today and we’ve had a couple of winners.

“We have targeted this meeting with the right horses. The ground suited most of them and it has been a good week.

“It was a special moment for us with Alcohol Free. She is a special filly and we really enjoyed it.”

Elsewhere on the final day of the Qatar Goodwood Festival, the 1m6f handicap went to the Michal Bell-trained Prince Alex while Amanda Perrett’s Rebel Territory took the 1m1f handicap that closed the meeting. 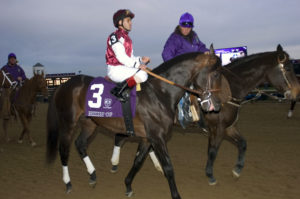 Up Next
Death of leading American sire Bernardini