Wildenstein Stables to disperse at Goffs

A draft of 110 thoroughbreds from one of racing’s most decorated owner-breeders will go through the ring at Goffs Orby and November Sales and is likely to draw bloodstock buyers from all over the world, in what will be a rare opportunity.

The Wildenstein operation began with Daniel Wildenstein – one of the most powerful art dealers to have ever lived – whose passion for racing saw him crowned champion owner in France in 1969, on the Flat and over jumps.

He then went on to win four Prix de l’Arc de Triomphe’s, the first coming in 1974 with Allez France. This was followed by back-to-back victories nine years later with All Along and Sagace, with his final victory in the prestigious contest coming with flashy chestnut Peintre Celebre in 1997, which further consolidated the Wildenstein name in the top echelons of the sport.

The stock at Goffs will include 44 horses in training, with Group 2-placed and Listed-winning mare Lady of Kyushu, and Prix Vaniteux-fourth Asterina, likely to take highest billing after being trained this season by Alain de Royer-Dupre.

The Chantilly-based handler also has an unraced two-year-old son of Dansili, named after a famous river in Chile, who could feature prominently in the ring given his entry in next year’s Investec Derby. They will be offered along with 19 yearlings at the end of the Orby sale which takes place between September 27 and 28.

The mares and foals, numbering 27 and 20 respectively, will enter the auctioneer’s house in the November sale and include Poule d’Essai Des Pouliches winner and Prix de Diane runner-up, Beauty Parlour.

The daughter of Deep Impact, who happens to be in foal to multiple Group 1-winner Kingman, ran her last two races in public for the late Sir Henry Cecil, at a time when the family transferred 14 horses to the former Warren Place-handler and Luca Cumani.

The seven-year-old’s filly foal by Dansili is bound to raise significant interest as is her yearling colt by Dubawi, while her half-sister Blue Kimono also up for grabs is in foal to none other than impeccably-bred Epsom Derby winner, Australia.

Not far behind Beauty Parlour in terms of racecourse prowess is Peinture Rare, a daughter of Saddler’s Wells who ran 11 times in her career and achieved success at Group 2 level in the Prix de Pomone.

Like Beauty Parlour, she was trained by Elie Lellouche, one of the Wildenstein’s most coveted trainers. He memorably handled top-class middle distance performer Planteur, for the Wildenstein’s, his career highlights coming in the Group 1 Prix Ganay and a third-place finish in the Dubai World Cup for then new connections, Ahmed Al Falasi and trainer Marc Botti.

“The Wildenstein Stables Ltd dispersal represents the most exciting collection of horses to be offered anywhere in the world this year and it is a real privilege for Goffs to be appointed the auction house of choice,” reflected Goffs group Chief Executive, Henry Beeby.

“In my 34 years in the business there are a handful of names that you associate with the very best – Robert Sangster, the Aga Khan, Khalid Abdullah, the Maktoums, Coolmore, the Niarchos family for example – and the Wildenstein name is certainly among their number.”

Despite this planned dispersal over the next few months, the family still plan to remain involved through Ballymore Thoroughbred Ltd, one of their ownership arms which is managed by bloodstock agent, Anthony Stroud.

Ballymore has already made it’s mark having landed the 2014 running of the 1,000 Guineas with Miss France. 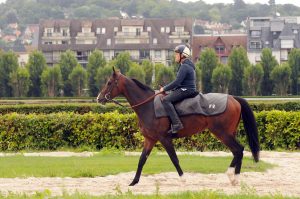 Up Next
Blessing never headed to land first Group 1