Wild Coco looks a star in the making

Heavy rain during Saturday afternoon at Newmarket failed to dampen the enthusiasm of Julian Dollar and his team from Newsells Park Stud, sponsors of the Newsells Park Stud Stakes, a 12-furlong Listed race for fillies and mares which is registered as the Aphrodite Stakes.

This race has a history of throwing up future stars, such as Dar Re Mi, and this year’s winner Wild Coco definitely comes into that category. Easily the least experienced runner in the field, the Henry Cecil-trained three-year-old had her rivals, headed by last year’s disqualified Oaks runner-up Meeznah, strung out like washing in her wake as she passed the post in front, despite her jockey Eddie Ahern riding at 2lb overweight. Races such as the Galtres Stakes and the Park Hill Stakes, or even the St Leger, would seem natural targets.

As Newsells Park is owned by the Jacobs family, who remain pillars of the German bloodstock community, it is particularly appropriate that Wild Coco is owned and bred by Gestut Rottgen, a Cologne-based stud which put her in training with Cecil after she failed to reach her reserve as a yearling at Tattersalls in October 2009. She is the only horse which Gestut Rottgen has in training in the UK, but it has nearly 20 in training back in Germany.

Wild Coco is the product of two high-class German-bred racehorses. She is the latest good young stayer to emerge from the first crop of the young Monsun stallion Shirocco, who won the 2004 German Derby and the 2005 Breeders’ Cup Turf in the colours of his breeder Baron Georg von Ullman; while her dam Wild Side won the Group Two Europachampionat over 2400m at the Hoppegarten in Berlin as a three-year-old in 2000.

Another good German-bred horse from this family is Wild Passion, a Group Three winner as a three-year-old in Germany in 2003 who subsequently won the Grade One Royal Bond Novice Hurdle at Fairyhouse in 2004 when trained by Noel Meade. Wild Passion’s dam White On Red was a half-sister to Wild Side’s dam Wild Romance.

Wild Coco’s emergence in the Newsells Park Stud Stakes as a budding starlet will have been particularly pleasing to the sponsors because Wild Side currently has a foal at foot by young Newsells Park stallion Mount Nelson. 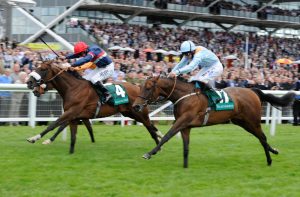 Up Next
Great investment showing profit