By The Owner Breeder staff 12 September 2016

After being out of luck in the English equivalent only 24 hours before – with warm favourite Idaho stumbling and unseating his rider in the Doncaster home straight – Ballydoyle were hoping there would be no surprises in the Group 1 Palmerstown House Estate Irish St. Leger.

Their Ascot Gold Cup-winning four-year-old Order Of St George, who was flawless when running away with this very race twelve months ago couldn’t find what was required in this year’s renewal at highly prohibitive odds.

Only four stayers lined up for the €230,000 contest and were taken along by the Willie Mullins-trained Wicklow Brave. Order Of St George was held up in a detached last under Ryan Moore tracking another former Ascot Gold Cup winner in the shape of Trip To Paris.

As Frankie Dettori started winding the pace up on the leader into the straight, the gelding gained a couple of lengths over his opponents whilst the favourite made ground to chase. Although faced with a gradually diminishing advantage Wicklow Brave repelled the challenge of the Coolmore charge who couldn’t get past.

The seven-year-old son of Beat Hollow gives his all-conquering Closutton handler his first Classic winner on the Flat having coveted the majority of big prizes in the National Hunt sphere.

Wicklow Brave himself had shown high-class placed form this season since his switch from obstacles at the end of last year. A close fourth in the Goodwood Cup at the end of July was followed by a creditable third behind Quest For More in the Lonsdale Cup at York’s Ebor meeting.

Joseph O’Brien was also to reach a landmark success on the afternoon as his two-year-old filly Intricately narrowly triumphed in the Group 1 Moyglare Stud Stakes over seven furlongs. Ridden by brother Donnacha, the daughter of Fastnet Rock held off the late challenge of Hydrangea trained by Joseph’s father.

Coolmore were to get their names on the score-sheet courtesy of Norfolk Stakes hero Churchill who made no mistake in the Group 1 Goffs Vincent O’Brien National Stakes. Moore delivered the two-year-old colt between horses two furlongs out and the duo came clear in the run to the line sealing an impressive four and a quarter length victory over British-trained pair Mehmas and Lockheed.

The son of Deep Impact scored narrowly in the Japanese Derby back in May and left it late this time around under Christophe-Patrice Lemaire. After tracking the leaders in third throughout, the duo came with a sustained run down the outside to get up by a neck from the Sir Michael Stoute-trained Midterm.

The fillies took centre stage in the Group 1 Prix Vermeille which was won last year by subsequent Arc heroine Treve. Prix de Diane runner-up Left Hand sporting the famous Wertheimer silks came with a strong challenge inside the final furlong under Maxime Guyon to narrowly deny Godolphin’s Endless Time, who cut out most of the early running.

Another small field was assembled for the Qatar Prix du Moulin de Longchamp over one mile which saw the Andre Fabre-trained Vadamos put up a mighty fine performance.

The five-year-old son of Monsun was last seen chasing Ribchester home in the Prix Jacques le Marois and after easing to the front inside the three furlong marker, came clear of his rivals to win by a length-and-a-quarter under Vincent Cheminaud. 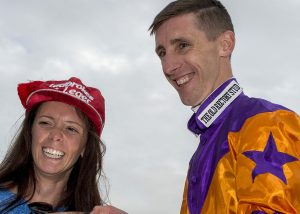