Stallion’s very first runner, Thunder Love, scored on debut at Kempton on Wednesday and his bright start slots neatly into a profile that is underpinned by speed

First impressions are everything in the career of a young stallion and in the case of Darley’s Profitable, the outlook is certainly positive following the victory of his very first runner in a 5f novice at Kempton on Wednesday.

The market took no chances on the filly in question, Amo Racing’s Thunder Love, sending her off as the 15-8 favourite in a field of ten. Showing a professional attitude, the George Boughey-trained youngster was fast enough out of the stalls to be able to hold a prominent position behind the leader Chandrika before quickening clear under Rossa Ryan for a three-and-a-quarter length success.

A day later at Chantilly, another Profitable debutante, Miramar, also ran second in a 5f maiden.

While it’s very early days for these young stallions, Profitable’s bright start slots neatly into a profile that is underpinned by speed. He is the latest son of noted sire of sires Invincible Spirit to come under the microscope, is out of an Indian Ridge mare and in keeping with his own sprint background was a top-class speedball on his day, notably when capturing the King’s Stand, Temple and Palace House Stakes during a major winning spree in 2016. Tough to go with it, he wound up winning five of 23 starts over four seasons of racing with Clive Cox.

Profitable did most of his racing in the colours of Alan Spence, who paid 95,000gns for the colt through Cox from his breeder, Con Harrington, at the Tattersalls October Sale in 2013. At the end of the 2016 season, with his value as a commercial proposition sealed, Profitable changed hands to Godolphin, for whom he went on to run placed in the 2017 King’s Stand Stakes and Prix de l’Abbaye before heading to Kildangan Stud, where he joined the Darley roster at a fee of €12,000. He is standing the current season at €10,000.

In light of the European breeding community’s fondness for commercial speed, Profitable was understandably warmly received by breeders and pinhookers, as a first crop that consists of 130 two-year-olds that sold for up to 160,000gns last autumn attests. That particular highlight, a colt out of the Dansili mare Ihtifal pinhooked by JC Bloodstock for €65,000 as a foal, was one of five six-figure Profitable yearlings purchased by Shadwell Estate Company; in addition to the Ihtifal colt, they included his most expensive filly, a half-sister to the Classic-placed Irish Rookie who cost 150,000gns and is now in training with Owen Burrows.

At the other end of the spectrum was Thunder Love. Bred by Mickley Stud out of Listed winner Nantyglo, herself a granddaughter of blue hen Solo De Lune, she was picked up by Joanna Morgan for just 13,000gns as a foal and resold at Part 2 of the Tattersalls Ireland September Sale to Robson Aguiar for £18,000.

“She’s pretty fast and I think she’ll be seen to better effect on fast ground,” says George Boughey. “She’s very straightforward, she has a great mind – she walked round Kempton like she’d been there 100 times before.”

Sprinter speed and an easy attitude don’t always go hand in hand but in Profitable, there are already grounds for thinking that the combination could be an emerging trend.

“Profitable himself had a very good temperament, he was just a wonderful horse to be around,” says Clive Cox. “He was very straightforward and from what I’ve seen, he seems to be passing that on.

“Thunder Love was really good for ‘Prof’. She’s obviously talented. Watching her on Wednesday, she looks to have some of the speed that he possessed.”

Cox has five Profitable two-year-olds in his care, among them a half-brother to Listed winner Argentero bought for £72,000 at the Goffs UK Premier Sale and the filly out of Sassy Gal who topped the Tattersalls Ascot Yearling Sale at 58,000gns. Both were purchased by Kevin Ross Bloodstock on behalf of Paul and Clare Rooney.

“All mine are nice, they’re athletic with very good minds,” he says. “They’ll tell us in the next few weeks how forward they might be but they look to have quality and speed. I think that’s the Invincible Spirit coming through.”

“Watching her on Wednesday, she looks to have some of the speed that he possessed”

Profitable broke his maiden second time out at Sandown in July of his juvenile season and although he didn’t win again that year, rose to a rating of 98 off the back of three consecutive narrow defeats in nursery company at Ascot and Haydock. From then on, he continued to progress.

“He was quick all the way,” recalls Cox. “To begin with, using that speed was almost the undoing of him, he was so quick. But when we fined tuned things with him, he was very good. And as he got stronger, he progressed with it.”

Profitable is one of a notable array of horses to have passed through Cox’s hands en route to a career at stud, a point that was further underlined by the result of Thursday’s two-year-old race at Chantilly in which Miramar ran second to the impressive Diablotine, a second-crop daughter of the high-class Cox-trained miler Kodi Bear. Lethal Force and his best son Golden Horde, now in his first season at Montfort et Preaux in France, were also trained at Beechdown Farm as was Harry Angel.

“It’s very rewarding to see these horses go on and do well, and it’s something that I’m very proud of,” he says. “It’s great to see Profitable make that first step, and for what he’s done, I think he’s very attractively priced to breeders.”

“She’s a real daisy cutter and Rossa came back and said that even Kempton was on the slow side for her,” says Boughey. “We’ll have to look at something like the Marygate at York. That’s six weeks away so we might take in a novice on the way. That’s where the novice system works so well – it gives them that bit more experience to go forward and she can run in one of those before we look at York. She’s exciting.” 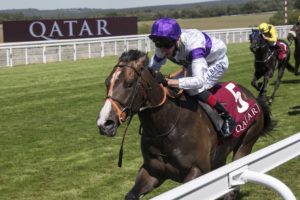