Westover was cut into 25/1 for the Cazoo Derby after holding on in a desperate finish to the bet365 Classic Trial at Sandown Park on Friday.

Making his seasonal reappearance, the Ralph Beckett-trained colt was settled behind the leaders by Rob Hornby and having been angled out behind the leader Goldspur, was in the process of wearing down the Godolphin favourite only to be collared by Cash, who had made up an enormous amount of ground from the back of the field. At the line, there was a nose in it to the good of Westover, although Cash undoubtedly went into just as many notebooks given how green he had been during the early stages; indeed, he was slashed in some places into 20/1 for the Derby.

For Juddmonte-homebred Westover, it was his second win in four starts following a debut win at the track last August.

“I’m delighted,” said Hornby. “I really like this horse, I rode him twice last year and won on him here. He’s a serious unit, a beast, and we always thought he would be better at three.

“He was still quite keen in the race but he really picked up when I asked him. He rolled around a bit in front but got his head down when it mattered.

“He’s a very big horse and Epsom isn’t always easiest for those to handle. But he’s very light on his feet and well balanced.”

The 90th stakes winner for Frankel, and one of two on the day alongside Mostahdaf, Westover is a brother to Group 3 winner Monarchs Glen, who ran fourth in this race back in 2017. Their dam, Mirabilis, is a Grade 3-winning Lear Fan half-sister to Prix de Diane heroine Nebraska Tornado.

Many expected the bet365 Mile to fall to a member of the fairer sex on Friday but instead of Alcohol Free, it was Cheveley Park Stud’s Lights On who obliged, coming out on top in a tight finish with the better fancied mare back in third.

Backed into 17/2, Lights On was ridden for a bit of luck by Ryan Moore, quickening through horses to take it up off Rhoscolyn a furlong out. By contrast, Mutasaabeq was short of room at a crucial moment and although he came with a late rush in the final 100 yards, Lights On was always doing enough to hold him by a neck. Alcohol Free, making her first start for the year, was caught out wide under Rob Hornby and kept on to finish another length-and-three-quarters away in third.

“She’s a nice Siyouni filly who kept improving last year,” said Moore. “It didn’t go as smoothly as I would have liked. She was drawn one and I had no option but to ride her for a bit of luck. Luckily it worked out.

“She travelled nicely and had to quicken through horses – there wasn’t a lot of room. Hopefully she’ll keep progressing.”

Now the winner of five races, Lights On bears the hallmark of a typical Sir Michael Stoute improver. She was bred by London Thoroughbred Services out of the Listed-placed In The Light, by Inchinor, and therefore a half-sister to Group 3 winner Karar.

There may have only been three runners but the Gordon Richards Stakes briefly became a thrilling contest as the runners fanned across the track in full flight.

Jim Crowley, however, still had a bit up his sleeve on the 1/2 favourite Mostahdaf, and wound up by his partner, the four-year-old fought off Foxes Tales to make a clear-cut winning return for John and Thady Gosden with a bit in hand. The early pace-setter Juan Elcano crossed the line in third.

“I haven’t had to get too tough with him,” said Crowley. “He got the mile-and-a-quarter well and he’ll come on for it. The other horse [Foxes Tales] went a neck up on me and my lad is bit of a battler and every time I brought him close to the other horse, he stuck his neck out a bit more. He’s a smashing horse, physically he’s a strong chap and hopefully he should improve again. We would love it if he could make into a Group 1 horse – his half-sister Nazeef did.”

Bred on the same Frankel – Dubawi cross as last year’s Derby and King George hero Adayar, Mostahdaf was the second winner of the day for Shadwell Estate Company after Wanees, successful in the Esher Cup. He was bred by the late Sheikh Hamdan out of Listed winner Handassa and is a half-brother to the dual Group 1 winner Nazeef. 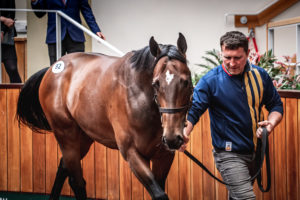