‘We’re not here to be beaten’

A week after landing in the UK, Black Caviar made her first official appearance at a 5am press call in Newmarket on Thursday.

Led by Tony Haydon with Paddy Bell in the saddle, Black Caviar also had her full-time bodyguard shadowing her as she completed her leisurely stroll from Abington Place Stables to the famous Al Bahathri gallop. The only time the mare was without her flankers was during her hack canter along the undulating all-weather strip in front of the media scrum.

Back at Abington Place, Black Caviar is hosed down after her workout

“She’s rock-hard fit and she’s ready to go,” said Jeff O’Connor, racing manager for Peter Moody’s stable. “The owners wanted her to come here and we thought that the best way to fulfil that wish was to dodge Dubai. We’re not here to be beaten, that’s for sure.”

With Ascot’s clerk of the course Chris Stickells reporting that the ground for the start of the Royal Meeting is likely to be on the easy side of good, O’Connor is confident that the going won’t be an issue.

He said: “We’d prefer good ground but we won’t be using that as an excuse if she’s beaten on wet ground.”

He also confirmed that Black Caviar’s regular jockey Luke Nolen will arrive on Monday and will have a spin on the mare next week prior to her run in the Diamond Jubilee Stakes a week on Saturday. 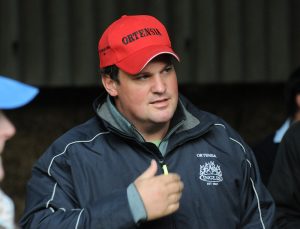 Also arriving in the UK on Monday is Craig Williams, who is set to partner Black Caviar’s compatriot Ortensia. The seven-year-old mare is stabled with Black Caviar at the yard used by Australian ex-pat trainer Jane Chapple-Hyam, as is Hong Kong raider Joy And Fun.

Ortensia merely stretched her legs with a walk around the indoor ride following a pleasing gallop on Wednesday. She has been in Newmarket for more than a month having travelled to the UK from Dubai, where she won the Al Quoz Sprint on Dubai World Cup night.

“We wanted to get here early, settle in and give ourselves every chance,” said her trainer Paul Messara, 34, who brought another mare, Alverta, to race in England in 2010. “The ground is a bit of a concern for us as she’s better on the top of the ground.”

Almost overlooked with the prolonged clamour around Black Caviar was Joy And Fun, who finished a length and a half behind Ortensia when third in Dubai, having won the Group 1 Chairman’s Sprint Prize at Sha Tin on his previous start. 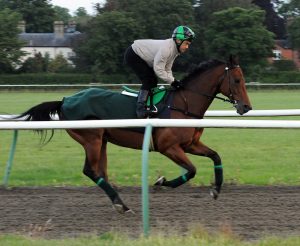 Derek Cruz aboard Joy And Fun on Newmarket’s Long Hill

His trainer Derek Cruz rode him in a steady canter up the Long Hill Polytrack and pronounced himself happy with the shape his stable star is in ahead of his rematch with Ortensia in Tuesday’s King’s Stand Stakes.

“We’ve gone for that race to get away from Black Caviar,” said Cruz. “Joy And Fun is striding out well at the moment but he does prefer faster ground.”

Based on the other side of town at Egerton House Stables is another Dubai World Cup night winner, Krypton Factor, who lowered the colours of the mighty Rocket Man in the Golden Shaheen. The trip to Newmarket is something of a homecoming for the four-year-old son of Kyllachy as he started his career under the guidance of Sir Mark Prescott before being sold in 2010 to race in Bahrain for 100,000gns.

His trainer Fawzi Nass said: “We still have to see him perform on the turf at this level, and unfortunately we have Black Caviar in our race. It will take a hell of a horse to beat her.” 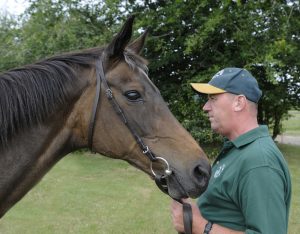 Up Next
Darara dies at 29