For the third consecutive year, the Coral Welsh National remained in Wales as the Sam Thomas-trained Iwilldoit turned in a gritty staying performance to capture the Chepstow showpiece on just his fourth start over fences.

For trainer Sam Thomas, it was a landmark result and made all the sweeter by the fact that Thomas is based just 30 miles away from Chepstow at Dai Walters’ Lisvane base.

“I’m lost for words,” Thomas told ITV Racing. “It was enjoyable to watch and it’s great for everyone at home – it means everything.

“We’re very lucky to have some amazing facilities and this horse has been on the treadmill a lot as he doesn’t take his races all that well. All credit to the horse to come back.

“It’s a special day and a big thanks to everyone who has supported me from day one.”

Although sparingly raced over fences, there had been a suggestion that a staying performance of this calibre was within Iwilldoit’s compass only earlier this month when the 24-length winner of Chepstow’s Welsh Grand National Trial Handicap Chase, a performance that allowed the gelding to sneak into the bottom of the National weights.

Partnered again by Stan Sheppard, Iwilldoit duly stepped up again. Always in the first division as Ramses De Teillee cut out the running, Iwilldoit jumped to the front down the back and from then on maintained a relentless gallop to burn off his rivals. Highland Hunter was the only one to throw down a serious challenge but Iwilldoit always had enough in reserve to keep up the gallop and eventually cross the line nine lengths clear.

Highland Hunter was a game second for Paul Nicholls, and seven lengths clear of the third Truckers Lodge. Only five of the 20 runners finished.

“It’s first time I’ve got down to ten stone in five years but it was worth it,” Sheppard told ITV Racing. “I didn’t feel like he was going that fast, he was racing within himself and he just jumped his way to the lead down the back. He was able to give himself breathers – if you get into a fight with him, he just takes you on. Every time he heard something coming to him, he picked up. I gave him a kick and a slap and he went again.”

Bred in Britain by Reg Brown, Iwilldoit belongs to sole Shade Oak Stud-sired crop of Flying Legend and is out of Lyricist’s Dream, a winning hurdler by Dreams End. Incidentally, Thomas also partnered Lyricist’s Dream to her sole victory at Uttoxeter in 2007. 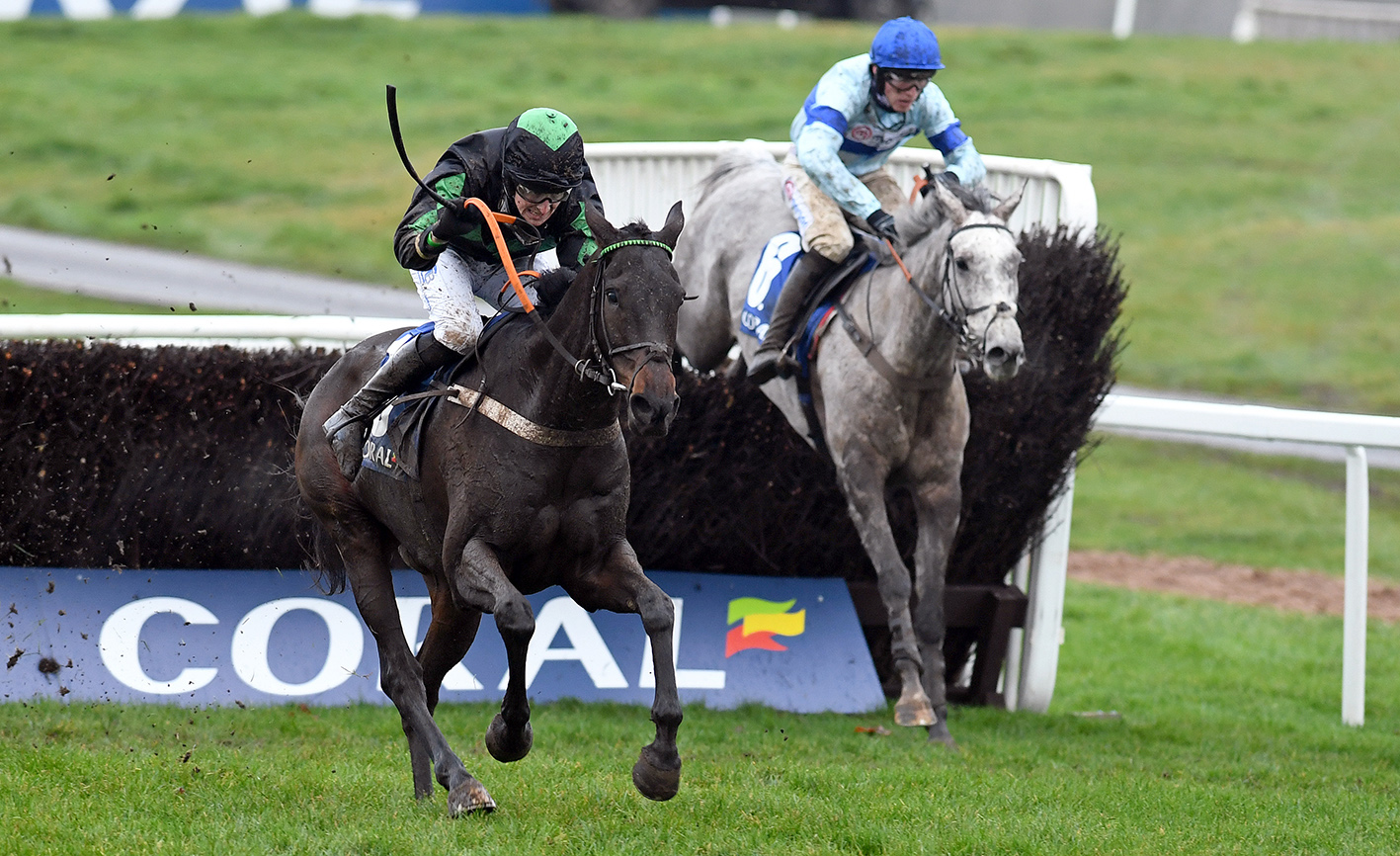 Earlier on the card, Porticello was cut into 8/1 in some places for the Triumph Hurdle at Cheltenham in March after running away with the Grade 1 Coral Finale Juvenile Hurdle.

The Sholokhov gelding cruised to the lead two hurdles from home and having fended off Saint Segal, went on to pull clear for an eight-and-a-half length victory. Saint Segal held on for second, three-quarters of a length ahead of the third Forever William.

For the father and son combination of Gary and Jamie Moore, the win marked their first Grade 1 success since Sire De Grugy’s Tingle Creek Chase win at Sandown in 2015.

“That was great,” said Gary Moore. “It was the first time he had a true-run race and the hurdles that were missing didn’t go against him either. There’s a few unlucky ones and we had a lot of things go in our favour. But you can’t knock him, he couldn’t have done anymore than he did.”

It was the third win for French recruit Porticello, who had previously been successful in the Listed Wensleydale Hurdle at Wetherby. He subsequently ran second to Knight Salute in the Grade 2 Summit Juvenile Hurdle at Doncaster. 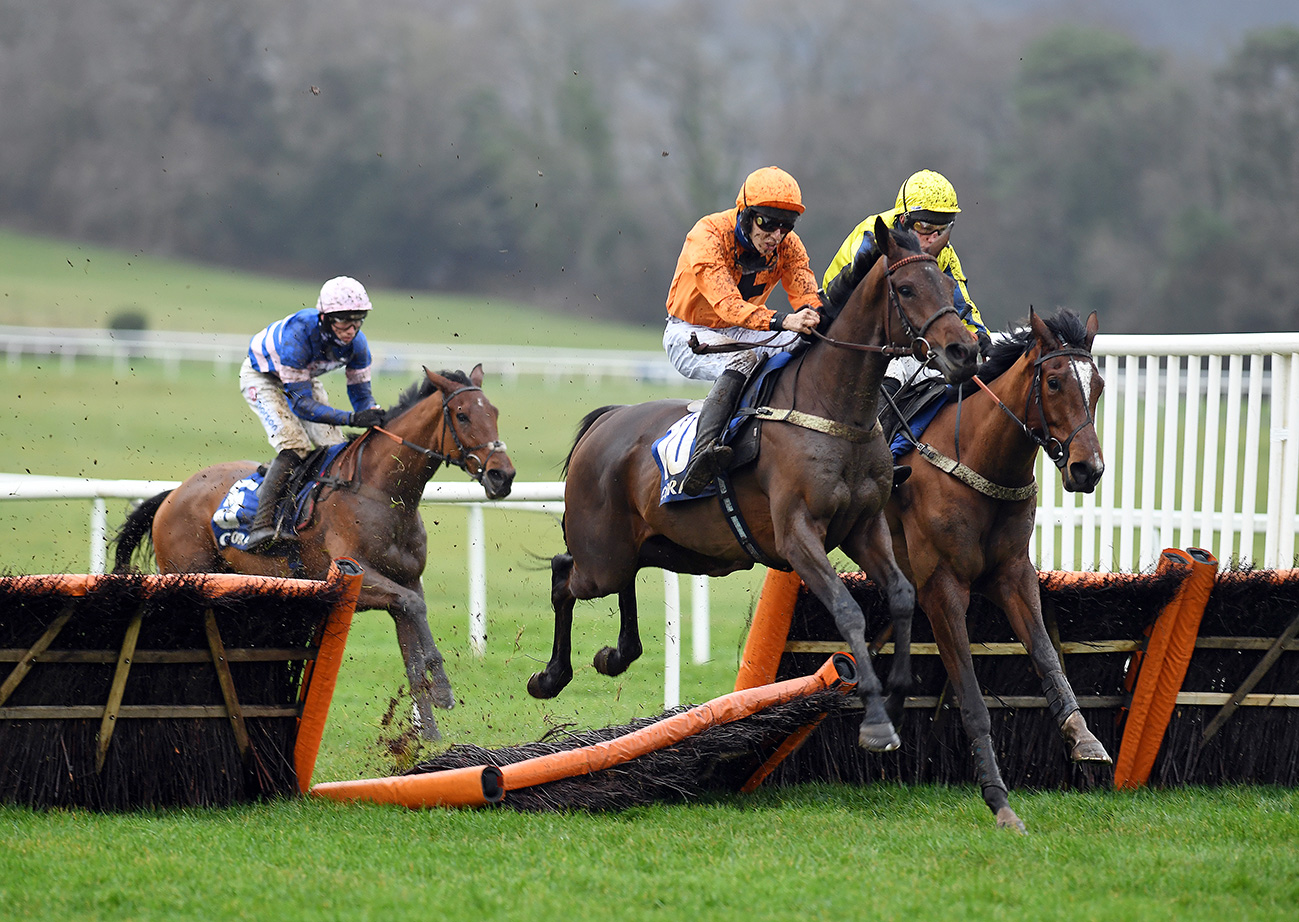 Porticello (far side): was the impressive winner of the Coral Finale Juvenile Hurdle. Photo – Bill Selwyn

Kempton Park was lit up on Monday by scintillating return from Shishkin in the Grade 2 Desert Orchid Chase.

Making his belated seasonal return for Nicky Henderson, last year’s Arkle Chase hero made light of his absence, sauntering to the front three out before galloping clear under Nico de Boinville for a resounding victory. Tingle Creek Chase winner Greaneteen tried in vain to reduce the deficit but at the line he was ten lengths adrift of the winner, with Sky Pirate another three lengths away in third.

“That was pretty phenomenal,” de Boinville told ITV Racing. “We have been having our struggles with him and even there he’s taken a really good blow going into the last and I’ve just had to look after him going into that.

“The team have done a fantastic job with him. We’ve taken a bit of a chance with him today but his class has shone through.”

Bookmakers responded by firming Shiskin’s place at the head of the Champion Chase betting, in some places as short at 4/5.

“I am genuinely thrilled with him,” Henderson told ITV Racing. “Yes, it’s a relief because I was nervous that we weren’t really there with him but we had to come out.

“He was in a bad place for three weeks and that’s why he didn’t run in the Tingle Creek – he was as flat as a pancake and then ten days after that, his tracheal wash was horrible. I couldn’t have run him as I’d have wrecked him.

“We’re just back in time for this and it was great to see him do that. The temptation was to wait for the Clarence House but I’m glad we came here. He’s not flashy at home and Nico has been in and ridden him a couple of times the last week and said he felt good.

“I’d like to have another run before the Champion Chase but the Clarence House comes quite soon and the Game Spirit is quite close to Cheltenham.” 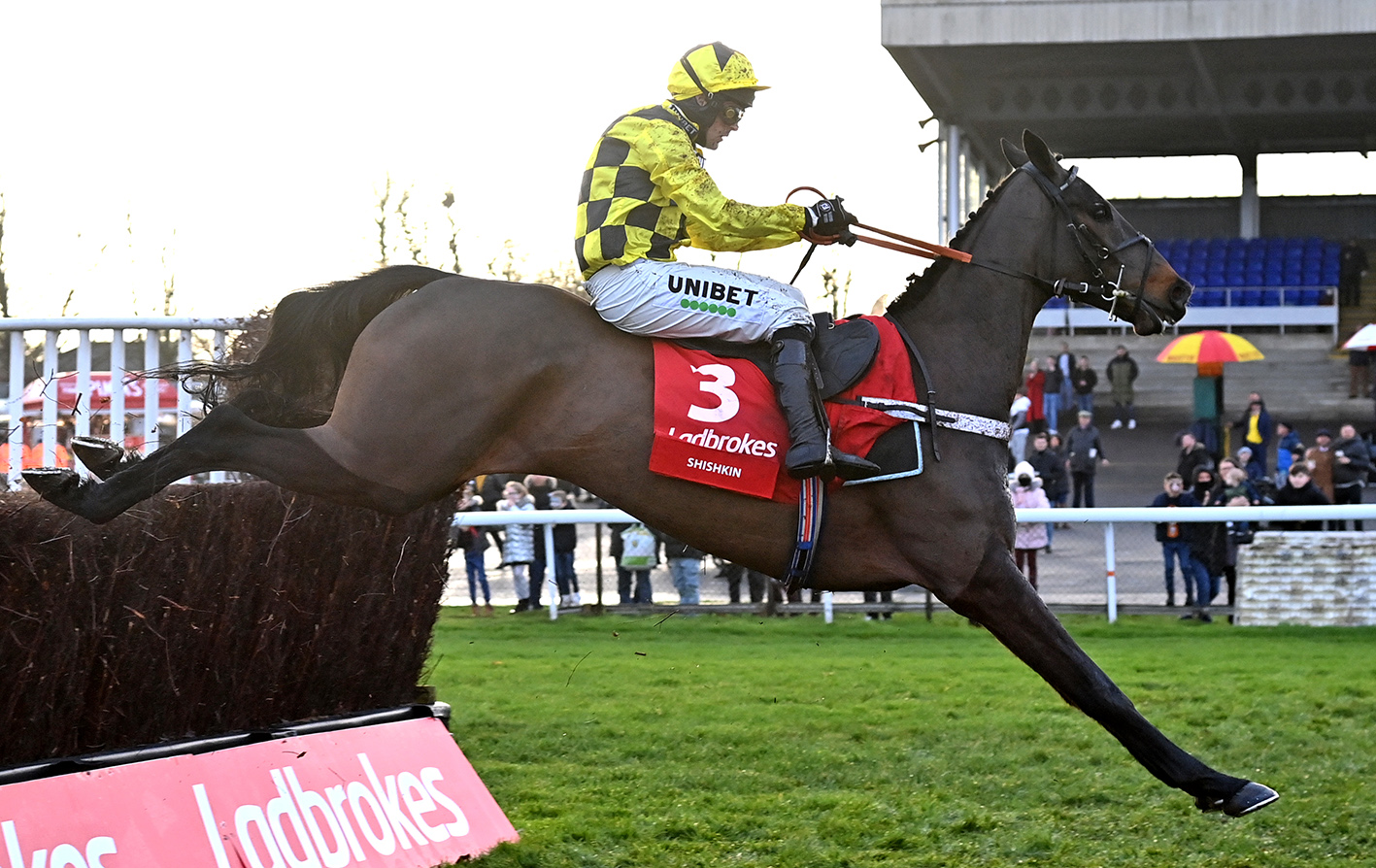 Also at Kempton, Edwardstone justified odds of 8/15 favouritism to defy a five pound penalty and run out the easy winner of the Grade 2 Wayward Lad Novices’ Chase for Alan King.

Previously impressive when successful in the Grade 1 Henry VIII Chase at Sandown, Edwardstone again turned in an exemplary round of jumping, looming alongside Do Your Job approaching the third last before bounding clear for a ten-length win.

The Kayf Tara gelding is now as short as 4/1 in some places for the Sporting Life Arkle Chase at Cheltenham. Sunday’s Grade 1 Racing Post Chase winner Ferny Hollow remains favourite at around 6/4.

“He always starts off a bit fresh in his races but once he drops his head in a race, he’s very clever with his jumping.

“He’s done nothing wrong this year. Today was just a perfect race for him, he’ll probably have a break now and then one more run before Cheltenham.”

Envoi back to form

The race lost much of its lustre with the last-minute absence of last year’s winner Chacun Pour Soi due to a hamstring problem. As a result, only three went to post and the race quickly developed into a match between Battleoverdoyen and Envoi Allen as the outsider Sizing Pottsie lost touch down the back.

Battleoverdoyen momentarily appeared to have the measure of Envoi Allen as the pair rounded the final turn but the Cheveley Park Stud-owned gelding dug deep under Rachael Blackmore to win going away by seven-and-a-half lengths. 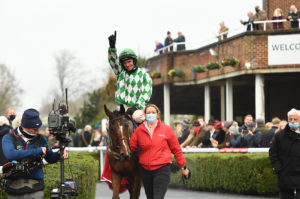