No Nay Never, Fine Needle and Oohood were among the talking points from a busy few days of racing

It was a memorable day for trainer Aidan O’Brien and son Donnacha at Newmarket on Saturday when they combined to land all three Group events on the card.

The treble began in the Group 2 Royal Lodge Stakes (1m) when Mohawk (Galileo) bounced back to his best and led home stablemates Sydney Opera House (Australia) and Cape Of Good Hope (Galileo) in a one-two-three for Ballydoyle.

Never far from the pace, Mohawk was produced with his challenge over a furlong out and ran on well to score by a length and a quarter.

The O’Briens did not have to wait long for their next success, as Fairyland followed up her win in the Group 2 Lowther Stakes at York when holding off old rival The Mackem Bullet by a neck to claim the Group 1 Cheveley Park Stakes (6f).

Fairyland, bred by Tally-Ho Stud and a daughter of their flagship sire Kodiac – sire of 2014 Cheveley Park winner Tiggy Wiggy – was snapped up for 925,000gns at Book 1 of the Tattersalls October Yearling Sale last year, the most expensive yearling by Kodiac to be sold at public auction.

The superb start to No Nay Never’s stallion career continued at Newmarket as Ten Sovereigns confirmed his early promise with a commanding victory in the Group 1 Middle Park Stakes (6f).

Sent to the front two furlongs out by Donnacha O’Brien, Ten Sovereigns was briefly challenged by the Simon Crisford-trained Jash but repelled the challenge to score by half a length.

No Nay Never has now supplied four stakes winners from his first crop when standing at a fee of €25,000 at Coolmore, a fine advert for the talents of his late sire Scat Daddy.

Another day to savour for Aidan

A day later at Naas, Aidan O’Brien combined to great effect with Ryan Moore when Hermosa held off the challenge of Foxtrot Liv to claim the Group 3 Weld Park Stakes (7f).

The daughter of Galileo becomes the fourth Group winner out of the Pivotal mare Beauty Is Truth and is a sister to the top-level performers Hydrangea and The United States.

Taking the lead under Moore, Hermosa was pressed strongly by Foxtrot Liv but found plenty to win by an impressive two and a half lengths.

That victory was followed up in the Group 3 Loughbrown Stakes (2m) when Moore and O’Brien were the masterminds of Cypress Creek’s success. Having been held up in the early stages, the son of Galileo stayed on strongly to beat Twilight Payment by two and three quarter lengths.

O’Brien was also on the mark when Japan, a brother to Sir Isaac Newton and Secret Gesture, followed up his maiden victory at the beginning of September to take out the Group 2 Beresford Stakes (1m) under Seamie Heffernan, defeating favourite and stable companion Mount Everest, the first two both sons of Galileo.

Despite being slow away and pushed along at the halfway stage, the son of Society Rock began to make headway with a furlong to run and kept on well to defeat American Pharoah’s brother St Patrick’s Day by half a length.

The Tony McEvoy-trained daughter of I Am Invincible boasted an impressive race history having finished second in the Golden Slipper and Sires’ Produce Stakes last season, but had yet to taste victory until coming from the back of the field to sweep past Fiesta, Nakeeta Jane and Miss Fabulass, triumphing by a short-head.

Ex-UK performer Hartnell recorded his fourth Group 1 success in Australia with a weight-defying performance that saw him hold off D’Argento and Unforgotten to claim the Epsom Handicap (1m) on the Randwick card.

Hugh Bowman partnered the seven-year-old son of Authorized and in the process recorded a first top-level win in the famous Godolphin blue for Winx’s regular rider.

After being denied in both the Flight Stakes and Epsom Handicap, leading Australian trainer Chris Waller was on the mark thanks to former New Zealand stayer Patrick Erin, who sprang a 15-1 surprise in the Group 1 The Metropolitan (1m4f).

Patrick Erin was all out to defeat stable companion Brimham Rocks, formerly trained by Ralph Beckett in England, who was picked up by his current owners for 340,000 guineas at Tattersalls’ Horses-in-Training Sale last year.

Owners Lloyd and Nick Williams have another candidate for this year’s Caulfield Cup to go alongside The Taj Mahal after the Liam Howley-trained Homesman ran out an authoritative winner of the Group 1 Underwood Stakes (1m1f) at Caulfield on Sunday.

Partnered by Ben Melham, Homesman got the better of the Darren Weir-trained duo Tosen Basil and Humidor to win by a short-head.

The Taj Mahal proved his wellbeing with victory in the Group 3 JRA Cup (1m) at Moonee Valley on September 28. 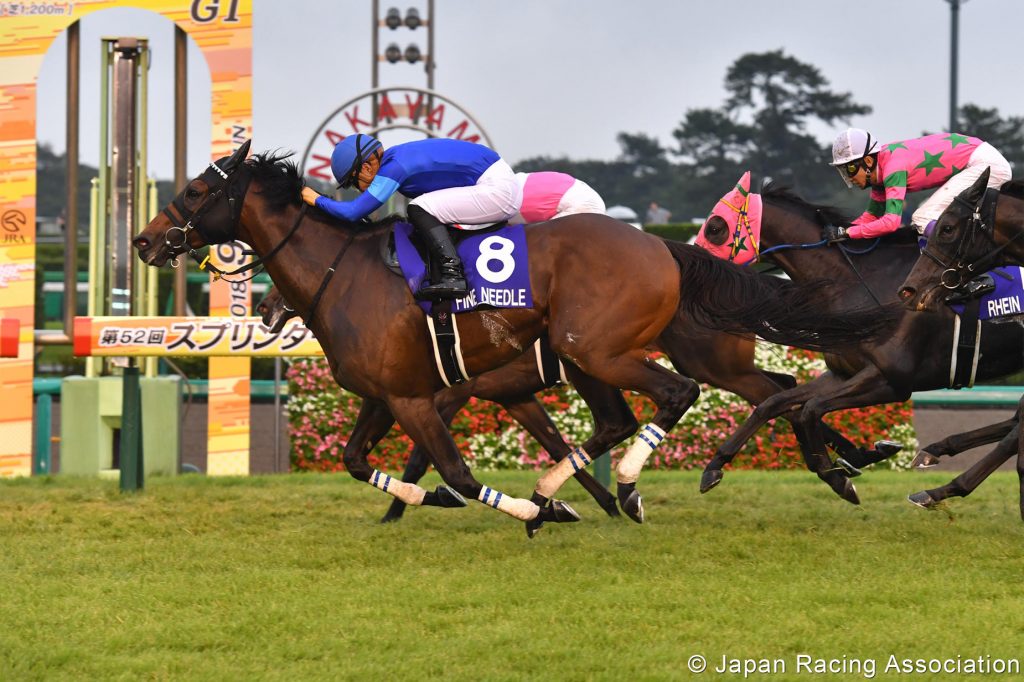 Fine Needle followed up his success in the Grade 1 Takamatsunomiya Kinen in March by battling to victory in the Sprinters Stakes (6f), in the process became the fifth horse to claim both elite level sprints in Japan in the same season.

Known for his trademark turn of foot, Fine Needle was unleashed by jockey Yuga Kawada and duly sauntered past his rivals to score by a neck from Love Kampf.

Having become the first top-level scorer in Japan for the Godolphin operation, a tilt at the Breeders’ Cup Turf Sprint could be on the cards for the son of Admire Moon.

Ryan Moore was back in America on Saturday to ride Mendelssohn for Aidan O’Brien in the Jockey Club Gold Cup (1m2f, dirt) at Belmont Park and though the son of Scat Daddy acquitted himself well, he could only finish third in the Grade 1 event.

Godolphin’s Thunder Snow, the Dubai World Cup winner who was back on dirt after a below-par effort in the Juddmonte International, looked to have every chance inside the final furlong but was nabbed near the line by 46-1 outsider Discreet Lover under Manny Franco, representing owner-trainer Uriah St Lewis.

The Grade 1 Joe Hirsch Turf Classic Stakes (1m4f) was run on soft going and those runners held up were unable to get into the contest. Channel Maker (English Channel), partnered by Jose Ortiz for Bill Mott, made every yard of the running and found extra in the straight to run out an easy winner, finishing four and a half lengths clear of Robert Bruce.

Teodoro, representing the Tom Dascombe stable, was pushed up to race prominently by Ryan Moore but weakened out of contention with two furlongs to run.

Accelerate has developed into one of the top older horses in North America and the son of Lookin At Lucky bagged his fourth top-level triumph in the Grade 1 Awesome Again Stakes (1m1f, dirt) at Santa Anita on Saturday.

Racing for trainer John Sadler and owners the Hronis brothers, Accelerate appeared to face only one serious rival in the shape of West Coast and duly dispatched Bob Baffert’s charge by two and a quarter lengths under Joel Rosario. The first two could meet again in the Breeders’ Cup Classic at Churchill Downs on November 4.

Remarkable filly Vasilika extended her winning run to seven in the Grade 1 Rodeo Drive Stakes (1m2f, turf) under Flavien Prat, getting the better of Paved by half a length.

Trainer and part-owner, Jerry Hollendorfer, confirmed that the daughter of Skipshot (Skip Away) would head for the Breeders’ Cup Filly and Mare Turf.

Simon Callaghan declared that Bellafina was the best filly he had trained after her victory in the Grade 1 Debutante Stakes on September 1 and that view was reinforced when the daughter of Quality Road sauntered home in the Grade 1 Chandelier Stakes (1m110yds, dirt) for two-year-old fillies.

Tracking the leader Vibrance, Flavien Prat asked Bellafina to put the race to bed rounding the home turn and the response was immediate, as she powered away down the straight to score by six and a half lengths.

The other Grade 1 juvenile contest on the card, the American Pharoah Stakes (1m110yds, dirt), also saw an impressive performance as the Bob Baffert-trained Game Winner proved far too good for Gunmetal Gray, asserting inside the final furlong to record a four and a half length success.

Jamie Osborne hopes to run Toast Of New York in November’s Breeders’ Cup Classic – a race in which he was an agonizing nose second to Bayern in 2104 – and the seven-year-old, now gelded following an unsuccessful stud career, took a further step towards that goal when finishing second to Mind Your Biscuits in the Grade 3 Lukas Classic Stakes at Churchill Downs (1m1f, dirt) on Saturday.

Six-time Grade 1 winner Abel Tasman was all the rage for the Grade 1 Zenyatta Stakes (1m110yds, dirt) at Santa Anita on Sunday but the odds-on favourite – 1-9 in the US betting – was slow to break and trailed home fifth of the six runners, jockey Mike Smith declaring that “she didn’t run, period” after her lacklustre effort.

Despite seeing his fancied runner fail to show up, Bob Baffert still emerged victorious as supposed second string Vale Dori, a six-year-old daughter of Asiatic Boy, captured the prize under Joe Talamo, seeing off the challenge of La Force and Drayden Van Dyke. 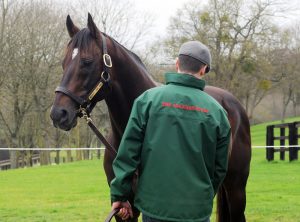