Smith on top in Classic
Stories

The three-time Cheltenham winner was quite simply a superstar

Five-time Grade 1 winning hurdler and chaser Vautour has died at the age of seven following a freak accident in a field at the Willie Mullins’ yard.

Mullins and his team were dealt a blow earlier in the afternoon as Hennessy prospect Avant Tout was put down after suffering a fatal injury in a Grade 3 chase at Naas. He was immediately pulled up by Paul Townend after jumping the first awkwardly.

With the Gigginstown withdrawal of horses a not so distant memory, the bad luck hasn’t let up for the Closutton team. A son of Robin Des Champs, Vautour was second favourite behind Thistlecrack for next year’s Timico Cheltenham Gold Cup.

“Vautour was out in a paddock with another of our horses, Shaneshill – the two of them go out to the same paddock most days,” said Mullins.

He continued: “We don’t know what exactly happened – it must have been a freak accident – but when one of the girls went out to feed the horses Vautour was found with a broken front leg and our vet had no option but to put him down.”

Vautour first burst into the spotlight in a maiden hurdle at Navan in December 2013. That day he strode out to win by an easy five and a half lengths in the hands of Ruby Walsh defeating subsequent Grade 1-winning hurdler Lieutenant Colonel.

He then went on take the Grade 1 Supreme Novices’ Hurdle at the Cheltenham Festival the following March. Mullins didn’t waste time in switching him to fences later that year.

Although encountering a blip on his second start over fences, Vautour went on to make all in the JLT Novices’ Chase at the Festival in 2015.

He was a hell of a horse, no doubt about it

Exactly 12 months later he followed up in the Ryanair Chase over the same two miles and a half, widely received as one of the most breathtaking jumping displays of the modern era.

Mr Ricci speaking to At The Races said: “He was a hell of a horse, no doubt about it.

“It’s just one of those freak things we don’t know what happened. We kept him outside this year because he’s a big, stuffy, gross type of horse. It’s sad and my heart really went out to Willie because it’s not an easy phone call to make.” 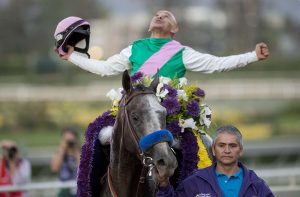 Up Next
Smith on top in Classic