The first lady of Liverpool
Stories

Up to the Mark

Sir Mark Prescott is closing in on 2,000 winners, not bad for a trainer who has never had, or wanted, more than 50 boxes

Pure. It’s the only word that aptly describes Sir Mark Prescott, Bt. Not exactly pure as the driven snow, but certainly driven. He is driven every day by purity of purpose, which allows him to sleep at night until he rises before dawn to confront a fresh wave of challenges.

It’s all there in the most revealing of several things he says about himself. “Fulfilment is quite a word,” he offers. “I try to find it every bloody day. Since I left school I have never gone to bed thinking I could have done more than I did that day. It’s not through lack of effort that I haven’t been more successful.”

Yet pure is too abstract a word to define a man who has entertained and enlightened a procession of patrons to his Heath House stables, at the base of Newmarket’s Warren Hill, for the last 45 years. In a curious twist, it is they who depart with the sense of fulfilment to which he so assiduously aspires.
It’s a purity the like of which you rarely encounter in others. It makes no concessions, least of all to tardiness or idleness, and while it is largely comprehensible, it requires on occasions a mental adjustment to see precisely where he is coming from. He is well aware of this: in these instances he explains himself with the meticulousness of a well-paid barrister.

Every horse is a project whose limitations determine the possibilities

One particular detail attests to his powers of oratory. Three successive heads of Animal Aid, which campaigned to ban Prescott’s beloved hare coursing, each came to recognise that the hare population was best controlled by the time-honoured practice that became illegal with the Hunting Act of 2004. Prescott was paramount to their conversion.

Nothing very much engages him unless it is pure, yet much about training horses holds him in thrall. Every horse is a project whose limitations determine the possibilities, but to Prescott, 67, the equine glass is always half-full. He still entertains hope when the glass is all but empty. Only when it runs dry does hope turn to despair. 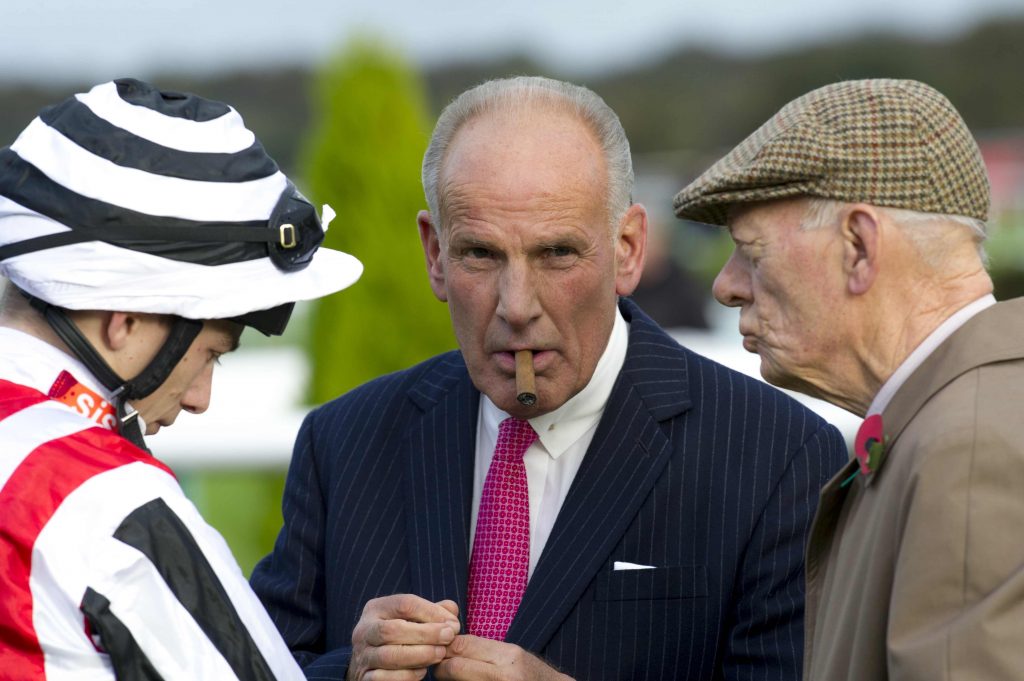 Despair is unambiguously on show as you accompany him on the round of evening stables. “This is a horse I have failed spectacularly,” he says as he runs his hand down a hind leg. There is no flippancy, no token acceptance of that failure. He is genuinely bollocking himself, admonishing his inability to win a race with a horse he feels should already have achieved its brackets.

The standard is so unrelenting it would be exhausting to live one day of his life, yet he wears the burden comfortably. Any owner who has sent him a horse – or more accurately, has been invited to do so – will attest to his patience. Prescott, in turn, has displayed the requisite stamina of a three-year-old winner of the Cesarewitch.

This is his 46th year from Heath House, which he took over in 1970, aged 21, on the death of Jack Waugh. He starts it with something of a rarity: he has a plausible 2,000 Guineas candidate in the shape of Celestial Path.
The colt serves to cast light of a different hue on his trainer. Prescott is so renowned for his perennial jousts with handicappers that he is quite reasonably pigeon-holed as a devotee of that quasi-intellectual game. His notable successes in that sphere make it all too easy to overlook the fact he is as ambitious as his most diehard colleagues.

Whatever the outcome on May 2, it will be a victory of sorts just to get Celestial Path to post. “He is owned by Mr Gordon Woodall, who is 84 and has had only one horse before,” Prescott says. “It is one of those lovely stories: Mr Woodall has already sold half of it, so he is out of trouble. We can afford to be brave and we both share a dream in that we’d very much like to win the 2,000 Guineas.”

Like any other Prescott-trained horse in a prestigious race, Celestial Path will not be there for the beer. He logged two easy wins, the second of them in Listed company, before he advanced to Group 1 competition in the Racing Post Trophy in October. The ground had gone by then, yet the son of Footstepsinthesand acquitted himself valiantly in finishing third.

“He works very well,” his trainer says, “although he probably wouldn’t quite be up to it unless the 2,000 Guineas is not as good [a renewal] as it should be. I believe he is entitled to run. He won’t need a prep race and he would love firm ground.”

Prescott has yet to train the winner of a British Classic, although Confidential Lady chased home Speciosa in the 1,000 Guineas nine years ago, before she went one better in the French equivalent. That record might have been embellished had Prescott responded differently when approached to train horses for Sheikh Mohammed more than two decades ago.

In a bid to overcome Prescott’s reluctance to extend Heath House’s capacity, the sheikh offered to build additional boxes on the side of the property adjacent to Warren Hill. “The big chance never comes to a lot of people in life, and that was my moment,” he reflects.

In the end, however, he declined it. “The sheikh wanted to send me between ten and 15 yearlings,” Prescott recalls. “The same number would have arrived the following year, so one owner would have been responsible for half my string.”
On the face of it, the decision does not sit squarely with Prescott’s assertion that races like the 2,000 Guineas and the Derby are the ones he covets most. The chances of that happening without such a patron are remote, despite the associated baggage. Did he not blink when opportunity looked him straight in the eye?

If you’ve given just one person that feeling [of unbridled joy], then maybe training one horse to go faster than another on the first Saturday in June is not so bad

“Not for one moment have I ever wondered what might have been,” he says. “I just thought, ‘I like my life the way it is.’ The thing about success is that the only person who can answer that question is the person concerned, because it depends entirely what you want out of life.

“For some people it’s about having children,” he continues. ”Others would never be happy unless they became champion trainer, but I love what I do. I can’t believe I keep getting away with it. It has been completely fulfilling for me, although I can’t think why.”

“These things can make a difference,” he continues. “Few people in life are in a position to do that. If you’ve given just one person that feeling [of unbridled joy], then maybe training one horse to go faster than another on the first Saturday in June is not so bad.”

These sentiments illustrate another dimension to Prescott that is easily submerged under the myriad of colourful stories about his formative years, each of which he tells in a torrent of anecdotes so redolent of an accomplished after-dinner speaker.

One thing common to every raconteur is their ability to place a sequence of events so completely in order that the pay-off line is greatly enhanced. It comes naturally to those of an ordered mind, as Prescott’s undoubtedly is, yet he has emphatically made a conscious decision to leave everything behind in a more enhanced state than he found it.

Evidence of this abounds from the moment you set foot inside Heath House Stables. This aspect has been faithfully documented by every visiting writer, yet as beautifully as the place fills the eye, the attention to detail is more arresting still. It is a place impossible to portray in words alone.

Suffice to say the horse does not come first, it comes foremost. Heath House is a functional thoroughbred shrine, worthy of preservation as a monument in defiance of the uglier side of time’s passage. Simultaneously, it is anything but antiquated.

Prescott’s consistently attractive numbers attest to that. It is almost routine for his annual haul of winners to exceed the stable’s 50-box capacity. He also keeps a close eye on his strike-rate. The fact his winners-to-runners ratio dipped last year to 16%, its lowest since 1988, has almost certainly helped stimulate his quick-fire start in 2015. His strike-rate at the time of writing exceeds 40%. All of which sees Prescott bearing down on the career landmark of saddling his 2,000th winner.

For all that, Prescott seems equally thrilled to have been asked to sit for a portrait commissioned by the Jockey Club that will hang in its historic Newmarket Rooms. “I was staggered and enormously proud,” he says before quickly digressing into the integral role he played in the introduction of scoping horses and the development of the starting stalls blanket. “They are the only two faintly useful things I have ever had anything to do with,” he says.

He maintains these advancements pale into insignificance when set against his admiration for Sir Alexander Fleming, who discovered antibiotics, yet they have obvious merit. Endoscopes and stalls blankets have become ubiquitous in the contemporary management of horses.

Prescott is almost prepared to concede the point in a less guarded moment. “When you come to tell The Almighty what you’ve spent your whole life doing, he’d probably say, ‘Well, I have Mother Teresa in here; what are you talking about?’ But if you’ve given a few people an experience they will never forget, and if you’ve educated a few pupils and assistants along the way, perhaps it’s not completely useless.” 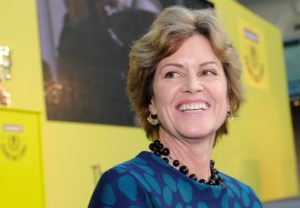 Up Next
The first lady of Liverpool