For Rebecca Curtis, the pleasure in training comes in creating the finished article from a raw recruit

Have you been around horses all your life, and what got you into training?

I started riding when I was four, went into showjumping and rode at international level for the Welsh junior team. Then I rode pointing. My first job in racing was just ten miles down the road with Peter Bowen.

When you decided to go down that path, how did you learn to become a trainer?

I went to the States for five years, where I worked for Richard Mandela and Dan Hendricks. I was very lucky that Dad had a big dairy farm with a lot of land which I could use for gallops. So I didn’t have to go out and find a training establishment.

I strongly believe that you should use your own initiative when you are training; that’s not to say I don’t have huge respect for Peter Bowen and the Americans. But it is important to adapt to your own facilities and use common sense as far as each individual horse is concerned.

What was your biggest concern when you set up in 2008?

I suppose for any new trainer the main concern is finance. Putting the right facilities in place is a big expense before being granted a licence. Of course, it’s difficult proving to people that you can train so you have to go and find a few horses to train for yourself. I was lucky because my friend, the Irish trainer Paul Nolan, let me have a couple of handicappers.

Also, on the first day I had runners there was a profile on me in the Racing Post and I was interviewed on the racing channels. That publicity got me a couple of owners and we went from there. It’s results that bring new owners and we’ve been lucky because my partner Gearoid has had nice young horses to sell and we’ve managed to sell to owners within the yard.

How many boxes did you start with, how many do you have now and what are your plans to expand?

I started with four and we have about 40 now. To be honest, I don’t want any more than 40. We have been very careful trying to select quality over quantity; there are a lot of nice young bumper type horses coming through. I like to be hands on myself and if we had many more horses I’d have to use more staff and I prefer things the way they are.

Your stables are situated on the Pembrokeshire coast, with your own private beach on the family farm, five miles from Fishguard. What are the pros and cons of being so remote?

The area here is very healthy for the horses, with lovely fresh sea air and a very relaxed environment with no one else training nearby. It is a lovely part of the country and our owners enjoy coming for a weekend, seeing horses and playing golf. Ffos Las is a nice new track which is only an hour from us and any travelling we do to other courses is worthwhile because we have so much going for us here.

Do you ever train horses on the beach ‘Red Rum’ style?

No. We use the sea for paddling the horses when they have heat in a leg, or a cut. We don’t work on the sand, though in the last two very severe winters when it has been difficult getting the horses out we have hacked them along the beach to keep them active. That’s a bonus.

With runners all round Britain, how do you cope with doing the miles?

You just get on with it. I’d never change where we live; you couldn’t find a nicer place to train. As for the travelling, it’s part of life as a trainer in Britain simply because the racecourses are so far flung.

How has your partner Gearoid Costelloe, from the well known Irish family that has produced numerous top jumpers, influenced your career?

Gearoid has brought a lot of nice young horses here, which has worked for both of us. He has supplied the horses, I have been lucky enough to get the results, which has enabled him to sell for good prices. Our two businesses work well together – the agent and the trainer. 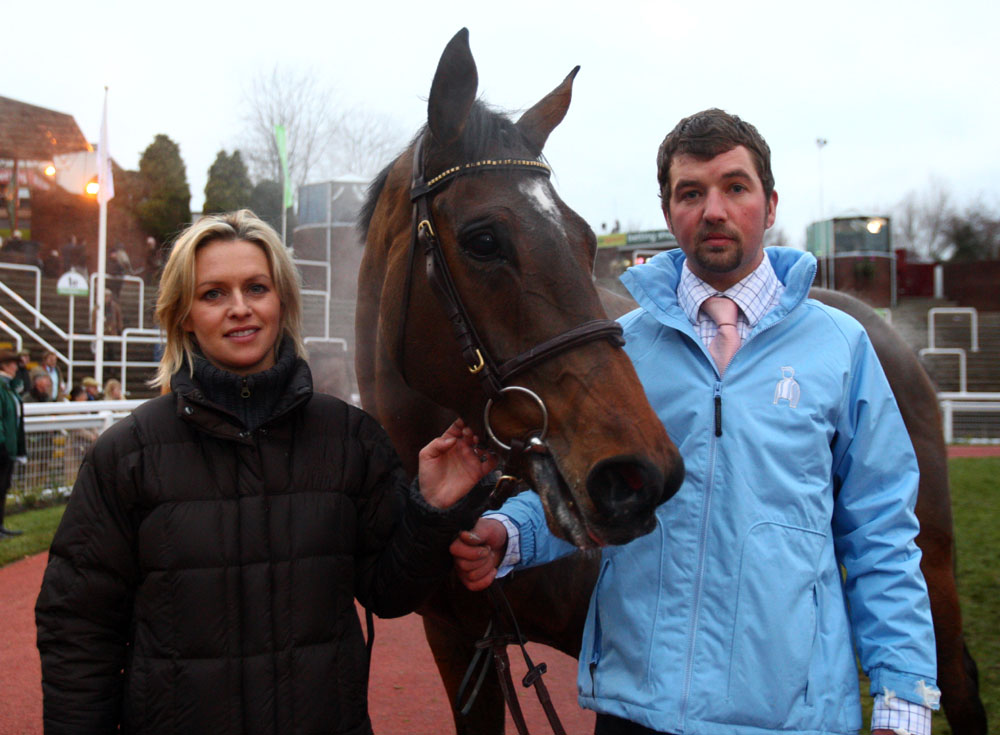 Rebecca Curtis with Teaforthree at Cheltenham

What led to you training horses for legendary owner JP McManus?

AP McCoy rides quite a few of ours and he happened to ride a nice bumper horse, Made In Time, which won impressively at Ffos Las. AP really liked the horse and suggested to JP McManus that he bought him and, luckily, he kept him in training with us. We had a few bumper winners which AP had ridden, and liked, and JP McManus bought some of those and now he has six with us.

Does training for such a high-profile owner bring added pressure?

JP McManus is one of the nicest and most reasonable owners you could train for. Of course you feel pressure because he is so high profile and you want to do well for him. He is not one of those people that rings up every day and hassles you. He is just very understanding.

The association brings you into professional contact with JP’s contracted jockey AP McCoy. What makes him stand out from the rest?

His dedication to the sport. I don’t think you’d meet a more dedicated man. He gives everything a ride, whether in a seller or the Gold Cup and always gives you such great feedback. He is so good with the young horses, knowing how good they are and where they should run next. He is a great help to me.

Peter Bowen, Evan Williams, Tim Vaughan and yourself make for a strong Welsh training contingent. Can you explain the sudden surge of talented horsemen and women in Wales?

Are you a supporter of the Horsemen’s Tariff? And is it working?

I am not going to pretend I know much about the detail. I am sent correspondence and e-mails from various racecourses telling me their prize-money will meet tariff levels. So they are definitely taking note and doing something about prize-money levels. That’s got to be good and you have to say the tariffs are a benefit.

Does the economy and general lack of finance in racing frighten you?

We keep being told the way the country is going and so you do worry what could be around the corner in a few years time. But then you go to some of the good sales and see the big prices being paid and you wonder if there really is a recession, or a crisis they are talking about. I suppose the answer is to keep your head down and keep producing winners.

What is your take on the new whip rules and the controversy they have whipped up?

They are ridiculous. The last thing a jockey wants to be concentrating on is how many times he can hit a horse. There is no discretion between a four-mile chase and five-furlong sprint – the rules are virtually the same. The new modern, cushioned whips don’t hurt a horse, they just keep it concentrating. It wouldn’t surprise me to see jockeys eventually taking drastic action.

How do you feel about the changes to the Grand National, which include increasing the minimum age of runners from six to seven?

I think it’s reasonable to change the age qualification because running a horse under seven in the National is a big ask. It is tough enough for a seasoned handicapper going round there and I think they’ve done the right thing keeping out the novicey types.

What is the worst part of being a trainer … and the best?

The best is doing something I love; getting up in the morning and training the horses. It’s so rewarding seeing young horses progress over the months and getting them ready to race. I enjoy taking on the untouched individual and developing it into the finished article.

The downside is that so much can go wrong with horses physically and, when their owners have invested in them, it’s not much fun telling them bad news. But, having said that, most of my owners are very understanding.

Who is your favourite horse and why?

Definitely Teaforthree who is a big old chaser by Oscar. He was quite a useful hurdler last winter and this is his first season novice chasing. You won’t see the best of him until he’s running in long distance handicaps next season, possibly the Welsh National and even the Grand National. I won a charity race on him at Ffos Las and that was a bit of fun. He is a real gent.

How tough is it being a woman in what is still principally a man’s world of racing?

I wouldn’t call it that tough, really. Look at Henrietta Knight, Venetia Williams and Emma Lavelle, and Jenny Pitman before them. They do as well as anyone else and people respect women in racing much more than they used to. It’s the results that count, no matter what sex you are.

You have an excellent strike-rate (32%) in bumpers. What’s the key to sourcing bumper winners and why is being able to win this type of race so important to your yard?

Gearoid and I try and choose them together, hopefully a nice quality horse, and if you can win with them then you have a decent horse to sell on. JP McManus has bought quite a few from us. When we started here there was nothing but green fields, now there are two gallops and new sheds, and most of that money has come from selling these young bumper horses.

When setting out with a bumper, you have a nice quality horse to bring on. We always take time with them; it can be between six months and a year and a half before they are ready. If they can win a bumper impressively you know you have a horse that should be able to go on and win hurdles and chases.

The Merry Giant ran in the race at Newbury marred by the deaths of two horses in the paddock. How do you reflect on the incident?

I wasn’t there and heard it all second hand. Of course, I was shocked and would have been even more devastated if I’d been there.

Teaforthree was leased by the football programme Soccer AM, advertising the sport to a new audience. How did you enjoy the experience, did it boost your profile, and is this something that racing should be doing more of?

Racing For Change actually leased Teaforthree, putting him in Soccer AM’s name as the owners, as part of the initiative to introduce sports-minded young people to racing. Every bit of advertising helps and we had fun when they came down here filming. The end result was a very nice documentary, but I can’t say it brought us any new owners.

It definitely helps from the public point of view and Racing For Change do try and advertise racing, though I believe it is a sport you’re either interested in or you’re not.

Can you give us two horses that you are really excited about for this season?

Peckhamecho, who won his novice hurdle at Ffos Las in November, is a chaser in the making but he will be kept hurdling this time. He needs to fill out but he is going the right way and hopefully we will have some fun with him. And the other must be my old favourite Teaforthree, who I really like the look of for this season. 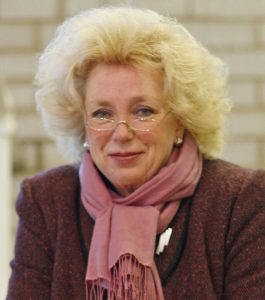 Up Next
New Chairman for TBA