Sale topper snapped up by Adam Driver of Global Equine Group for 120,000gns

A 120,000gns colt by Twilight Son, purchased by Adam Driver of Global Equine Group, was the highlight of the Somerville Yearling Sale at Tattersalls on Tuesday.

Formerly known as the Ascot Yearling Sale, the 2020 renewal was relocated to Park Paddocks owing to the Covid-19 pandemic and its success prompted Tattersalls to make the switch for good.

Aiming to offer buyers precocious yearlings, the 2020 sale has been advertised by the exploits of Windsor Castle Stakes scorer Chipotle, who was sourced by trainer Eve Johnson Houghton for just 10,000gns last year.

With the sun blaring down in Newmarket, it was during the early evening that 2021’s edition broke the six-figure barrier when Petches Farm’s offering took his turn in the ring.

The colt is the out of the Listed-winning Bahamian Bounty mare Baileys Jubilee, the dam of winners Nigel Nott and Baileys Breathless.

Petches Farm is owned by Paul Venner, Managing Director of Baileys Horse Feeds, and his son Simon, the company’s Sales Director, said: “We weren’t quite expecting to that level; we were very hopeful as we knew we were bringing a nice individual to the sale. All the right people were on him.

“He has always been quite an eye-catcher, very strong and straightforward, and he has not taken too much work. He has been flat out since getting here.

“He showed himself off greatly, I think he owned this runway in the Further Yard, he caught a few eyes. He had a few vettings; it is nice when it works out.”

The sale topper nearly didn’t get to Newmarket as the lorry containing the Petches Farm yearlings was involved in a crash on the way to the venue.

Petches Stud Manager Ollie Costello continued the story and said: “The lorry was run off the road, it is a write off. I rang Keith Harte, whose farm is only five minutes away, he jumped in his own lorry and came out to us – he was with us really quickly.

“Both behaved impeccably and swapped over on the road. Thank god everyone involved and the horses were all ok, and today’s result is fantastic – I am so pleased for all the team.”

Driver, who was acting on behalf of an existing client, added: “We will get him back to Jo Fenton’s and she will work her magic, break him in and get him backed. He is a strong solid horse, so we will see what he shapes up into.

Prior to the sale topper, trade had been headed by an 85,000gns filly who underlined the appeal of her sire Ardad.

This filly, a homebred for Scarlett Knipe’s Cobhall Court Stud, was the headline act of six on offer by Overbury Stud’s first-season sire, and she was duly snapped up by Robson Aguiar for Amo Racing.

Out of the winning Lujain mare Sparkling Eyes, she is a half-sister to the winning quartet Pea Shooter, Wimpole Hall, Blurred Vision and Golden Iris.

Knipe said: “We sell foals mainly – I am going home now to do 11 foals that will be here in December!

🗣️ “This filly was never really in the box here and she has been as good as gold; a joy to deal with.”

“This filly was never really in the box here, and she has been as good as gold, a joy to deal with. The dam is in foal to Havana Grey and she had a colt foal by Tasleet.

“I like to go for good-looking sires, ones that I hope are going to come out straight and correct. I bought her [Sparkling Eyes] in foal carrying Pea Shooter, but she is getting older now.”

Aguiar, who had earlier in the session secured a 75,000gns Tasleet filly, said: “I bought a few by Ardad last year and I breezed Perfect Power and Ardad himself. This sale is a good investment as I pay the price they are worth, and if they are good you can sell them on.

“I also purchased Lot 112, a Cityscape filly, she is very athletic, she is a nice filly, I like the way she walked and the way she behaved.

“I am happy with my purchases – I don’t mind if I buy fillies or colts, I like to buy horses that I think will be good racehorses. I look at everything in the catalogue and make a shortlist of five or six and try to buy them.”

The first yearling colt by Juddmonte’s Expert Eye to sell at Park Paddocks went the way of Freddy Tylicki, Smarden Thoroughbreds and Steve Bradley for 80,000gns.

Offered by Kilminfoyle House Stud, the colt is a half-brother to the Grade 3 performer Cay Dancer and the Listed-winning Dynamic and is out of the winning Dalakhani mare White Cay, herself a half-sister to Coronation Stakes heroine Balisada.

The colt’s page received an update earlier this year as Cay Dancer is the dam of Gleneagles colt Highland Rocker, who has won twice as a three-year-old for his trainers John and Thady Gosden.

Tylicki said: “I loved him, I thought he was the pick of the sale, I am very taken as to how well Expert Eye is throwing them. This is for a client, and we were very keen on this lad. There is a lovely update on the page as well and this horse has it all going for him.

“No trainer is planned yet, we will chat and make plans. This is the one we wanted and we’ve got him so we are delighted. He has a lovely physique, great walk to him, plenty of presence, very good eye to him. He ticked a lot of the boxes – probably all of them!”

Canice Farrell’s Knockatrina House Stud had a lovely result in the ring when her Kodiac filly out of the Unfuwain mare Sahool sold for 70,000gns to agent Roger Marley and trainer Kevin Ryan.

Farrell had purchased the Listed-winning mare for just 4,500gns at the Tattersalls December Mares Sale in 2016 prior to the mare’s Pivotal colt, Laraaib, winning the Group 3 Cumberland Lodge Stakes in 2018.

While Sahool’s Kodiac filly was unsold as a foal, the sum on Tuesday rewarded Farrell’s faith in both the mare and yearling.

She said: “I have kept a daughter [of Sahool] and she is in foal to Kodiac. This is a phenomenal filly, she has got a great mind, she is a lovely athletic filly and I like her a lot. She had 100-plus shows.

“We’ve had a lot of good horses over the years, three or four Group 1 winners, but I really think she will be a Royal Ascot filly, she is a real racehorse. I have sold one or two to Kevin [Ryan] in the past, I hope she is lucky for him.

“I thought she might get a bit lost in Book 2, but she is in the top ten per cent here. The man who has done all the work with her is Brendan Cooney.”

Marley added: “She is for an existing client in the yard. Kodiac needs no introduction, and she has a great pedigree, we will see what happens.”

Another to make 70,000gns was Galloway Stud’s Zoustar filly out of the Oasis Dream mare Cordial who was bought by MC Bloodstock.

Stuart Thom of Galloway Stud said: “She’s a homebred. The dam went to Ireland, but unfortunately she died last year.

“The team at home has done a fantastic job with her, she looked fantastic and never put a foot wrong the whole sale. We usually have about a dozen through the yearling sales, so we’ve ones coming up for Book 2, Book 3 and December. This is a very good start to a long season!

“We were always hoping she would make a good price and that is slightly over what we’d thought so I am delighted. She had 150 shows so she’s been walked off her feet and I’ve done a few steps as well!

“We consigned at this sale last year when it moved to Newmarket and it has been really successful. Tattersalls have done a marvellous job, the quality of the catalogue is just fantastic.”

Clive Cox is very familiar with the family of Ballyphilip Stud’s Starspangledbanner filly out of the winning Kodiac mare Our Joy, having trained Harry Angel, Supremacy and Xtension, who all feature on her page.

Cox, who went to 50,000gns to secure the yearling, said: “It is a family that has been extremely successful for us, there are many fond memories all the way down the page really.

“This filly is a lovely filly – she has a very athletic walk, a very strong hip, there are a lot of similarities to the family, and I am delighted to get her. She does not have an owner as of yet.”

Paul McCartan of Ballyphilip Stud added: “She is a very nice individual. We picked this sale so that she would be a bit of a stand-out. It is a sale that is on an upward curve, it qualifies her for two races which is a plus, and any sale in Newmarket is fine by me!

“Our next sale here is the Fairyhouse Sale that is taking place here, and then we have a nice draft for Book 1, 2 and 3 – the headline act will hopefully be the full-brother to Battaash. He is a gorgeous horse.” 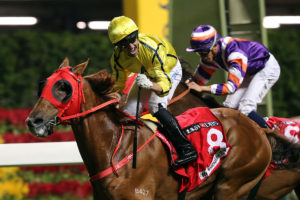 Up Next
The Finish Line with Neil Callan