Turner the star of a burgeoning cast

Hayley Turner and her first Group 1 winner Dream Ahead

When seasoned observers watch a race featuring Hayley Turner, the phrase most often heard to describe her in action is that she “rides just like a man”.

This may seem like the last thing an attractive young woman would want to hear, but it’s almost certainly music to Turner’s ears.

For decades, ever since Meriel Tufnell became the first woman to win a race under rules, on Scorched Earth at Kempton in 1972, women riders have fought hard to be taken seriously by trainers and owners, and to be given chances so readily afforded to their male counterparts.

Julie Krone, Chantal Sutherland, Emma Jayne Wilson, Lisa Cropp, Rosie Myers, Sam Spratt, Maree Lyndon, Michelle Payne and Clare Lindop have all ridden Group or Grade 1 winners in America, Canada, New Zealand or Australia; but in Britain, only Alex Greaves had achieved that status, and even then she had to share it, when Ya Malak dead-heated with Coastal Bluff in the Nunthorpe Stakes of 1997. Hayley Turner became the first female jockey to win a Group 1 race outright in Britain when guiding Dream Ahead home under a hands-and-heels ride in Saturday’s Darley July Cup.

Turner’s not alone in being a widely accepted member of the female section of the weighing-room. Her Irish colleague Cathy Gannon currently sits three wins ahead of her in the jockeys’ championship and the friends and rivals were both champion apprentice in their respective native countries.

Kirsty Milczarek, a former top junior show jumper, is another to receive plenty of credit, while Amy Ryan, Julie Burke and Lucy Barry are highly promising apprentices among a growing army of female riders.

In the same week that Turner rode her first Group I winner, 17-year-old seven-pound claimer Hannah Nunn rode the first winner of her fledgling career. She had scored another notable benchmark when becoming the first girl ever to graduate from the British Racing School’s apprentice course having beaten the boys in the gruelling fitness test.

The message is clear. The girls are taking their responsibilities towards race-riding very seriously indeed, and finally they are being taken seriously by fellow racing professionals. 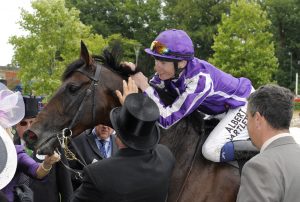 Up Next
Cape of good hope