Only 251 days on from retiring from the jockey ranks, Hayley Turner – the first female jockey to break a century of winners in a season – took three rides on Newmarket’s evening card, on the road to yet another appearance at the Dubai Duty Free Shergar Cup in the first week of August.

Turner made the decision to take a few rides in the weeks leading up to the Shergar Cup, to gain that race fitness edge.

She lifted the Shergar Cup last year alongside the Girl’s captain Emma-Jayne Wilson and Sammy Jo Bell and is bidding for a repeat performance this time around.

The Nottingham-born jockey has still been riding out and hits the gym on a regular basis, with uphill sprints a prominent feature of her workouts.

She made her first appearance of the evening aboard Yankee Mail, a four-year-old filly trained by Gay Kelleway and took her time in the last pairing.

The duo couldn’t get competitive in what turned out to be a messy race, finishing a well beaten fifth behind the Ed Vaughan-trained Cold Fusion. The winner turned out to be a poignant one, considering one of the best female jockeys currently on the circuit was on board Josephine Gordon, who herself has already hit the 39 winner mark for the season.

Her remaining two rides couldn’t provide a fairy-tale win, in what she has described as a brief comeback. Her mount in the maiden fillies stakes, the Marco Botti-trained Clenymistra, was prominent early on but faded to finish unplaced, while He’s My Boy finished a close enough third in the concluding handicap for local trainer James Fanshawe.

Since exiting the saddle, Turner has worked as a pundit on Attheraces this season and has been well received by the racing community.

“I didn’t know what to expect and whether I’m fitter than I may have thought,” reflected Turner.

“As I feel at the moment, I’m just delighted to come back for the Shergar Cup, it’s such a fun event and I’m really excited about it.”

As the most successful female jockey of all time, Turner scaled the heights when landing two Group 1’s in sprint races, both only months apart in 2011.

The first came aboard Dream Ahead in the Darley July Cup for trainer David Simcock, the pair getting up to claim the contest by a narrow margin. The second was in the Nunthorpe Stakes for Michael Bell who took Turner on during her early days as an apprentice. On the day their three-year-old filly Margot Did triumphed in gutsy fashion to land the honours by just under a length.

The heroine retired from the jockey ranks at the end of last season having secured 43 winners, and was included in this years Queen’s Birthday Honours List, receiving an OBE for her services to racing.

She takes the place of Melbourne Cup-winning jockey Michelle Payne and will be joined again by captain Emma-Jayne Wilson and Cathy Gannon. 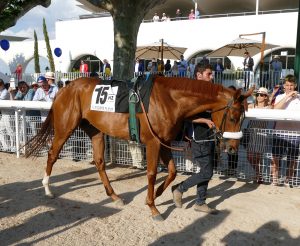 Up Next
Europe's cheapest Classic winner