A new name was etched onto the Goodwood Cup roll of honour as Trueshan took advantage of Stradivarius’ late defection to capture the Group 1 at the Qatar Goodwood Festival on Tuesday.

Backed into favouritism, Trueshan raced keenly for much of the two-mile event but was moved to the stands’ side rail by jockey Hollie Doyle and soon kicked clear from closest pursuer Away He Goes. Sir Ron Priestley finished third.

It was a performance that sealed a first top-level success on the Flat for trainer Alan King and a second win at the highest level for Doyle, who had notched her first on Glen Shiel in the QIPCO British Champions Sprint Stakes at Ascot in October.

King said: “Group 1-winning trainer sounds very good and this is a very special moment. I was calm all morning and then Stradivarius was pulled out and we got shorter and shorter – that’s when the nerves kicked in. I hadn’t been that nervous for a long time.

“I haven’t really been coming racing much over the last 18 months and I don’t think I’ve actually ever saddled this horse to win. He was a little bit keen which he can be but I’m happy we went to the Northumberland Plate now.

“If we hadn’t run him there and come straight from Chester he could have been ferocious today. We were able to let him down for two weeks and then build him back up.

“This is right up there with the Champion Hurdle wins and things like that. All I want to do is train proper horses, I don’t mind if they are jumpers or not.”

A very warm welcome from the crowd at Goodwood, for @HollieDoyle1 as she takes the win on Trueshan for Alan King in The Al Shaqab Goodwood Cup Stakes, becoming the first female jockey to win the prestigious race! 🏆 #QGF pic.twitter.com/FLarIQuFwE

Doyle added: “He’s a superstar on this ground. We weren’t going very quick early on and he was a little keen but I just let him slide up on to the girth of the leader and he took up the bridle on me.

“The further he went the better and he found another gear. Full credit to Alan and everyone who looks after him and thanks to the owners who have kept a bit of faith in me.

“It’s been on my mind every day since Champions Day about when we could get back together in a big race like this. These are the days you do it for.”

There was simply no stopping Doyle as she sealed a treble on Tuesday’s card when guiding Lord Riddiford and Sisters In The Sky to victory.

Lord Riddiford’s triumph followed immediately after her Group 1 success and the gelding’s two and a half length victory in the five-furlong handicap saw the six-year-old lead home his John Quinn-trained stablemate El Astronaute.

The treble was sealed when Doyle struck aboard the Roger Teal-trained Sisters In The Sky in the six-furlong maiden stakes.

Reflecting on the day, Doyle said: “It’s been an amazing day and brilliant to win on this colt [Sisters In The Sky] for Roger. He settled a lot better today, and after hitting a flat spot saw it out well. I just needed to give him one behind the saddle and he was away.”

Beckett and Chan at the double

Just three days after finishing second in the Listed Pat Eddery Stakes at Ascot, Angel Bleu made the most of returning quickly when the two-year-old emerged victorious in the Group 2 Vintage Stakes.

Partnered by Frankie Dettori, just like he had been at Ascot on Saturday, Angel Bleu was clearly well in himself as he raced freely for much of the contest before being asked by his jockey to make his move in the final stages.

Despite hanging right when taking the lead and interfering with The Acropolis, the only challenge came from the Andrew Balding-trained Berkshire Shadow who was beginning to flash home late under Oisin Murphy.

But Berskhire Shadow’s challenge came far too late as Angel Bleu secured victory by three-quarters of a length, with a further length back to Austrian Theory in third.

Angel Bleu’s trainer, Ralph Beckett, speaking to Racing TV afterwards, said: “Frankie got off him on Saturday and said, ‘he’s been busy, give him a break’, so I thought we should leave him alone.

“I fed him on Sunday and I looked at him sideways and thought ‘you don’t look like you’ve had a hard race to me at all’.

“I jogged him up and he bounced up the yard, [owner] Marc Chan’s racing manager called me up and said ‘why don’t we geld him now and send him to Hong Kong in the autumn, he can go there and have a good time’ – he was a little surprised when it rained, and we decided to declare him! 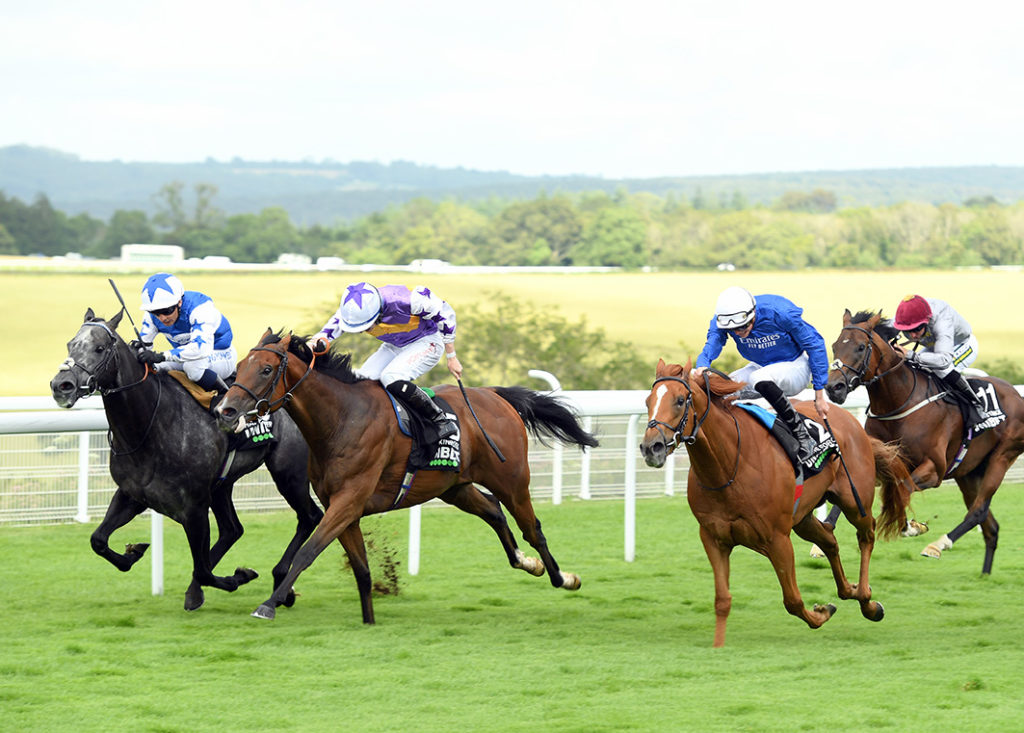 “If we hadn’t declared and the field had fallen apart like this, I’d have been really, really cross with myself. With the rain last night, I could hardly believe my luck! He likes a bit of juice, and he likes soft ground, we’ll think about the Dewhurst now I should think.”

The afternoon got better for Beckett and owner Marc Chan as immediately after Angel Bleu’s success they were in the winner’s enclosure at Goodwood again when Kinross was a determined winner of the Group 2 Lennox Stakes.

Beckett added: “He shot through the gap two [furlongs] down and he sort of floated home in the last furlong. I was really keen that Rossa [Ryan] rode him absolutely cold today, and it’s panned out perfectly – as it can do sometimes.

“I was a bit worried he was getting into a row with Danny Tudhope at the top of the hill – I thought we were going to be shoved down on the fence, but it opened up and all was well.

“He’s not been difficult to train – he’s just been a difficult horse to read. I felt last year that I was always trying to get him ready, but I didn’t bother getting him ready for Kempton [last November] – I just got him there in reasonable shape when he won the Hyde Stakes.

“Taking him to Dubai [then] seemed like a good decision at the time – but that didn’t work. He was enjoying himself too much, enjoying his holidays – so gelding him was a good idea and sticking to this ground was a good idea.

“The form book doesn’t lie – his mother was very good on soft ground, and we’ll be sticking to good or soft from now on. He’ll definitely go up in grade. He’s in the [Prix] Maurice de Gheest, and the [Prix de la] Foret is a race I’ve always thought would suit him – so I think we’ll work back from that.”

Buick on the board

Jockey William Buick bookended Tuesday’s card having struck aboard the David Menuisier-trained Migration in the opening Chesterfield Cup and ending the day with victory on the Hugo Palmer-trained Lovely Breeze.

The mile fillies’ handicap went the way of Shadwell Estate’s Anghaam, trained by Richard Hannon and ridden by Jim Crowley. 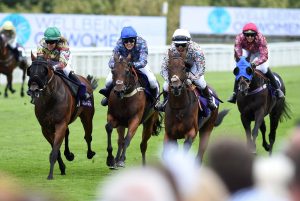 Up Next
Riding A Dream Attendees selected