Just what the Doctor ordered
Stories

Trio off the mark in freshman race

Zebedee bounces into the lead, hotly pursued by Showcasing and Arcano

The Richard Hannon-trained Magical Roundabout not only became the first winner for Zebedee on April 7, but he emulated his sire by winning the same five-furlong Windsor maiden in the colours of Zebedee’s former owner, Julie Wood.

Bred by Oliver Donlon, the grey colt is out of the Soviet Lad mare Chimere, who was Listed-placed in France as a two-year-old, and he was bought by Wood at the Goffs Foal Sale for €20,000.

Zebedee, who stands in Ireland at Tally Ho Stud, has also been the best represented of the first-season sires, with nine starters already on the board, including Wolverhampton runner-up Zermintrudee.

Fast Company has also had a good smattering of runners to date but his eight performers have yet to finish in the money, while Showcasing was the second freshman to record a winner when Abscent Friends made virtually all the running to win at Southwell for Bill Turner on April 8.

The offspring of Arcano, who, like Showcasing, is a son of Oasis Dream, found plenty of favour with buyers at last year’s yearling sales and the Derrinstown resident made the perfect start with his first runner, Ksab, who took the opening race of Newbury’s Greenham meeting for Sheikh Hamdan and John Gosden.

Looking professional on debut, Ksab, who was bred by Ballylinch Stud’s John O’Connor, is out of Nell Gwyn Stakes runner-up Cape Columbine, a half-sister to the top-class sprinter Cape Of Good Hope. 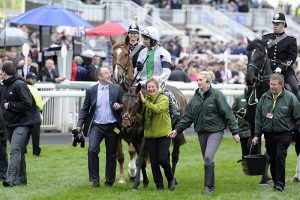 Up Next
Just what the Doctor ordered