Having beaten the snow after a Herculean effort from its team of groundstaff, Cheltenham’s ‘Festival Trials Day’ was always going to be that bit extra special, and when the 12-year-old former Gold Cup winner Imperial Commander galloped round the home bend in the lead after a 680-day absence it seemed as if the stage was set for the perfect feel-good story.

As it was, a late rally from the smaller, younger Cape Tribulation, under a relentless drive from Denis O’Regan, denied Imperial Commander a famous comeback victory in the Argento Chase by just half a length, but his many fans roared him back to the winner’s enclosure almost in denial of this narrow defeat, their cheers reinforcing the depth of passion behind National Hunt racing and its true stars, the horses.

Nigel Twiston-Davies, who has coached Imperial Commander to six victories at Cheltenham, including a seven-length trouncing of the great Denman in the 2010 Gold Cup, declared himself delighted with the son of Flemensfirth, who was last seen in battle when attempting to defend his Gold Cup crown the following year. He was not only pulled up lame but was also found to have bled and thus missed the entire 2011/12 jumps season. A third attempt at steeplechasing’s blue riband is now his aim, and he is also likely to be given a Grand National entry.

Cape Tribulation will also now be aimed at the Gold Cup but he is already on the Cheltenham Festival roll of honour, having won last year’s Pertemps Final. He formed one half of an impressive double-double for trainer Malcolm Jefferson, who also sent out Attaglance to win the Martin Pipe Conditional Jockeys’ Handicap Hurde at the Festival, and both horses went on to win again at the Grand National meeting less than a month later.

Imperial Commander’s gallant second was followed up for Twiston-Davies by the frustration of seeing another of his representatives caught in the closing stages, when odds-on favourite The New One was headed by At Fishers Cross in the Neptune Investment Management Novices’ Hurdle.

In a day of tight finishes, another pair to be separated by just a neck after galloping and jumping for three miles in the heavy going were potential World Hurdle contenders Reve De Sivola and Oscar Whisky, who filled the quinella in the Cleeve Hurdle with the gallant Kentford Grey Lady earning valuable black type in third.

By far the most impressive performance of the day, however, was given by Sprinter Scare, who coasted home for a facile victory in the Victor Chandler Chase, never once coming off the bridle.

The top-rated jumps horse in training is already being dubbed the Frankel of National Hunt racing and from the manner of his wins it is easy to see why – his last three victories have come at distances of 13 lengths, 15 lengths and 14 lengths respectively.

He has, however, suffered two defeats, but has never finished out of the first three in 13 lifetime starts, with his last four victories all being at Grade 1 level. With Kauto Star retired, this beautiful dark brown son of Network, just seven, is now the undisputed king of the chasing ranks. 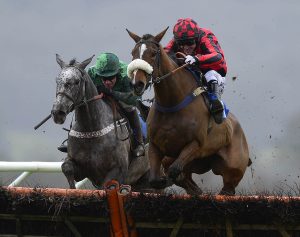