The trial of new race start procedures for jumps racing has been extended to the end of the 2020-21 National Hunt season, the British Horseracing Authority and Professional Jockeys Association confirmed on Friday.

Originally due to run from October 5 until December 31, the trial involves changes to the start race procedures where if there is an initial false start in any jump race, runners will be allowed another attempt at lining up and approaching the tapes at a walk/jig-jog. This is instead of reverting to a standing start, unless they do not go back as far as instructed.

If the second attempt at starting the race also results in a false start, then the third attempt will be made by a standing start.

Data collected in the initial trial period revealed that no rule breaches were committed in relation to the start by jockeys during the trial and that in all of the cases a walk-in start was successful second time round. No standing starts were required during the three months.

Both the BHA and PJA have now agreed that the trial should be extended to the end of the 2020-21 jumps season to cover the major spring festivals so more data can be collected. 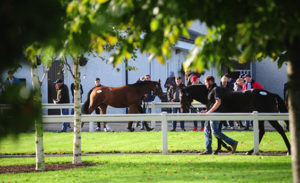 Up Next
Tattersalls Ireland to sponsor Grade 1 Spring Juvenile Hurdle