By The Owner Breeder staff 08 September 2013

Top Notch Tonto took a step into the unknown on Saturday when lining up in Pattern company for the first time, but the three-year-old gelding proved that he was equal to the challenge when running out the two-and-a-quarter length winner of the Group 3 Superior Mile at Haydock.

The chestnut, whose proliferation of white markings on his legs and face presumably earned him his wild-west name, became the first stakes winner for Thousand Words, a Group 3-winning son of Dansili, who retired to Rathasker Stud in Ireland in 2009. A member of his sire’s first crop, Top Notch Tonto was offered by Rathasker at Tattesalls Ireland’s September Yearling Sale where he was sold to trainer Ian McInnes for €3,000.

Following McInnes’ disqualification from racing earlier this year after a horse in his care was found to have raced after undergoing de-nerving surgery, Top Notch Tonto was one of a number of horses moved to the yard of Brian Ellison by owner Keith Brown. A winner twice last year, the popular gelding has also now won twice from just three starts for his new trainer, while Brown’s Dream Walker, also now with Ellison, notched a hat-trick of wins in just ten days following his move.

Bred by Seamus Finucane, Top Notch Tonto is out of the Moment Of Hope mare Elite Hope, who won 11 of her 60 starts for the Elite Racing Club. Her final came at the age of eight and she won at least once in each of her seasons of racing bar her three-year-old year. 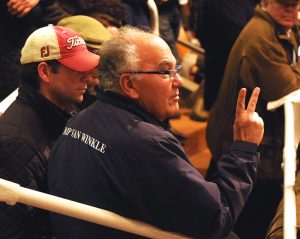 Up Next
Paulyn dispersal a major boost for Goffs