Tom Symonds on his best ever season and Festival hopes

Song For Someone is apparently quite happy singing to himself as he walks back down the gallop under his trainer Tom Symonds.

The six-year-old can’t croon as we know it, yet he exudes an air of happiness in his own world, one that is full of coquettish little idiosyncrasies, which his trainer takes delight in understanding. “I find it interesting . . .” is a stock phrase for Symonds, who started training in 2011 and has comfortably passed his personal best total of winners and prize-money this season.

He lives at Dason Court near Ross-on-Wye in Herefordshire with his wife Elsa, who is a daughter of trainer Bob Buckler and has a hands-on role across all aspects of the business. The couple are parents to two-year-old son Albert.

Getting to know horses and their likes and dislikes is part of the pleasure of training for Symonds, and if Song For Someone has a whim it is indulged.

A dual Grade 2 winner over hurdles this season, the gelding’s Unibet Champion Hurdle prospects were dealt a blow when comfortably beaten by Goshen in Wincanton’s Kingwell Hurdle, yet his owners and trainer have not written off a rematch with that rival at the Cheltenham Festival.

Reflecting on the Wincanton run, Symonds says: “He ran alright, and Cheltenham on better ground might suit him better. He was giving Goshen 6lb and he finished 19 lengths ahead of [third-placed] Navajo Pass who was rated 156, so it wasn’t such a bad run. 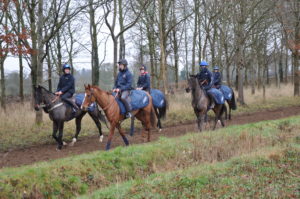 “Aidan [Coleman] let him come home in his own time once it was clear he was going to finish second, so we’re down but not out. It’s a possibility that we fit cheekpieces next time just to get him travelling earlier in a race.”

Song For Someone won over hurdles in France as a three-year-old, but went back to basics after being bought by Sir Peter and Lady Gibbings and sent to Dason Court. Promising efforts at Ludlow and Fakenham were followed by a win at Newbury, then last season he took a big stride forward with a win in the Kingwell Hurdle.

In November his seasonal debut resulted in victory in the Grade 2 Coral Hurdle at Ascot, followed soon after by a first visit to Cheltenham and a nose victory over Silver Streak in the Grade 2 International Hurdle. After Silver Streak ran away from reigning champion Epatante in Kempton’s Grade 1 Christmas Hurdle, Song For Someone’s place in hurdling’s most exalted race did not look optimistic.

Of the victory over Silver Streak, Symonds says: “It was tight, but we gave him a couple of pounds and beat him. I looked at the race as one with good older horses and our younger progressive horse. He has gained his rating in a progressive way, rather than one who has definitely peaked.”

“He’s a funny horse that you have to humour. Sometimes I start him at the back of the string and let him pass the others and he loves it”

Assessing his star performer’s character, Symonds says: “He’s a funny horse that you have to humour. Sometimes I start him at the back of the string and let him pass the others and he loves it.

“We don’t work him a lot because he’s the type of horse that would go backward, and we don’t school him a lot or with other horses because I wouldn’t want to put them under such pressure. He’s the fastest horse I’ve seen over a hurdle since Binocular [the 2010 Champion Hurdle winner].”

Symonds saw a lot of Binocular and a number of other high-class horses during a six-year stint as assistant to Nicky Henderson.

Not a Plumpton horse
Back at the yard Symonds gives Song For Someone a nibble of grass before taking him to his stable for a quick sponge off around the saddle and legs. The trainer has perfected the body swerve that keeps him and his clothing just out of reach as the chestnut swings his head back for a nip.

“You’re a grumpy sod sometimes,” says Symonds, patting the horse and then heading for the door, saying: “He’s about to roll, so get out of his way. If people get in my way in the morning I’m also grumpy.

“I don’t like to anthropomorphise horses too much, but they like a routine. We know some horses benefit from a change, but for others if you change something they worry about what’s going on.”

Bred in Germany but conceived at Newmarket’s Cheveley Park Stud in a mating between Medicean and the Danehill Dancer mare Sweni Hill, Song For Someone was bought in France. Symonds says: “We heard he was for sale through the agents Claude Charlet and Joffrey Huet, so I drove down to Joel Boisnard’s yard near Senonnes.

“I like to see where a horse is stabled, the environment they are living in and the health of them. The horse had shown in races that he could get across a hurdle really impressively, but French hurdles are different from ours.

“What is so lovely is that Sir Peter and Louise don’t expect anything – they just hope. So many owners expect so much. They all want a Cheltenham horse, and so do we, but realistically you are more likely to buy a Plumpton horse. Cheltenham horses are made, not bought.” 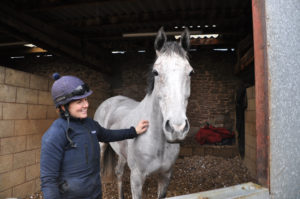 Several multiple winners have emerged from Dason Court this season, including Mr Washington and Innisfree Lad who both won four races, although the last-named horse has since left the yard.

Llandinabo Lad is a dual winner whose rating of 141 is second only to that of Song For Someone. Symonds says: “He was bred by my father, Peter, and is owned by Celia and Michael Baker who live just up the road. I don’t know what went wrong [in a Grade 2 hurdle] at Haydock [when last of five], but he has already done far more than we could ever have imagined. He went there as favourite so we were right to try it, but perhaps he had a harder race than we realised on his previous start.”

Symonds says one or two other possible runners in handicaps at Cheltenham have run out of time, with the very wet winter and abandoned meetings proving unhelpful. He says: “Table Mountain is a nice young horse [rated 91 on the Flat] who was third on her first hurdling start at Kempton then fourth at Hereford. She has a future over longer distances.

“Hystery Bere was second at Sandown then scored easily at Fontwell after coming here from France and will make a lovely chaser, while Moriko De Vassy and Hidor De Bersy were both showing the right signs before winning their bumpers first time out. They’ll be put away now until next season and are really exciting horses.”

A brief encounter
While every yard experiences horses and staff members coming and going, a recent stay at Dason Court by former trainer David Dennis was successful but short-lived.

In midsummer last year, Dennis moved from a yard in Worcestershire with a group of some 16 horses that were to be trained under Symonds’ licence. In hindsight it could be said that a number were fortuitously handicapped, but winners flowed, reflecting well on Tom and Elsa, their staff and facilities, and also on Dennis and his supportive owners.

However, in January the association ended when Dennis moved again, taking all but one horse to the yard run by Matt Sheppard.

Dennis explains: “There was no falling out and I enjoyed my time at Dason Court. I approached Tom but was keen to continue my involvement with the horses under my care. I knew their history, what they were capable of, and the results we achieved were very good.

“[By January] I felt the time was right to move on and wanted to stay in the area because my daughter is at school locally. I’ve known Matt and Nicki Sheppard a long time, asked if they had room for the horses and they said yes.”

Asked to summarise the situation, Symonds says: “He wanted to come, he wanted to go. It’s as simple as that. There was no falling out, he just decided he wanted to leave. The haste was strange and the staff here were sad to see some lovely horses go.”

Symonds may now have some boxes to fill at Dason Court, but the winners and placed horses keep coming and should ensure they don’t stay empty for long. 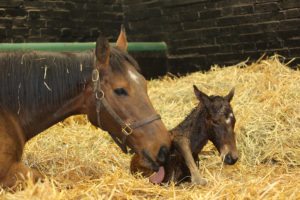 Up Next
Kind, dam of Frankel, dies aged 20