The 13th inaugural running of the Monet’s Garden Old Roan Handicap Chase became very much a family affair, as Third Intention notched a second Grade 2 of his career for owners Robert and Sarah Tizzard.

In a high-class renewal, the blinkered Royal Regatta and last year’s Hennessy hero Smad Place duelled for the lead for much of the two mile and a half contest.

The seven-strong field bunched up on the turn towards the cross fence four fences from home. Gary Moore’s 2014 Champion Chaser Sire de Grugy, improved on the inside while Third Intention – who left his mark in a fence on the first circuit – crept closer in last place under Aidan Coleman.

Third Intention was left to chase down the grey Vibrato Valtat who pinched a three-length lead after the second last flight.

As the deficit reduced to less than half-a-length coming to the last, Colin Tizzard’s nine-year-old jumped ahead touching down, going on to win by just over a length from the fast-finishing God’s Own.

A son of Azamour, Third Intention joins an impressive roll of honour which includes the mighty Kauto Star who won the race back in 2006 and Albertas Run, the 2011 winner owned by one of Aintree’s biggest supporters Trevor Hemmings.

Monet’s Garden, who the race is now named after, triumphed three times towards the end of the last decade for Cumbria-based trainer Nicky Richards.

Although in receipt of weight from all of his rivals, the gelding adds another victory at Grade 2 level having taken the National Spirit Hurdle at Fontwell Park as a five-year-old.

For his trainer and team at Milborne Port, the start of 2016/2017 season has begun brilliantly, with the stable having hit double figures already.

With their superstar hurdler Thistelcrack ready to be unleashed over the larger obstacles this week, and Cue Card waiting in the wings, the Tizzard team have plenty to look forward to over the coming weeks.

Earlier in the afternoon, a potential star was unleashed as the Dan Skelton-trained Robin Roe sauntered to an impressive victory in the opening maiden hurdle.

The five-year-old gelding by Robin Des Champs was making his debut over hurdles after running out a winner of a bumper at Warwick – his only start under rules back in March. Held up towards the rear by Harry Skelton, came through to lead from market rival No Comment after the last and came clear to score by a taking 12 lengths. 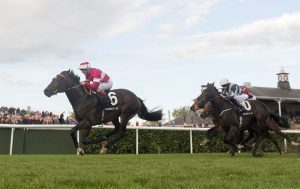 Up Next
Smooth Trophy success for Rivet