Crystal Ocean was also popular, with three first-crop foals selling for an average of 32,333gns

The Tattersalls December Foal Sale opened in strong fashion on Wednesday, the first four sessions of foal trade in Newmarket this week.

A Time Test colt in possession of the potent combination of a fashionable sire, promising update and smart physical headed proceedings, falling to Jimmy Murphy of Redpender Stud. A number of the pinhooking community followed in the youngster, bred by Overbury Stud out of Wild Mimosa, and once the bidding opened at 20,000gns – which is almost unheard of for the opening day – it swiftly rattled north until finally hitting 75,000gns, the winning bid struck by the Redpender team. 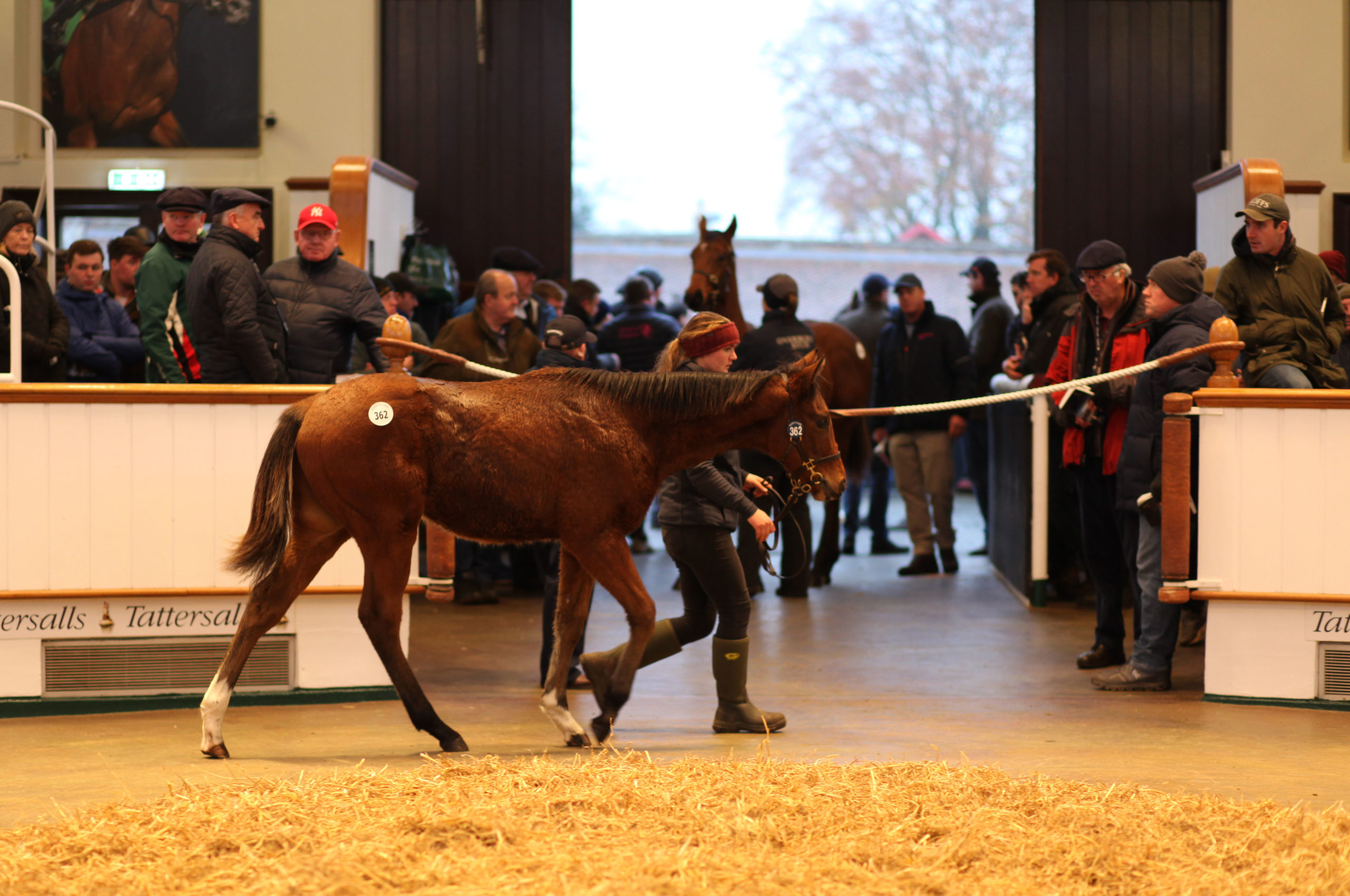 “He’s a nice-looking horse by a promising young sire,” said Murphy. “I’ve never had one by Time Test before, but this is a well-made horse so we will hope for the best. There is a bit going on in the pedigree. I thought less than that would buy him, but you have to keep bidding if you want one.”

Time Test boasts four stakes winners in his first crop and this colt is also a full-brother to another potentially smart one in Love Interest, a debut scorer for David O’Meara and Clipper Logistics at Newcastle last month. She is one of four winners out of Wild Mimosa, an unplaced Dynaformer half-sister to the Group 1 winners Summoner and Compton Admiral purchased by Overbury for 52,000gns through Blandford Bloodstock in 2017.

“The mare has been a huge success for us,” said Simon Sweeting of Overbury Stud. “She has been wonderful – but she is a mare we have to take the foals off her straight away as she savages them. She has done it twice, so we raise them on foster mares and we have one organised every time now.”

He added: “I have got a breeding right in Time Test, he is a fabulous stallion. He has got a lot further to go and we are very excited about him. It is great for The National Stud that it has got such a good horse, I am thrilled about that.”

Time Test was also represented later in the day by a colt from the National Stud who made 66,000gns to JC Bloodstock. Philip Mitchell bred the colt out of Sweet As Honey, a Duke Of Marmalade half-sister to Listed winner Tactician from the Queen’s Phantom Gold family.

As a result, Time Test ended the day with an average of 35,875gns for eight foals sold.

Outside of Overbury Stud, it was a particularly productive day for Highclere Stud, which not only witnessed market appreciation for its first-crop sire Land Force but also sold three lots for 60,000gns or above.

They were led by a homebred Zoustar colt out of the Listed winner Making Eyes for whom agent Billy Jackson-Stops, signing as JS Bloodstock/RGS, went to 70,000gns.

“This is for a new pinhooking venture for Tony Elliott’s Rogues Gallery,” said Jackson-Stops. ”He is a good-looking sort, a good physical and we liked him. Hopefully there will be good upside with Zoustar [his first European two-year-olds hit the track next year], and this colt is likely to be prepped for next year sale in Newmarket,.” 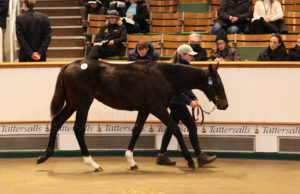 With three foals sold for a total of 195,000gns, Highclere Stud wound up as the day’s leading vendor.

“We are delighted with the Zoustar colt,” said Jake Warren of Highclere Stud. “He’s a lovely moving horse, all class. The mare was good herself and her four-year-old, [multiple winner] Ascension has been sold to race on with Ciaron Maher in Australia, so there’s a bit happening.”

Unsurprisingly, the stud’s Land Force is well represented within the Highclere Stud draft this week and judging on the reaction to the first few sent through the ring yesterday by the stud, they have plenty to look forward to.

Con Marnane went to 65,000gns for Highclere’s colt out of Princess Margaret Stakes third Musical Art while Alex Elliott paid 60,000gns for the stud’s colt out of Delvigne, herself a Redoute’s Choice half-sister to top sprinter Regal Parade.

“He’s a lovely quality colt,” said Marnane of his purchase. “I love the stallion, think he could have some quality yearlings next year, and this lad looks a real runner. We had to go an extra bid to get him, and it is the third foal we have bought this autumn. I have seen a few by the stallion, they are very nice, he was a very good racehorse.”

A date next autumn, meanwhile, beckons for Elliott’s purchase. 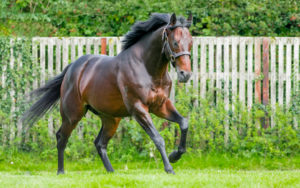 “He’s a lovely horse and is bred to be fast,” said Elliott. “It’s a pedigree I’ve always been fond of and he’s a good early foal too. I was a big admirer of Land Force when he was racing and I’m a huge fan of the Scat Daddy sire line. I thought this was the best colt here today by the sire so I was very keen to get him.

“He’ll come back for resale next year. He could turn up anywhere; the good horses are easy to place so hopefully he’s one of those. He’s been bought for a syndicate and will probably go back to be reared Ireland.”

Warren was understandably delighted with the market’s reaction to the stallion, a son of No Nay Never who won the Richmond Stakes for Aidan O’Brien.

“We brought several nice foals here today by him to showcase his stock to the market,” he said. “He’s throwing very mature stock, which I think is typical of the sire line, and he’s a pure-breeding bay. The pinhookers seem to like them and yes, we’re delighted – it’s a great start for him.”

He added: “He was a €350,000 yearling himself, which tells you how good-looking he is, and I think people respect the sire line and they respect his pedigree.”

Also popular was an Ulysses colt from Bearstone Stud, who was purchased by Jamie Railton for 60,000gns. The colt is a half-brother to Listed winner Vintage Brut and out of the winning mare Traditionelle.

While young sires such as Land Force, Inns Of Court and Magna Grecia were each represented by foals that sold for in excess of 40,000gns on Wednesday, it was actually Coolmore’s Crystal Ocean – marketed as a dual-purpose sire – who led the away among the first-crop stallions in terms of average.

The son of Sea The Stars, himself a durable and brilliant performer who won seven Pattern races for Sir Michael Stoute including the 2019 Prince Of Wales’s Stakes, was represented by three foals that sold for an average of 32,333gns.

They were led by a grandson of German champion Guadalupe who is set to reappear under the Aughamore Stud banner next autumn after selling to Matt Houldsworth for 46,000gns.

“He has been bought for resale, hopefully for something like Book 2 here,” said Houldsworth. “He’s just a really quality individual, a very good moving horse. I haven’t seen many by the stallion, but I just think he was a very good racehorse. I know he is standing as a jumps sire, but that’s not to say he won’t be a good sire of Flat horses.” 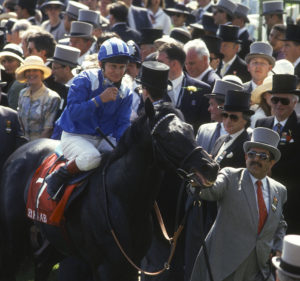