The tussle for the 2021 Flat jockeys’ championship looks like going to the wire after William Buick closed the gap on reigning champion Oisin Murphy to two after riding a double at Nottingham on Wednesday.

Murphy, champion jockey in 2019 and 2020, leads Buick 150-148 with three days to go as the Godolphin rider’s hot streak – his Nottingham double followed a treble at Leicester on Tuesday – has taken him to within touching distance of his first title.

The battle resumes at Chelmsford’s evening meeting on Thursday when Murphy is booked for six mounts and Buick gets the leg up on seven runners.

Both riders are in action at Haydock on Friday – Murphy is currently down for five rides, Buick eight – before a potential showdown at British racing’s big finale, QIPCO Champions Day, at Ascot on Saturday.

Murphy’s Ascot mounts are set to include Dragon Symbol in the Sprint and Alcohol Free in the Queen Elizabeth II Stakes, while Buick is set to partner Adayar in the Champion Stakes providing the Derby and King George hero has recovered from his run in the Prix de l’Arc de Triomphe on October 3, in which he finished fourth behind shock German winner Torquator Tasso on heavy ground.

The surface in Berkshire looks like being considerably better than that which prevailed at Longchamp, with the going currently good to soft (soft in places on the round course) and little rain forecast before the weekend.

Ascot is set for its biggest crowd of the year on Saturday with 25,000 racegoers expected to come through the gates for QIPCO British Champions Day. 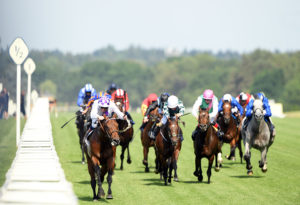 Up Next
Poetic Flare retired to stud in Japan