Apprentice jockey George Wood has made a big splash this season

Having talent is one thing, but putting it to good use is sometimes easier said than done. For 18-year-old George Wood, his talent has certainly shone through in the saddle this year, with his 7lb claim proving a big hit amongst trainers.

From Burnham-on-Crouch in Essex, the apprentice has always been around horses, and was given ponies to ride by his parents from a young age. Like countless others down the years, Wood learnt the trade in pony races before the opportunity to join James Fanshawe in Newmarket became available during his school holidays.

As his passion grew, Wood went to the racing school for four weeks before taking up a full time position at Pegasus Stables two years ago.

At the end of May last year he had his first race ride aboard the filly Angel Delight in a Leicester claimer. After keeping his head down and working hard at Flat racing’s headquarters, he was to get only a handful of opportunities for the rest of the campaign, but fast-forward to this season and things have really taken off, with his debut winner coming in March on the fibresand at Southwell.

That first triumph, on the Gary Moss-trained four-year-old Henry Smith, fulfilled an ambition for the young rider.

“It’s something I’ve always wanted to do,” Wood said. “It was really good but was more of a relief to get a winner, having had my licence for the best part of a year.”

Growing up, Wood had plenty of inspirations on the Flat, including the recently-retired Kieren Fallon. Yet he is also a big fan of a rider in the National Hunt sphere.

“I like the way Ruby Walsh rides over jumps, he’s very stylish. I’m quite a tall lad so George Baker is my height and someone I naturally look up to.”

Just over a month after his breakthrough success, the apprentice was to make his mark at one of the biggest meetings of the year on 2,000 Guineas weekend. He partnered Fanshawe’s Knight Owl to victory in the opening Suffolk Stakes handicap, for owner Annabelle Condon.

The race was the first televised on Channel 4 that day and gave him recognition that he hadn’t received before.

“The win really pushed everything to the next level. I’ve been able to ride for some nice trainers and nicer horses as well.”

Wood has been going from strength-to-strength over the last few months, accumulating 14 winners this season for a variety of trainers. Just this month alone he has ridden for no fewer than 17 different handlers.

“I’ve been riding for quite a few big trainers like Ed Dunlop and Simon Crisford. I’ve got a few more lined up for him, too.”

He picked up a few notable rides at Royal Ascot, the first aboard the Fanshawe-trained Hors De Combat in the Royal Hunt Cup and Accession for Charlie Fellowes in the Wokingham, two of the biggest handicap races of the season.

At Newmarket’s recent July Meeting, he got the leg up aboard the favourite for the Bunbury Cup, Buckstay, for multiple Group-winning owner Fitri Hay, finishing ninth behind Golden Steps. Officially rated 109, the gelding is so far the highest-rated horse he has ridden in public.

With the Qatar Goodwood Festival on the horizon, the opportunities for the jockey will no doubt come thick and fast, but a wise head on young shoulders realises just how valuable his 7lb claim is.

“I’m only four or five winners away from losing my 7lb claim so I want to try and hold on to that for as long as I can, but you have to keep riding winners.

The next step for Wood once the season finishes is to build up his riding skills and experience overseas in either America or Australia, a decision he will make closer to the time.

An ambitious young man with a strong mindset, Wood hopes one day to be riding Group 1 winners around the globe, with the dream to become champion jockey like so many greats before him.

“The plan is to win some big races – who knows where I’ll end up? We’ll see but I’ll just have to take it one day at a time.” 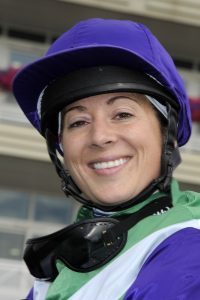 Up Next
Turner tastes race action en route to Ascot