It would be true, if a little misleading, to say that Anita Wigan has spent the last 27 years looking for the right man. Now she has found him. When The Right Man surged to victory in the Al Quoz Sprint at Meydan in March, he became the first horse bred by Wigan to win a front-line Group 1 race.

It was a close-run thing. Having quickened smartly to overhaul Ertijaal approaching the final furlong The Right Man had to fend off Long On Value, whose flying late thrust failed him by a scant nose. Cue pandemonium at West Blagdon Stud, where Wigan was watching the race with her husband James.

“It was absolutely wonderful,” she says. “We were quite surprised because the opposition was very strong, and suddenly we started receiving all these messages and texts. The Right Man is my second Group 1 winner but this was a better race than Leadership’s win in Italy (the 2003 Gran Premio di Milano).” 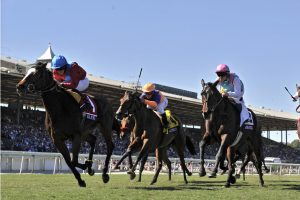 There have been several twists and turns along the way. In 1993 Wigan bought The Right Man’s grandam Three Terns, a daughter of Prix de l’Arc de Triomphe heroine Three Troikas, for 19,000gns at Tattersalls. From Three Terns she bred and raced the Warning filly Three Owls, a winner at Brighton, whom she subsequently gave to her son-in-law, Ben Goldsmith, on his marriage to her daughter Kate.

Some years later, in 2010, Goldsmith decided to disperse his bloodstock assets and returned Three Owls to Wigan. The mare had been a frequent visitor to Montjeu, who was bred and initially raced by Ben’s father, Sir James Goldsmith, before his sale to Michael Tabor.

“That was the point,” Wigan reflects. “Three Owls was perfect for Montjeu, both physically and on paper.”

Three Owls did well in her trysts with Montjeu. She bred the stakes-placed Three Moons, subsequently dam of Listed winner Tashaar, while her last foal by Coolmore’s late sire was Steve Rogers, a winner six times to date who ran third in the recent All-Weather Marathon Championship at Lingfield.

When Wigan retrieved Three Owls she sent her to Lope De Vega. The consequence was The Right Man, whose triumph in Dubai was his seventh from 11 starts. There should be more to come from this lightly-raced five-year-old, who is very much on the march.

All this must have seemed like a pipedream to Wigan when she took her first, tentative steps into the world of breeding. She was prompted by her first husband’s aunt ‘Dolly’ de Rothschild, who bequeathed her a broodmare in 1990. By then she’d developed a taste for the sport through riding out for Cumani, to whose wife, Sara, she is distantly related.

“I have always loved horses,” she reflects. “I rode as a child and lived near Newmarket. I started off by looking at pictures in Pacemaker magazine and when I got more involved during my time with Luca I discovered a whole new world.”

Her new-found fascination found expression at Rushbrooke, the Rothschild family estate near Bury St Edmunds where she lived with her late husband. And there she stayed until her son, James, moved to the US two years ago, in the process triggering Rushbrooke’s sale.

Wigan, 59, has fond memories of breeding and raising horses at Rushbrooke, especially since she never had more than a handful of mares and their progeny on the stud. Leadership was bred there; the son of Selkirk was sold as a yearling to Khalid Abdullah for IR£350,000 after being sold by the Wigans as a foal for 42,000gns.

Also raised at Rushbrooke was Green Moon, owned by her aforementioned son-in-law Ben Goldsmith, who outpointed subsequent Dubai World Cup winner Monterosso in the London Gold Cup at Newbury before his sale to Australian business magnate Lloyd Williams.
Of course, Green Moon found greater fame on his export to Australia, where victory in the 2012 Melbourne Cup propelled him to career earnings just shy of £3.5 million.

“Green Moon was a beautiful yearling but very naughty with it,” Wigan recalls. “His dam, Green Noon, was bought for Ben specifically to visit Montjeu but she died soon after foaling Green Moon, who was her only foal.”

Leadership and Green Moon are legacies from Anita’s second marriage 15 years ago to James Wigan, who has advanced his family’s reputation as Britain’s foremost consignor of foals from West Blagdon, an idyllic property in Dorset. The couple bred Leadership from Louella, the first mare they owned in partnership. And it was James who bought Green Moon’s dam.

One of James’ clients is Waddesdon Stud, in Buckinghamshire, which he manages for the Rothschild family. On their behalf he sought out and bought some top-class breeding stock – among them Magnificient Style, subsequently dam of Nathaniel and Great Heavens – when Nat Rothschild joined his mother, Lady Serena, in upgrading the Waddesdon broodmare band ten years ago.

While selling Rushbrooke broke my heart initially, a big weight has been lifted off my shoulders

When Rushbrooke was sold Anita moved down to West Blagdon, although her bloodstock was relocated to Whatton Manor Stud and Newtown Stud in Ireland, with one mare, Three Owls, kept at Haras de Meautry in France. Three other mares she owns in partnership with her husband are based at West Blagdon; otherwise she no longer has daily contact with much of her stock.
“I was very proud of what we achieved at Rushbrooke,” she says.

“It was easier keeping stock there because you didn’t have to carry the cost of each horse, as I do now. Getting the [keep] bill each month makes you much more attentive of what you are doing, especially when you are trying to balance the books.

“It’s a big change for me not to see my horses regularly but I also keep some quite locally [at Lushes Farm] in Somerset with James Read, who is first class. And while selling Rushbrooke broke my heart initially, it was a big responsibility. I now feel like a big weight has been lifted off my shoulders. I’m thrilled with where my mares are, and everything is wonderful.”

The stud at West Blagdon started when James’ mother, Dawn, was given two mares and some land by her father, Charles Gordon, who bred and raced horses largely with Jack Jarvis. Gordon won the 1949 Lincolnshire Handicap, the race’s centenary running, with Fair Judgement. The handsome trophy, redolent of the race’s stature back then, remains at West Blagdon today.

James Wigan’s parents only kept a handful of mares but their progeny, offered occasionally at Tattersalls as foals, were in such demand that they topped the December foal sale five times. “It was more of a hobby to them but they were very successful,” Wigan says.

That established West Blagdon’s reputation, which Wigan had since embellished. So much so that over the last ten years the West Blagdon foal draft, usually around 12-strong, has reaped an average price in excess of 100,000gns per head for 91 lots sold.

In 1978 Wigan also established London Thoroughbred Services, a bespoke agency which offers a personalised service to breeders such as George Strawbridge and now Denford Stud in addition to Waddesdon. It is also heavily involved in bloodstock traffic to Japan.

One of the mares that passed from Charles Gordon to his daughter was Firmament, whose daughter, Pelting, became West Blagdon’s mainstay. Pelting is ancestress of several Group 1 winners, among them Bassenthwaite, Brashee, Central Park and Keen Hunter. Sadly, however, her line has now expired from West Blagdon.

It all went up in a puff of dark smoke. “I had two full-sisters, Piffling and Pivka, who I sold,” Wigan relates. “Piffling then died of colic when she was very young, just after I had sold her filly by Footstepsinthesand (Volunteer Point), whom I would otherwise have kept. She was the last one.” 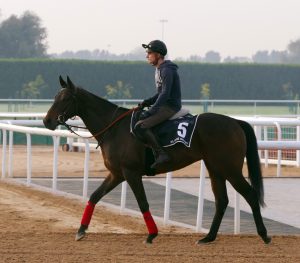 The Right Man during morning trackwork at Meydan

The absence of Pelting’s blood from West Blagdon has been mitigated by Wigan’s purchase of Masskana for 48,000gns in 1994. Masskana has been prolific, producing two Group 1 winners in Eagle Mountain and Sulk, the latter retained by Wigan. Sadly, Sulk died young, although the upshot was that Wigan retained Masskana’s filly foal at the time. But for that, Dank would have passed through the auction ring at Tattersalls in time-honoured fashion.

Dank is the best homebred to race in Wigan’s colours by her brace of Grade 1 triumphs in the US, notably the 2013 Breeders’ Cup Filly & Mare Turf. By Dansili, she has since foaled two successive fillies by Galileo and returned to him this year.

Wigan celebrated Dank’s high achievement by commissioning a striking oil painting in which Dank stands high on the undulating West Blagdon pasture, with the south coast in the background. This is truly a magical stretch of countryside at Cranborne Chase, which is part of a large expanse of chalk downland.

It is also Hardy country. When the eponymous heroine of Tess of the d’Urbervilles danced in a barn at Cranborne before walking across the hills towards the village of Pentridge, she would surely have trespassed on Wigan family land.

Unlike Tess, who was seduced in a nearby forest, the land has been kind to three generations of Wigans. And West Blagdon itself has been greatly enhanced by the recent addition of a row of boxes that look like they have been standing since time immemorial.

Spacious and redolent of a bygone age, they are clad in wooden panels to a height of three feet from the floor, which is made of compressed chalk for natural drainage and replaced when necessary. At West Blagdon, with James and Anita Wigan in residence, it is very much a case of back to the future. 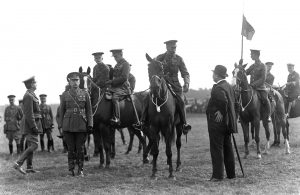 Up Next
Triumph over adversity