One only needs to note the decline in the number of active National Hunt broodmares to realise that plenty of breeders faced tough times through the recession. Nowhere was this more keenly felt than in Ireland, where the number of jumps-bred foals dropped from 4,849 in 2006 to 2,203 in 2011. A resurgence has begun, both in numbers and in demand for ‘store’ horses at the sales, and it is a wave which two young National Hunt breeders are hoping to continue to ride.

Harry and Lorna Fowler aren’t exactly new names and faces to the sport. Both were keen amateur riders and grew up in training families in Ireland and Scotland – Harry being the son of the late John Fowler, whose sister is Jessica Harrington, while Lorna is the daughter of stalwarts of the Scottish jumping ranks, Johnny and Sue Bradburne.

In 2008, John Fowler was killed in an accident on the family’s County Meath farm, Rahinston, a tragic turn of events that hastened the couple’s move from Newmarket, where Harry was working for Tattersalls and Lorna was pursuing a presenting career for Racing UK and Newmarket Racecourses among other clients.

After two years of frequent commuting from England, Harry and Lorna settled at Rahinston to help his mother, Lady Jennifer Fowler, better known as ‘Chich’, while Harry continued to work for Tattersalls, now for the Irish division at nearby Fairyhouse.

“It turned Chich’s world upside down and it turned Harry’s world upside down,” says Lorna. “Chich was incredible because she was here on her own most of the time while Harry was commuting. She was running this enormous farm, and the fact that she kept it going through the recession and didn’t have to make people redundant is a real credit to her.”

Harry adds of his mother, who represented Ireland as a three-day eventer: “She was the one with all the horse sense. Dad was the trainer and the businessman but she was the brains behind the feeding, the medicines, chiropractors – everything to do with horse welfare.”

As a renowned trainer of fillies and mares, including the prolific Opera Hat, winner of the Grade 1 Melling Chase at Aintree, and Irish Grand National winner Maid Of Money, John Fowler’s training business dovetailed perfectly with the stud side of the Rahinston operation, with lines initially bought by Harry’s grandfather, Brigadier Bryan Fowler, still in situ today. During the recession and family upheaval, the level of activity dipped to the point that only four Rahinston mares were covered but over the last three years the Fowlers have strived to re-energise the 700-acre farm and this year have 25 mares in action, including boarders.

That period has not been all plain sailing, however. Shortly after returning to Ireland, the joy at the arrival of their first child, Rosie, now three, was offset by the death of Chich Fowler a year later.
Lorna, who oversees the day-to-day running of Rahinston, says: “Both Harry’s parents should be enjoying their retirement with their grandchildren now and there’s no question that it’s very sad that they’re not here. 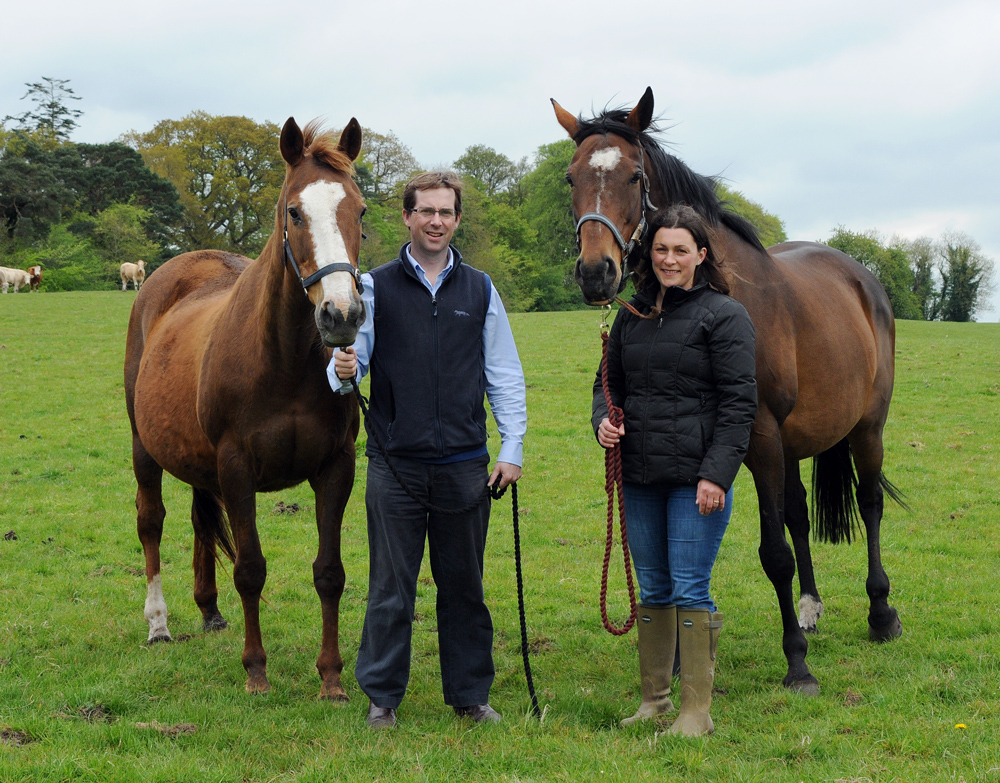 Harry and Lorna Fowler with Circle The Wagons and Dalamine

“We just had to keep everything going – you sink or you swim and we made sure we swam. I think the harder things are, the harder you work.”
That hard work is starting to pay dividends with the recently concluded National Hunt season being something of a banner year for Rahinston residents, courtesy of major winners at the Cheltenham Festival and Grand National meeting. Harry bought Dalamine, dam of Grade 1 RSA Chase winner Don Poli for €16,000 at Tattersalls Ireland in 2013, while 19-year-old Circle The Wagons finally repaid Chich Fowler’s faith in her by producing the unbeaten Grade 2 Aintree bumper winner Barters Hill.

“Barters Hill is an extraordinary story really,” says Harry, who sold the Ben Pauling-trained Kalanisi five-year-old at the Derby Sale two years ago. This year’s sale will feature a draft of seven from Rahinston, including Barters Hill’s three-year-old brother.

“Circle The Wagons has been retired for four years and she has this wonderful air about her – she just glides through life and I think we’ve all wondered what to do with her over the last few years. She’s been a companion really and has served her purpose doing that.

“Then this year Barters Hill started doing his thing and we have to give credit to Dermot [Fagan, Rahinston’s head man], as he was the one who said we should think about putting Circle The Wagons back in foal. Our excellent maternity vet Kevin Foley looked at her and then looked again and then Barters Hill won at Aintree and she was covered a day later by Kalanisi.”

Harry adds: “My mother bred Barters Hill and I can’t help thinking she’s looking down over Circle The Wagons now. She’s no oil painting and neither is Barters Hill, which is why he was sold for €16,000, but he’s just honest and he wants to gallop. We’re selling his full-brother this year and he’s equally plain.

National Hunt breeding is very much a labour of love; I think all jumps breeders should be allowed through the Pearly Gates without question

“She’s been an unlucky mare – a number of her offspring have been killed – but we’ve brought her out of retirement and we’re keeping our fingers crossed that we get a filly next year.”

Meanwhile, Dalamine has a yearling filly by Beat Hollow who will be retained and, after her success in France with Poliglote, has been scanned in foal to another Sadler’s Wells line stallion, Kayf Tara.
“National Hunt breeding is very much a labour of love,” says Harry. “I think all jumps breeders should be allowed through the Pearly Gates without question – but the reward when it all goes right is fantastic. We bought Dalamine a few years ago and when Don Poli crossed the line in front in the RSA Chase at Cheltenham there couldn’t have been a better day in the world.”

The ‘we’ to whom he refers is not just himself and Lorna but also his old school friend, racing aficionado Alex Frost, whose backing of the Fowlers’ ambitious plans for the rejuvenation of Rahinston has been a welcome shot in the arm. Fowler and Frost now own four broodmares in partnership, including Dalamine and Cesana, the dam of impressive first-time-out bumper winner Grand Turina, as well as several horses pinhooked for the forthcoming Derby Sale. Among those is a statuesque Laveron half-sister to another recent winner, the Willie Mullins-trained Karalee, who won a Killarney maiden hurdle by seven and a half lengths in May.

“We wouldn’t have been able to grow this place without the help of ‘Frosty’,” says Lorna. “His enthusiasm for Rahinston has been immense and I hope that success is waiting in the wings for him in terms of his breeding operation. His main aim is having winners at big meetings. We’ll have to sell some stock along the way but primarily we want to have runners and winners.” 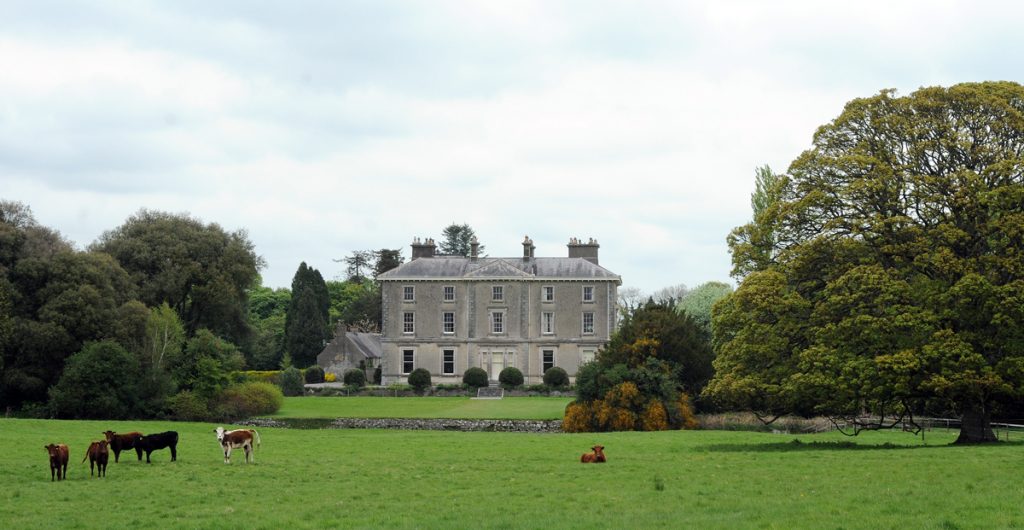 Rahinston Farm and Stud, which is also home to the Summerhill point-to-point course

Along with newer clients Charlie Liverton and trainer Don Cantillon, for whom Harry rode many winners in point-to-points, Rahinston is still well supported by plenty of friends of the previous generation of Fowlers, including local farmer Tom Bruton, Valerie Cooper and Robert and Jackie Chugg. Furthermore, there’s vital continuity in the human team at the farm, with Dermot Fagan having worked at Rahinston for 40 years, the last 20 of which he has been accompanied by his son, Alan.

A winner this season which will have given all concerned as much pleasure as Don Poli and Barters Hill was Woodland Opera, a son of the now-pensioned 27-year-old Rahinston star Opera Hat, who won on debut at Leopardstown for Jessica Harrington. The five-year-old was bred at the farm by Valerie Cooper, wife of the late bloodstock agent Tom Cooper and mother of Alan, Patrick and Diana, and he races for a partnership which includes her daughter and friend Carolyn Waters.

“Tom Cooper originally bought Opera Hat for Valerie and she was trained by dad to win 15 races,” recalls Harry. “She’s still with us in retirement though she spent much of her breeding career in England. Valerie’s children tracked her down and brought her back here as a surprise so it was quite an emotional reunion. Mum planned her mating with Robin Des Champs which resulted in Woodland Opera and he was born, raised and pre-trained here.”

Harry cites his father’s old sparring partner Robert Chugg as having had the greatest influence on his career. The association between the two families continues with various members of the successful Marello family, including Jennifers Diary, the dam of Listed-winning hurdler Mischievous Milly and a daughter herself of a John Fowler purchase, Chattering, whom he named after his talkative wife.

“I admire Robert and Jackie Chugg immensely,” says Harry. “I’ve learnt so much from Robert and he’s been a big influence on us being where we are today. Mischievous Milly won a Listed race for Oliver Sherwood and that’s one side of the family we share and we’re also breeding from another side through Banjaxed Girl.”

Rahinston was inherited from an uncle by Harry’s grandfather, Bryan ‘Frizz’ Fowler, who, apart from being a decorated officer of the British Army who played a significant role in the El Alamein campaign, was a hunting and point-to-pointing man and member of the British polo team. The history of the place is important to the current generation of Fowlers at the helm – and plenty of the Corinthian spirit remains – but this is very much an operation looking forward rather than back.

Harry, who admits he enjoys spending his evenings poring over pedigrees and pondering matings, says: “We inherited a few of the old mares but we’ve bought into new blood – we have our own ideas on the lines we want on the farm. We’re continually changing the portfolio and we also buy young stock to target the Derby Sale.

“I don’t want to totally pigeon-hole ourselves as National Hunt breeders – it’s the mainstay and I hope it will help to keep the show on the road but we’re branching out to the Flat too. I’ve bought what I hope will be my foundation Flat mare from the Silca-Cisa family. A big aim would be to have a couple of really classy Flat mares.”

On fertile limestone land in the vicinity of studs of the quality of Moyglare, Owenstown, Derrinstown, Tally-Ho, Kilcarn Park and Juddmonte’s pre-training farm Ferrans, the location of Rahinston is as advantageous as the ever-questing mind of its young master who is “still just on the right side of 40”.

He continues: “I love going to people’s farms and looking at how other breeders do it differently. I’m lucky enough to be able to visit some really good breeders and learn things from them.

“There’s a very ambitious young team at Tattersalls Ireland which makes my job very exciting. I’m in charge of the UK side of things as I spent 14 years there with Tattersalls and know a lot of the UK clients.”

With the Fowler family having been augmented by the arrival of Johnny 15 months ago, there’s every chance the baton will be passed to the next generation in years to come.

“Our aim is to leave Rahinston in a decent state for Rosie and Johnny,” says their father.

If knowledge, dedication and sheer hard graft are markers for success, then that ambition looks to have an odds-on chance of being realised. 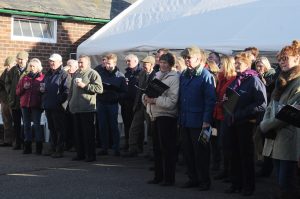 Up Next
Recognition for breeders at Update days