The price of pictures
Stories

Back in 2010 when the now-popular La Route des Etalons was started in a bid to reinvigorate France’s breeding industry, Haras de Bouquetot, like the country’s stallion ranks, was experiencing something of a dormant spell.

Having been developed in the 1960s by the Wessweiler family and more recently used as a training centre by Jennifer Bidgood, the stud was restored to its original purpose following its purchase in 2012 by Sheikh Joaan Al Thani.

Its revival has been swift and has helped to play a part in a current dramatic resurgence for the breeding heartland of Normandy, not least through an increasingly appealing stallion roster. This year that list includes the most expensive new sire in Europe, Al Shaqab Racing’s dual Group 1 winner Shalaa.

Throughout his juvenile season, the son of Invincible Spirit blotted his copybook only once, when greenness on debut saw him finish last in a competitive conditions race won by the subsequent Group 2 Superlative Stakes winner Birchwood. The penny dropped quickly for Shalaa and he constructed a seamless procession of victories, most importantly perhaps in the Qatar Richmond Stakes during the meeting now so heavily backed by his owner, followed by that Group 1 brace in the Prix Morny and the Middle Park Stakes.

Even after a three-year-old season seriously blighted by injury he was able to return a winner, at Ascot in the Group 3 Bengough Stakes, but that pipe-opener for his swansong on QIPCO British Champions Day was not enough to have him properly match-fit against battle-hardened sprinters.

Shalaa nonetheless remains a highly enticing prospect for breeders. They visited him in their droves at Bouquetot during the recent Arqana December Sale and will not have been disappointed in the macho stallion, who takes plenty of his substance from his sizeable American-bred dam Ghurra, a War Chant half-sister to another Middle Park Stakes winner in Sheikh Hamdan’s Hayil.

Shalaa is but the latest arrival to a stallion operation that welcomed the first mares to its first two resident sires – Planteur and Style Vendome – in 2014. Since then, Olympic Glory and The Wow Signal have joined them at the brand new Bouquetot stallion yard which has been painstakingly built in the traditional beamed style so redolent of the Normandy countryside. Set in Clarbec, just 15 minutes’ drive from Deauville, the farm is at the heart of the French stallion business which now pumps with renewed vigour.

“It has been an effort because around ten years ago in France we lost Anabaa, Linamix, Kendor, Bering, Highest Honor,” says Benoit Jeffroy, Manager of Haras de Bouquetot and Bloodstock Advisor to the Al Shaqab operation.

“We had good stallions known to an international standard and then they all disappeared. The talk back then was that we needed to find some good stallions for France and some incentives were put together. It took time but then horses like Le Havre and Siyouni started to take off. France has been through a dip but it’s now coming back up.”

In Style Vendome, a son of Anabaa, Haras de Bouquetot is carrying on one of the traditional French sirelines, while Olympic Glory, Planteur and The Wow Signal all represent the Danehill Dancer line which had been absent in the country until Air Chief Marshal retired to Haras de la Cauviniere. Shalaa adds a different string to their bow through the speed-orientated Green Desert branch of the Danzig dynasty which has so many foot soldiers in Britain and Ireland.

Jeffroy says: “That’s probably one of the main things for Al Shaqab: to develop a really good stallion roster. And it won’t just be in France. We’re standing Toronado at the National Stud in England and eventually we want to be standing horses around Europe. Shalaa is probably the most exciting horse to retire to France in a long time. I can’t remember a horse starting at €27,500 first season in France.

“Even at that price he’s full. That says a lot for the quality of mares in France, which is going up: this year they bred the best horse in Europe – Almanzor – and the best miler filly in Qemah.” 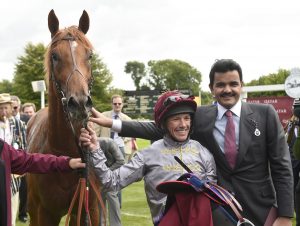 Of the 150 mares to visit Shalaa this year in France, around a quarter of them will be from Ireland and a quarter from England, with the rest split between outside French mares and Al Shaqab’s own mares. In tandem with the fast-growing stallion roster, a significant band of broodmares has been recruited to the 130 hectares at Bouquetot. Some have been expensive mare-sale purchases, such as Twyla Tharp, the dam of four-time Group 1 winner The Fugue, who was bought for 1.7 million gns in 2012, or Grade 3 winner Changing Skies, a three-parts sister to Nathaniel who cost $4.2 million that same year.

Others have been bought as yearlings or in training, most notably the queen of the Bouquetot paddocks, Treve, who will deliver her first foal by Dubawi this spring.

“We’re up to 120 mares now,” notes Jeffroy. “We feel we must support our stallions and we’re sending at least 15 to 20 mares to each of them. We know it’s a risk as we’re sending 80% of our broodmare band to our own unproven stallions and only 20% outside.

“This year Treve will go to Shalaa, along with Twyla Tharp and between 20 and 30 of our good black-type mares.”

The large and airy American barns that house some of those good mares are another new addition to Haras de Bouquetot. Among those nestled in their boxes are Avenir Certain’s dam Puggy, Breeders’ Cup Filly & Mare Turf winner Zagora and Al Naamah, the full-sister to Oaks winner Was who sent records tumbling when bringing the hammer down at 5 million gns at Tattersalls’ October Book 1 Sale in 2013.

Jeffroy, born in Brittany to a family of good breeders responsible for the likes of Never On Sunday and Texalina, recalls the formative years of the Al Shaqab breeding operation.

Jeffroy says: “The farm was half asleep when Sheikh Joaan bought it in 2012. In the middle was the main house with a barn of 30 boxes and about 40 hectares which were developed, and then the rest needed to be fenced. We built two barns with 25 boxes, a foaling unit. Planteur and Style Vendome were our first stallions here in 2014 – we started in the lunge ring and the office was only a piece of wood.”

And he issues a statement of intent which make it clear that the development hasn’t stopped there.

“All the stallions we stand have raced for us but in the future if there’s a good opportunity and we think we might need a new horse we may invest in one from outside,” he says. “We have only seven stallion boxes at the moment but next year we are going to expand the stallion yard and double it in size.”
As the equine population of the farm grows, so of course does the human workforce.

Jeffroy left France at 18 to work at Cambridge Stud in New Zealand “just to learn to speak English” and went on to become the youngest member of Darley’s Flying Start programme, before spending several years at Darley’s Dalham Hall Stud in Newmarket after his graduation from the course 11 years ago.

There he met Audrey Leyval, whom he describes as his right-hand woman, while she was in Newmarket to work for Shadwell. Leyval swiftly followed Jeffroy back to France as Al Shaqab started to grow and now manages the office and looks after the stallion marketing.

“It started with Sheikh Joaan [Al Shaqab’s General Manager], Khalifa Al Attiya and me,” says Jeffroy. “Nicolas de Watrigant was our agent, and that was it. Now we have 35 people at the farm, plus we have Harry Herbert, Alison Begley and Alice Jefford in England.”

One of the latest recruits to the team at Bouquetot is the man who replaced Jeffroy at Darley, Sebastien Desmontils, who will combine a role selling stallion nominations with managing Al Shaqab’s version of Rabbah Bloodstock.

“We are trying to develop something similar to Rabbah called Al Mariyah, which is the breeding and racing operation of Sheikh Joaan’s friends and associates, and Sebastien will look after them and help with their matings and other plans,” Jeffroy explains.

For someone who is soon to celebrate his 30th birthday, the man at the heart of the day-to-day running of such a fast-growing operation remains remarkably laidback about life and, despite his early world travels, maintains that it was always his intention to return to his homeland.

Sheikh Joaan is so passionate about it; he loves walking in the fields with the mares and foals

“I went to Cambridge Stud only because my cousin was a vet there and the idea really was just to learn to speak English – I never thought I’d be here where I am today,” he admits. “I was just in the right place at the right time.

“I was always planning to go back to France. Being a young breeder, it’s probably the best place to succeed – land is cheaper and the premiums system makes it easier. The last ten years have seen big changes in France – there are lots of new names among the consignors at the sales and they are all young people who have travelled around the bloodstock world and returned with everything they have learned.”

Of course it helps the young team at Al Shaqab that the head of the operation, who is also the brother of the Emir of Qatar, is, at 32, a young breeder himself.

“Sheikh Joaan is so passionate about it,” says Jeffroy. “He loves to be a farmer. He loves walking in the fields with the mares and foals and wants to know why we do this and that. He is involved in everything, from grass management to matings and the pricing of stallions.”

In just a short time, the force of Sheikh Joaan’s passion for the industry has been keenly felt, both through Qatar’s sponsorship of the Arc meeting, Glorious Goodwood and Newbury’s Lockinge meeting, as well as his participation through various agents at the sales.

If early signs are anything to go by, Al Shaqab’s contribution to the stallion industry in France and beyond will also be significant. 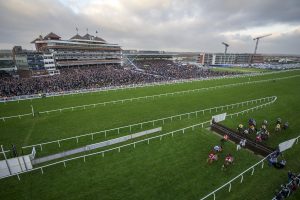 Up Next
The price of pictures