All The Queen's Horses
Stories

The Queen – a hugely passionate supporter of horseracing

The Queen, who passed away on Thursday, was an extremely successful owner and breeder who tasted Classic success with Pall Mall, Dunfermline and Highclere

The Queen, who passed away on Thursday afternoon aged 96, was a highly accomplished horsewoman and to that end, a hugely passionate supporter of horseracing.

She had been born into a family that had long shown an appreciation of the Thoroughbred and upon the death of her father, King George VI, in early 1952, inherited a group of around 20 mares alongside a string of racehorses in training. There is a story of the young Princess visiting Fred Darling’s yard at Beckhampton to view Big Game and Sun Chariot with her family ahead of the horses’ summer Classic engagements. Big Game, then the unbeaten winner of the 2,000 Guineas and favourite for the Derby, was brought out for inspection and Princess Elizabeth was allowed to run her hand over the colt; so taken was the future Queen with the horse that she is believed to have told one of her racing managers many years later that she didn’t wash her hands for several hours afterwards.

That passion never left the Queen throughout her reign.

Ironically, she came closest to tasting Derby victory on her first attempt when Aureole ran a game second to Pinza in the 1953 renewal, staged just days following her Coronation.

Sadly, the Queen never did fulfil her ambition of owning or breeding a Derby winner. But there were other Classic triumphs, namely Pall Mall in the 1958 2,000 Guineas, Highclere in the 1974 1,000 Guineas and Dunfermline in the 1977 Oaks and St Leger.

Aureole and Pall Mall aside, the 1950s were lit up by an array of high-class performers, all of them overseen by the Queen’s racing manager Captain Charles Moore and the majority trained by Captain Cecil Boyd-Rochfort at Freemason Lodge Stables in Newmarket. There was Almeria, who won the Ribblesdale Stakes, Yorkshire Oaks and Park Hill Stakes to end the year rated as the best British three-year-old filly of 1957, Agreement, who had the measure of Almeria in the 1958 Doncaster Cup, and the classy half-brothers Above Suspicion, winner of the 1959 St James’s Palace Stakes, and multiple stakes scorer Doutelle. Meanwhile, Sir Noel Murless sent out Carrozza, a filly leased by the National Stud, to win the 1957 Oaks.

Thanks primarily to Aureole’s achievements, and that of the regally-bred Landau (a Dante son of Sun Chariot) in the Sussex Stakes, the Queen ended 1954 as leading owner, a feat she achieved again in 1957. 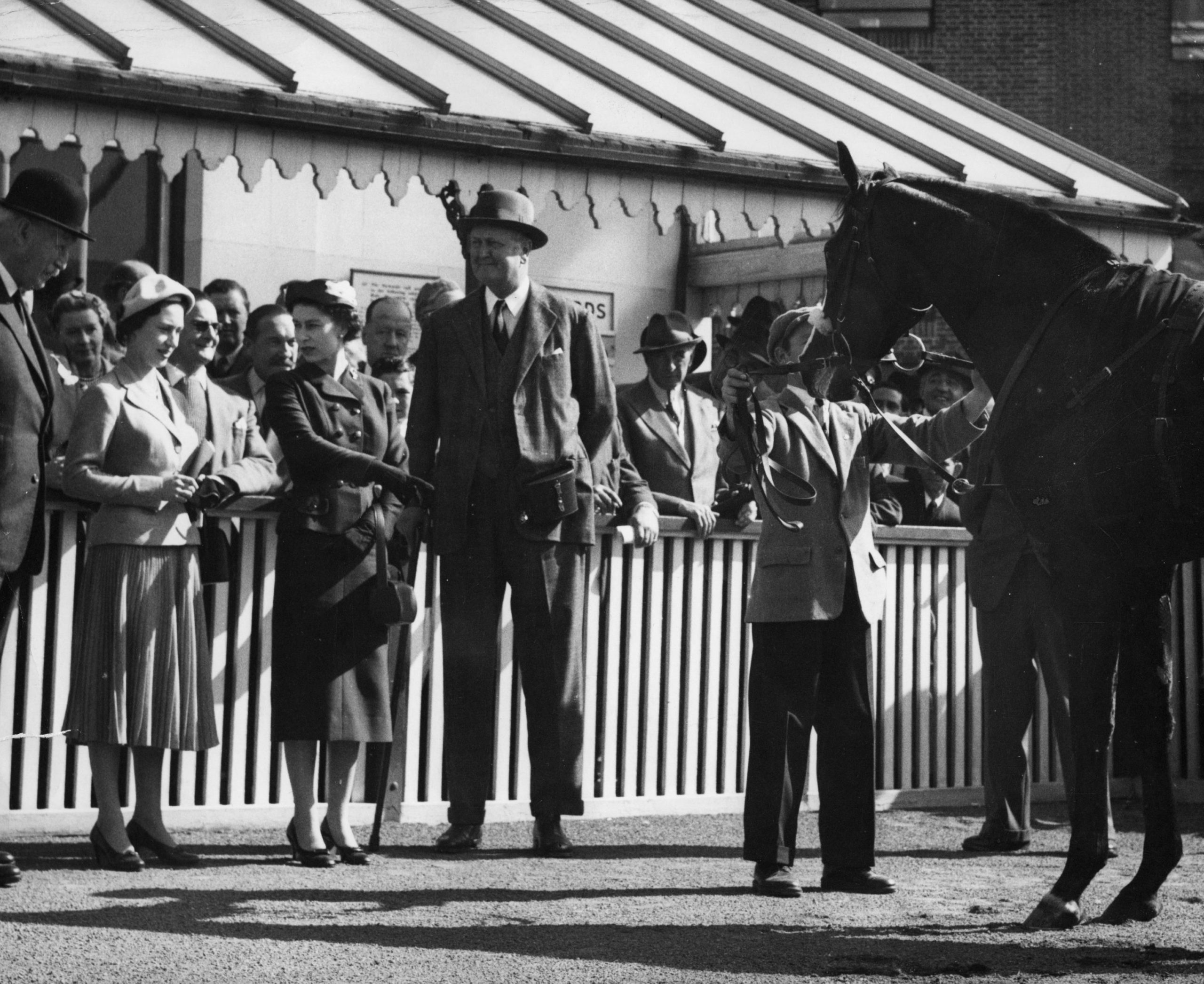 Doutelle, pictured at Kempton with the Queen, Princess Margaret and Captain Charles Moore, was a favourite. Photo – PA

The 1960s were not so productive, although there was an Eclipse Stakes winner in Canisbay as well as Hopeful Venture, a son of Aureole who won the Grand Prix de Saint-Cloud. But the 1970s was to yield two excellent fillies in Highclere and Dunfermline, both homebreds saddled to Classic success by Major Dick Hern; Highclere won the 1974 1,000 Guineas in a desperate finish from Polygamy before taking the Prix de Diane – much to the delight of the Chantilly crowd – while Dunfermline swept the Oaks and St Leger against the backdrop of Silver Jubilee year in 1977.

Highclere went on to become an important member of the Royal Studs’ broodmare band as the dam of Fillies’ Mile heroine Height Of Fashion, herself a bedrock mare of Sheikh Hamdan’s Shadwell operation, and Princess Of Wales’s Stakes winner Milford.

The horses were by then managed by Lord Porchester – latterly Lord Carnarvon – and with Lord Huntingdon assuming some of the training duties, the Queen’s colours became a regular occurrence on the international stage.

In 1989, there were a first American winner when Unknown Quantity landed the the $100,000 Arlington Handicap at Arlington Park, while other Royal runners such as Starlet, Enharmonic and Sharp Prod each won Group races on the Continent and Arabian Story ran sixth in the 1996 Melbourne Cup. Closer to home, Phantom Gold won the Ribblesdale Stakes.

Homebred Blueprint had helped open the new century on a positive footing by scoring in Group 2 company at Newmarket but sadness was to come in September 2001 with the death of the Queen’s long-term racing manager Lord Carnarvon. He was succeeded by John Warren, under whose eye the likes of top-class stayer Estimate, Right Approach (a Group 1-placed miler for the Queen before becoming a Group 1 winner in Dubai), Group 2 scorer Interlude, Oaks runner-up Flight Of Fancy, Dante Stakes winner Carlton House, unbeaten Group-winning two-year-old Recorder and the high-class middle-distance performer Dartmouth each performed with great credit in the Royal colours. 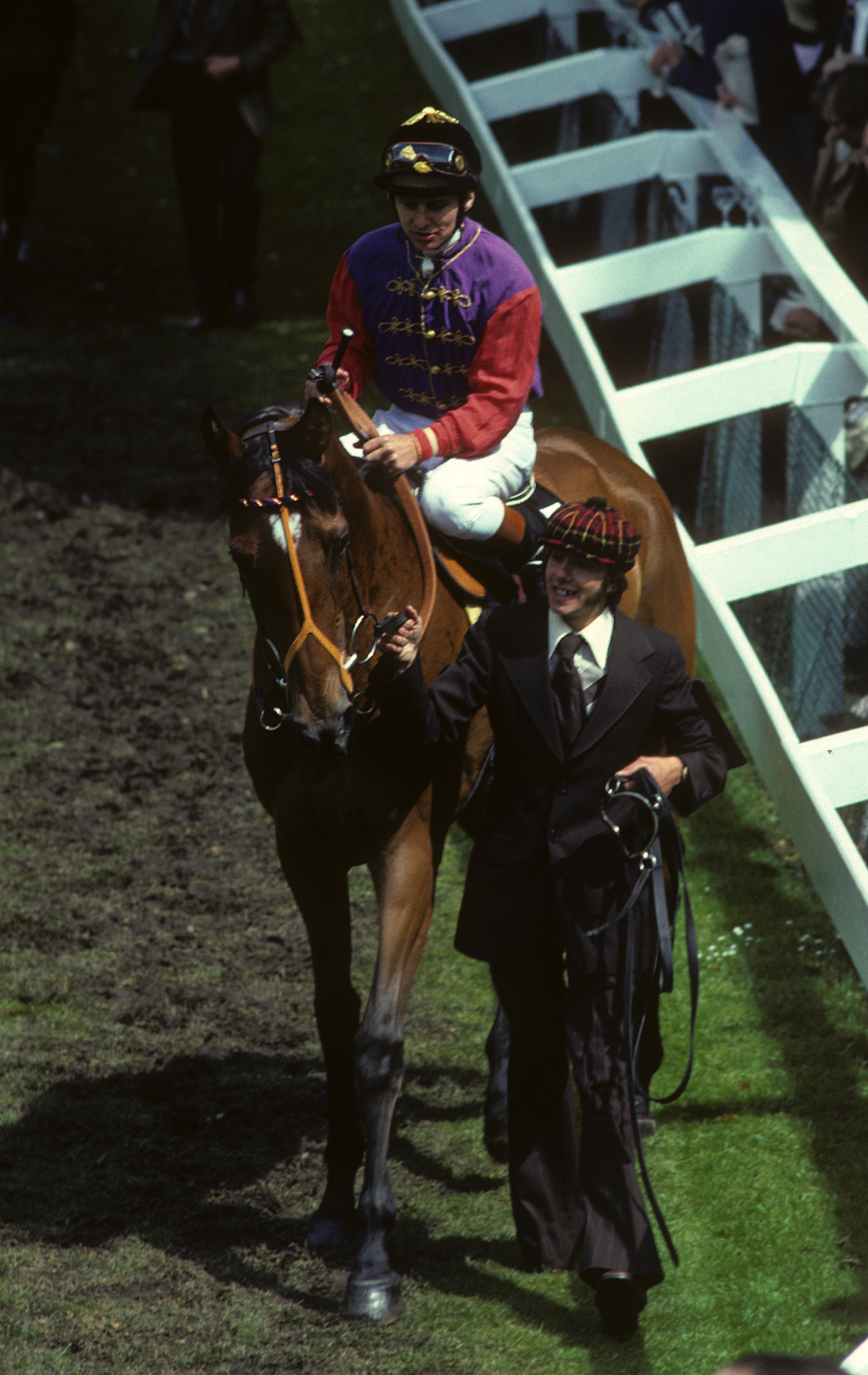 This season has also been successful, with a group of 20 winners including the recent March Stakes runner-up Perfect Alibi alongside the impressive juvenile winners Theme Park and Circle Of Fire. Last year’s Solario Stakes winner Reach For The Moon has also been running with credit.

First and foremost, the Queen was a wonderful breeder with seemingly an understanding of the horse to match her knowledge of pedigrees. While several big names naturally did get away, notably Height Of Fashion, many of the Queen’s best runners descend from families cultivated over a long period of time. Highclere and Height Of Fashion, for instance, were products of the famed Feola family as were Aureole, Above Suspicion and Hypericum.

Aureole later stood at Wolferton Stud near King’s Lynn, Norfolk, where he became a dual champion stallion, notably as the sire of Derby hero St Paddy and Arc winner Saint Crespin III. In later years, his place on the Royal Studs roster was filled by Shirley Heights, Bustino, Motivator and Royal Applause.

On the other hand, the introduction of various families also reaped rewards. Doutelle had died young at Sandringham Stud and it was reportedly in light of her affection for the horse that the Queen instructed Captain Moore to purchase a yearling by the stallion at the 1961 yearling sales. Moore settled on a half-sister to the 1955 Queen Mary Stakes winner Weeber and the filly in question, Amicable, proved to be an excellent choice as winner of the Nell Gwyn Stakes. More importantly, it is her line that sits today behind Reach For The Moon via Phantom Gold, herself a granddaughter of the Queen’s 1979 Ribblesdale Stakes heroine Expansive.

Stroma, meanwhile, was picked out by the Queen herself during a visit to the Doncaster yearling sales. With a bid of 1,150gns, Captain Moore was able to secure her for the Royal Studs and named Stroma, she was stakes-placed at two but really came into her own at stud, notably as the dam of Canisbay and granddam of Dunfermilne.

More recently, the private purchase of Albany and Cherry Hinton Stakes winner Memory yielded three talented Galileo colts in Recorder, Call To Mind and Learn By Heart while the stud has also welcomed top Australian sprinter Sweet Idea, sourced privately in 2015 out of her native country.

Added to that, the Queen long made use of various international bloodlines, starting in 1963 with the use of Native Dancer on the Nearco mare Near Miss. In time, a significant group of royal mares came to be based in Kentucky, split between Lane’s End and Mill Ridge Farms. More recently, she took advantage of Deep Impact in Japan as well as the opportunities afforded by the Aga Khan and Sheikh Mohammed, between them the sources of Estimate, Carlton House and Dartmouth among others.

The result is that although success may have ebbed and flowed over the past seven decades, the stud has long benefitted from a deep collection of families, some of them entrenched in royal history, others the products of breeders that the Queen undoubtedly held in admiration.

Most importantly, however, her presence in the sport, something that was a magnet for high-powered international investment, must never be underestimated, for all it is likely to have been taken for-granted. She has been a remarkable figurehead for our sport and one that will never be replaced.

As a mark of respect, all racing in Britain has been cancelled with immediate effect.

The ROA issued a statement, saying: “Following this evening’s announcement from Buckingham Palace regarding the death of Her Majesty the Queen, as a mark of respect all racing in Britain will be cancelled with immediate effect.

“The British Horseracing Authority has confirmed that all horse racing in the UK has now been suspended and that no racing will take place tomorrow, Friday 9 September, 2022.

“Further details will be issued regarding the rescheduling of the suspected fixtures.

“As an industry, we mourn one of our sport’s greatest friends, Her Majesty the Queen. During this immeasurably sad time, His Majesty the King and Royal Family are in our thoughts.”

ALL THE QUEEN’S HORSES – PART 1

ALL THE QUEEN’S HORSES – PART 2

Up Next
All The Queen's Horses