The best by Farhh
Stories

The One to watch

The New One is now challenging Hurricane Fly for favouritism in the Champion Hurdle betting after giving a sound 10-length beating to another former Champion Hurdler, Rock On Ruby, on the duo’s seasonal reappearance at Kempton.

The five-year-old, who has now won eight of his 11 starts, sealed his novice season with a scintillating four-length victory over Rule The World in the Grade 1 Neptune Investment Management Novices’ Hurdle at the Cheltenham Festival, before losing out to Zarkandar by half a length at Aintree.

Trainer Nigel Twiston-Davies is never one to talk his horses up and he declared himself “relieved” after The New One’s most recent win before confirming he would now be campaigned with the Champion Hurdle as his aim.

Owned by Sarah Such, The New One was co-bred by Ballylinch Stud, who have enjoyed a good year under both codes. The County Kilkenny operation also bred Group 1 Shadwell Fillies’ Mile winner Chriselliam, while the stud’s manager John O’Connor is the breeder of Middle Park Stakes winner Astaire.

The first foal of the French-bred hurdler Thuringe (Turgeon), The New One is a son of Ballylinch’s late champion jumps sire King’s Theatre, who is also responsible for such National Hunt stars as Cue Card, Riverside Theatre, Voler La Vedette and Captain Chris. 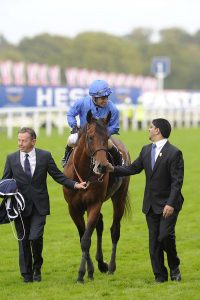 Up Next
The best by Farhh