After two years at the helm of the National Stud, Brian O’Rourke is upbeat about his team’s advances on profitability

Two years ago, the front cover of Thoroughbred Owner & Breeder featured the line ‘The future starts here: how the National Stud aims to bounce back’. Inside, the stud’s then newly-appointed Managing Director Brian O’Rourke detailed how he aimed to get what should be a flagship for the industry back on track following a turbulent spell and its transfer from government rule to operating as a subsidiary of the Jockey Club.

O’Rourke said in March 2009: “The first thing is to re-establish the stud as a commercial stud farm, to get confidence back in the place, especially as a boarding operation. If we can get that, then we can go forward and try to get some stallions.”

So, in the midst of worldwide recession and some of the toughest times seen in the breeding industry in years, just how is the National Stud faring in its bid to regain a foothold in an increasingly competitive marketplace?

“There’s been a big shift in attitude towards us from people using the stud; it’s not just big, it’s colossal,” says O’Rourke.

“They can talk to us. We’re hungry for business. The stallions have been successful and we’ve been lucky in that regard. Bahamian Bounty has been a great servant and Pastoral Pursuits had a bunch of winners from his first crop, plus a Royal Ascot winner and a Group winner.

“People bred to them at reduced fees and did well at the sales so they are coming back for more. We can really feel people getting behind us.”

Goodwill and public perception are important in an industry which thrives on Chinese whispers, but it is also one driven by statistics: sales results and racecourse performance are vital if stallions are not to be written off before they’ve even had a chance to show their true worth. The decent returns posted by the

first-crop yearlings of Cockney Rebel last year will have been a much-needed fillip, as will the recruiting of a precocious son of the late Danetime, Myboycharlie, who has his first foals on the ground.

“The chat from the trainers about Cockney Rebel is that his two-year-olds are very forward and precocious and, on the strength of that, we’ve got more mares to him this year than we did in his first season,” says O’Rourke.

“His yearling sales were fantastic and I’m delighted that his offspring have gone to the likes of Richard Hannon, Barry Hills, Clive Cox and David Simcock. It’s a very encouraging start and hopefully it will translate to success on the track.”

Regarding the selection of Myboycharlie, who is far removed from the stud’s stalwarts of old, such as Mill Reef and Blakeney, he adds: “When we think about the type of horses we want to stand here we have to consider the market. It now dictates that to be commercial you need a horse who will get sharp, early types and will attract a decent book of mares. That’s what the commercial breeders are looking for.

“I can’t go to my investors and say a horse has got 30 mares. They need to be getting 100 mares. It’s all or nothing now. You have some stallions that have no trouble getting 150 mares but some struggle to get to 60 and they’re good stallions. But it’s just the way of the economy at the moment.”

Upon the 500 acres, which were originally leased from Jockey Club Estates when the National Stud moved to Newmarket in 1963, there is provision for up to eight stallions and 200 mares. The stud is currently home to five stallions and O’Rourke admits that he is constantly on the lookout for potential additions to the roster.

He says: “The one thing that’s missing in this country is stallions standing for between £8,000 and £15,000. There’s an abundance of them in Ireland but very few here. The market’s crying out for that and that’s where we’re aiming to go with our next stallion.

“We’re always looking for new stallions and because we’ve been going well financially we now have accumulated a little bit of cash that we can invest in equity in a stallion ourselves, as opposed to pleading with people to stand one here. That’s down to the hard graft of all the staff here in the last two years.”

Along with attempting to reinvigorate the stallion ranks, O’Rourke set about improving the ways in which the stud communicates with clients who board mares at the farm.

He explains: “We had to change the mindset within the stud away from the state-run point of view. There was a stage when, if people rang to ask if they could come to see their mare, it wasn’t always easy to do so. Now our gates are open 24/7. The client is always right and if they want to come at midnight that’s no problem. Our attitude had to change to make it an open shop as opposed to a private club.

“Boarding isn’t where you make your money but you have to give clients what they want and that includes communication: every week we contact every single client to tell them how their mare and foal are. If people are spending £27 a day they have a right to know what’s going on. That has really helped us.”

With O’Rourke’s appointment came a long, hard look at the stud’s finances and one

which would ultimately lead to staff redundancies and to what he refers to as “trimming back the excess”.

“About 15 people either left or had to be made redundant and that was sad as they were good people,” admits O’Rourke. “I was lucky to have the likes of Paul Coombe, who has since been headhunted to manage Kingwood Stud. He played a pivotal part in the turnaround of this place but I’ve got a good replacement for him in Rob Stapleton, who is my assistant now. He did the diploma course and the BHA course, and he’s fitted in really well. I want people who are motivated to go on to do bigger and better things.”

When referring to his team at the National Stud, O’Rourke’s emphasis is constantly on youth and enthusiasm, almost as if a position on the farm is the transitional phase between the stud’s annual diploma course and a role in the wider bloodstock industry. In the National Stud’s twin role as a commercial operation and centre for education, this is perhaps exactly as it should be.

“We have staff who really want to be here and they are the driving force behind the stud’s success,” he says. “We’ve set a very

high standard and we’re not going to go below that. Our staff, our students and our horses are our ambassadors, and if they do well when they go outside the gates the better it is for us.

“That’s why it’s so important to have an exceptional diploma course every year. These people are the next generation and we hope that in years to come they will end up being our clients.”

Investing in the future

With graduates including Lord Grimthorpe, Ed Dunlop and Goffs’ Nick Nugent, the National Stud’s six-month diploma course, for students aged 18 and above, celebrates its 25th anniversary this year. The stud also runs a nine-week apprenticeship course for 16- to 18-year-olds. Students on both courses can now enjoy greatly improved residential facilities at Westbrook House, which opened at the beginning of the year.

Training Director Tabbi Smith says: “The BHA graduate course students are coming here later this year after our diploma course finishes. We’d never have got that with the accommodation we had before. The new accommodation has completely opened things up for us.

“The facilities before were fine but they didn’t reflect the level of the course. The recent investment clearly demonstrates the Jockey Club’s commitment to the stud. There isn’t a short-term aim here, we’re all in it for the long term.”

In addition to the student accommodation, a new lecture facility developed within an old granary and named the Joan Westbrook Lecture Theatre has also opened in the last 12 months. Along with providing for the stud’s own needs it is used for a series of evening lectures on a range of topics, from basic equine first aid through to stallion management and syndication, and benefits from being designed to allow horses to be brought into the theatre as lecture props.

Guest lecturers on this year’s programme include Thoroughbred Owner & Breeder columnist and respected pedigree expert Tony Morris, Joe Grimwade from the Royal Studs and a host of veterinary experts.

Smith says: “The training side has to be commercially run. The facilities are for use by outside groups but they are restricted to equine-related courses and people. The evening lectures were originally just for our students but we have opened them up for anyone who can drive here for the evening.

“We’re incredibly lucky to have the range of experts to call upon in this area to help with these lectures.”

While there’s cause for optimism at a clearly rejuvenated National Stud, O’Rourke is quick to acknowledge that the next few years will continue to be challenging.

“This year and next year for us it’s going to be a case of survival rather than going forward: that’s the same for everyone, we’re all trying to keep our heads above water and that goes right across the board,” he says. “The lack of prize-money has a knock-on effect. Fewer mares are being bred and that had to happen; it’s a harsh reality of the business.”

Despite the difficulties in securing top-class colts for stud duties he remains optimistic the stud’s line-up can continue to be bolstered, with a little help from friends, saying: “Big operations are mostly going to keep their good colts so we have to try to compete at our own level, but there are an awful lot of people out there interested in buying shares in a stallion.”

Two years ago, O’Rourke summarised his position by saying: “If we do turn this around, the pleasure we get from it will be incredible, not least because the mountain is so steep.”

With base camp now stabilised, the attempt on the summit can begin. One of the stud’s former stars, who is buried in its grounds, was the Derby winner and champion sire Never Say Die. It’s a motto which might well be adopted by O’Rourke and his team. 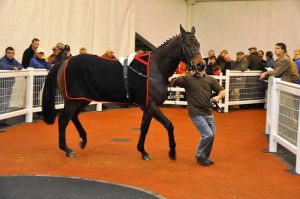 Up Next
Buyers’ demands reflected in changing market